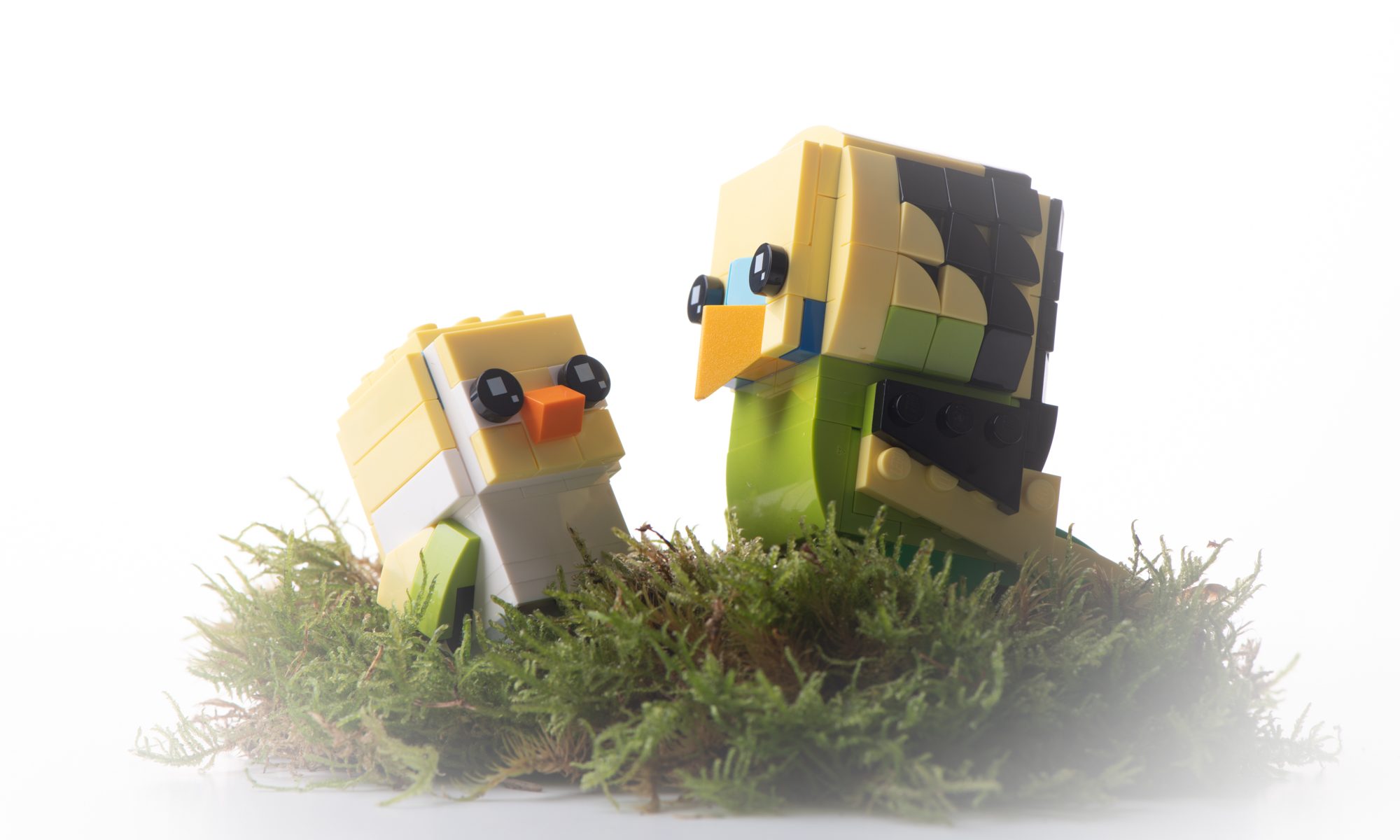 We like our BrickHeadz. We loved them since they were first announced on the RLFM days in 2017 when travel was the most normal thing in the world. And we took our SigHeadz along to Paris the year after. You can even find photo proof of yours truly laying on the ground in front of the LEGO store shooting his sigfig Brickhead. And then they kind of found their place on my desk. Not forgotten, yet not so prominent in the day to day bag of toys we travel with. So when LEGO asked us to review the latest BrickPetz it is only fair to say not everyone in the crew jumped up and down to take these Petz in front of their lens.

They are not as dynamic as the classic minifig.
They are pretty bricky to say the least.
And so a volunteer was choosen.
I ended up to get the fish and chips bird sets delivered for review.

As with any LEGO set, part of the fun is that you can build some bricks in anticipation of the shoot. Or have them build by a family member. And the verdict of our inhouse master builder was clear.
Great little fun build.
And the parrots were claimed for his next Dungeons and Dragons game as special characters.
How cool is that.
Using Brickheadz as DnD props.

Now, this did not solve the creative challenge I still had. To come up with a creative photo shoot. I could do a lifestyle shoot as LEGO did with their press set or I could try something else.

I considered getting the fish in the sea. But it was cold (minus cold), grey snow and icy and my underwater drone was waiting for repairs. So I decided to stay inside the comfort of my own little studio. Waiting for better times to come with spring.

And so when our cat jumped on my desk, I remembered a fun little (non-LEGO) shoot I did a few years ago. A shoot where Ludde took some interest in my subject as well.

Maybe I could get him interested in these little yellow LEGO fish as well.

So, I went ahead and got the studio set up with my new friends waiting for Ludde to show up and give me that curious focused look.

And so I patiently waited for my furred friend to crash the scene and show some interest.

And so what happened to the parrots?

Well, it seems these birdies where a special type of parrots.
The budgie kind of parrot, also known as the parakeet or more officially the Budgerirar.
And I really liked that shoot.
It had a true dreamy spring feeling to it.
Spring is in the air, and I can’t wait to get out (with or without Brickpetz).

Available in a LEGO store near you.

Yes, these Brickpetz are available in a LEGO store near you. And they make a perfect gift for the Brickheadz collector in you. If you ask me, the parrots have the most playability but there are plenty to choose from.

PS. We use an affiliate link to the official LEGO store. In the unlikely event our affiliate link results in you buying some amazing Brickheadz from the LEGO store we do get a tiny kickback which we put in keeping this site free of ads and other intrusions for you all to enjoy.

We definitely need to bring our SigHeadz and do a group photo with them when we’ll be able to travel again and hold a real safari!

Also, we could actually feature BrickHeadz during one of the virtual workshops… I wonder if that could lead to more complaints than Dots :D

That sounds like a plan.
I will add it to our idea list for the summer or autumn edition. Now maybe we can combine dotz with headz :)