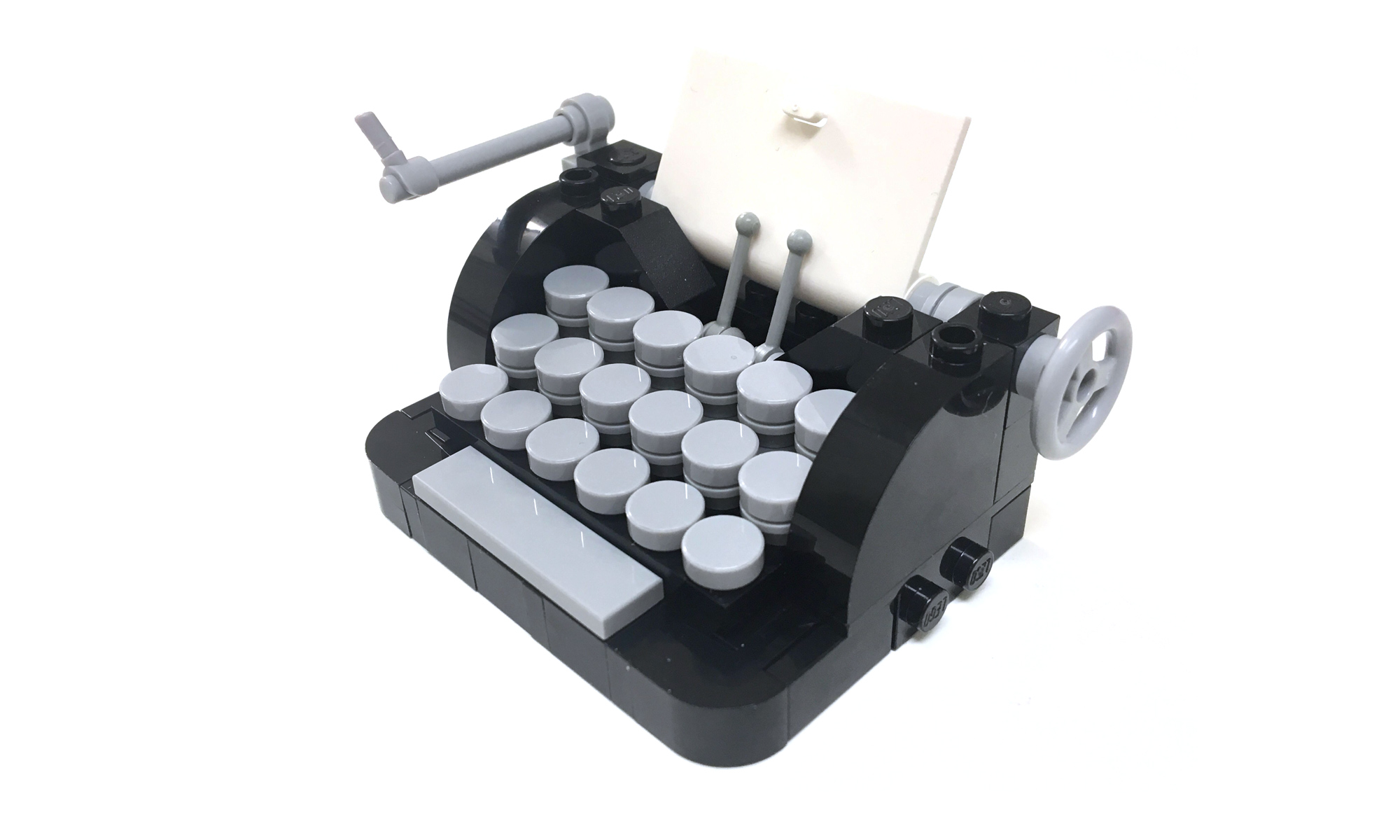 It is Friday here on Planet Earth, and today we went over to Stockholm to sit down and meet with Peter’s Brother. A builder. A toy photographer. A minimalist. An AFOL who makes beautiful .  Our Feature Friday guest.  So, without further ado, let us start at the beginning.

Who is Peter’s Brother?

My real name is Niklas Rosén. I am a 38-year-old AFOL, living in Stockholm, Sweden. I wasn’t born here, my birth town is Växjo, and that is also where I grew up. Växjö is a small town south from Stockholm (a good 400 km south, Sweden is a pretty tall country). The handle Petersbror, which I use on Instagram and Flickr is a nickname me and my brother Peter came up with. He is my brother (bror is brother in Swedish), and he started calling me Peterbror. With him it’s the other way around, I call him Niklasbror.
Weird I know 😊
I guess that is what brothers do.

I am a family man, wife, and two kids, living in a house in Sundbyberg, a suburb to central Stockholm.

What is Niklas doing when he is not playing with Bricks ?

Mostly family stuff. There is a lot of routine for me because my children are pretty young still. I work at a small IT-company that’s providing a software for e-learning. I’m a key account manager and help our costumers with what they need. For example, I do loads of voice over, spending my time in a studio recording. Not playing with LEGO.

Where did the love for the Brick (re)start?

As a young kid, I spent a lot of time with my bricks. At that time we didn’t have a phone or a computer packed with games like we do today. So I spent much time building stuff. I went through my dark ages (as many other adult fans of LEGO did), but I never stopped thinking of LEGO I guess. I would say I picked it up again like 6 years ago when I came over the part list of the iconic set 10179 – Millennium Falcon and made it my project to gather all the pieces. It was the first time I found out about Bricklink.com. And that made it possible for me to finish the project.

And that is when you started AFOLs of Sweden?

Not really, it was a couple of years later.
I don’t know why I did it really. I didn’t have anything to show but I met some people in the same area (parents to my son’s friends) and I understood that some of them talked about LEGO in a different way. It was more passionate and interesting than your average parent interest. So I started the FB group Adult fans of Lego – Järvastaden. Järvastaden is the name of the area I live in. Outside people started to apply to the group as well and I started to meet people at the LEGO store so I decided to rename Järvastaden to Sweden.  Since that day the group is called Adult fans of LEGO – Sweden and contains more than 3000 Swedish AFOLS which is amazing I guess.

It is. From Järvastaden to Sweden and 3000 passionate AFOL. Awesome. So, moving forward to today. Only a year ago, you created your IG account as petersbror and posted the iconic sewing machine.

Correct, the sewing machine was my first micro build. I often tell people that ask me about my MOCs that it is a piece that gives me an idea, but actually, it was my mother in law that took the sewing machine out from the closet and that is where it all started.

And why did you choose IG as your platform of choice?

I would say most AFOLs and artists want feedback of their work. A form of confirmation that they create stuff people enjoy and like. I saw IG as a great tool with the “#”-function to reach out to the world and get confirmation that my skills as a creator are developing.

Yes, 7 pieces is the correct answer (starts laughing). To make small models with as high recognition is the challenge for me. To create big models with unlimited pieces is not a challenge, it is to create simple and low piece amount models that is the stuff for me.
I often find a piece that I see potential in and the piece determines the scale of the finished model.

to one your most iconic pieces, the typewriter. And your first post in English.

the typewriter. It is actually one of the models (or is the one) that I have gotten the most attention of. It appeared in TBB (The Brother Brick blog and in Blocks magazine)
Why did I create it?
The recognition I would say.
I really enjoy the technical development and new innovations, but it goes to fast. If I would show my son a VHS-cassette he would have no idea what it is or the use of it.
Everything goes too fast.
The typewriter was a way for me to “go” back to my legoroom as a young kid when the typewriter still “existed”.
Like going back to the past.
Take a break.

Your most favorite model and why?

I would say the antique clock. The combination of warm gold, white and light grey makes a wonderful impression.
I also think it’s very realistic and from a distance, it even harder to tell its made out of LEGO.

I also like the small cars because of the really small scale.

And I really liked the Lasse Åberg one. So where do you keep all your models?

Lego is not for display 😊(… starts laughing again).
I don’t keep them, I build, shoot and put all the pieces back in the sorting boxes.

Three more, because we could keep going.
Most interesting comments to date.

I would say the airbrush one. I don’t remember where, but I got a comment from someone, including an angry emoji “shame on you….painting lego”

Most talked about (besides the typewriter)

The floating tap one I think. Very few pieces, only six of them (or seven?! 😊)

I can’t take credit for this oneFast forward have a memory from when I was young. I saw a fountain designed as a tap. The construction holding the fountain was hidden inside the pouring water.

Most interesting one (we didn’t talk about so far).

My last published moc, the train – or locomotive.
The steam vessel is actually an upside-down technic canon. I think they are still in production in the Ninjago theme.
A piece that is hard to do anything with, except shooting.
Or turning it into a locomotive.

About your IG Portfolio:  There are about 50 images online. Is it one a week? Are there some that did not make it? And why?

I have my productive periods and some periods I don’t enjoy creating stuff. Some weeks I produce 2-3 models and some weeks only one, but most weeks none 😊
I have ideas all the time, but some are not made IRL.
Still looking for the right piece that could pop up anytime while sorting pieces.
I think all ideas will, but it takes more time for some to see daylight.

So how do you photograph your builds?

Today, I use my iPhone as I don’t have professional stuff at home ( tell Apple). I use a lot of light and I mostly increase color and exposure to get the white background. I would say I take around 200 images of each model and look for the one to use. I am sure we can explore this one more …

So what is next …

I have had a project going for almost a year now, and it’s a chessboard. I really think its gonna be my best work to date…

Aye, and we will be coming back on that in the near future. Now on to the last question for today. What was the question we forgot to ask?

We really enjoyed bumping into Niklas and cannot wait to take a closer look at his latest creative project. If you are not following Niklas aka Petersbror on IG (or Flickr) now is a good time.

Go and enjoy his micro builds …

Hej Niklas, really happy to have you here on Feature Friday. Your work always attracted me as being both minimalistic builder and photographer alike. I really like it, and can’t wait to explore more :)

I really have to thank David for sending me over with that tree of creativity this spring :)

And there are still people who say that social media is making people lonely. Rubbish. I can’t believe I didn’t know Niklas before this article. If I was a builder I’d totally share his minimalistic approach for new MOCs. Thanks, Niklas, dir sharing your visions and thoughts on here with us!