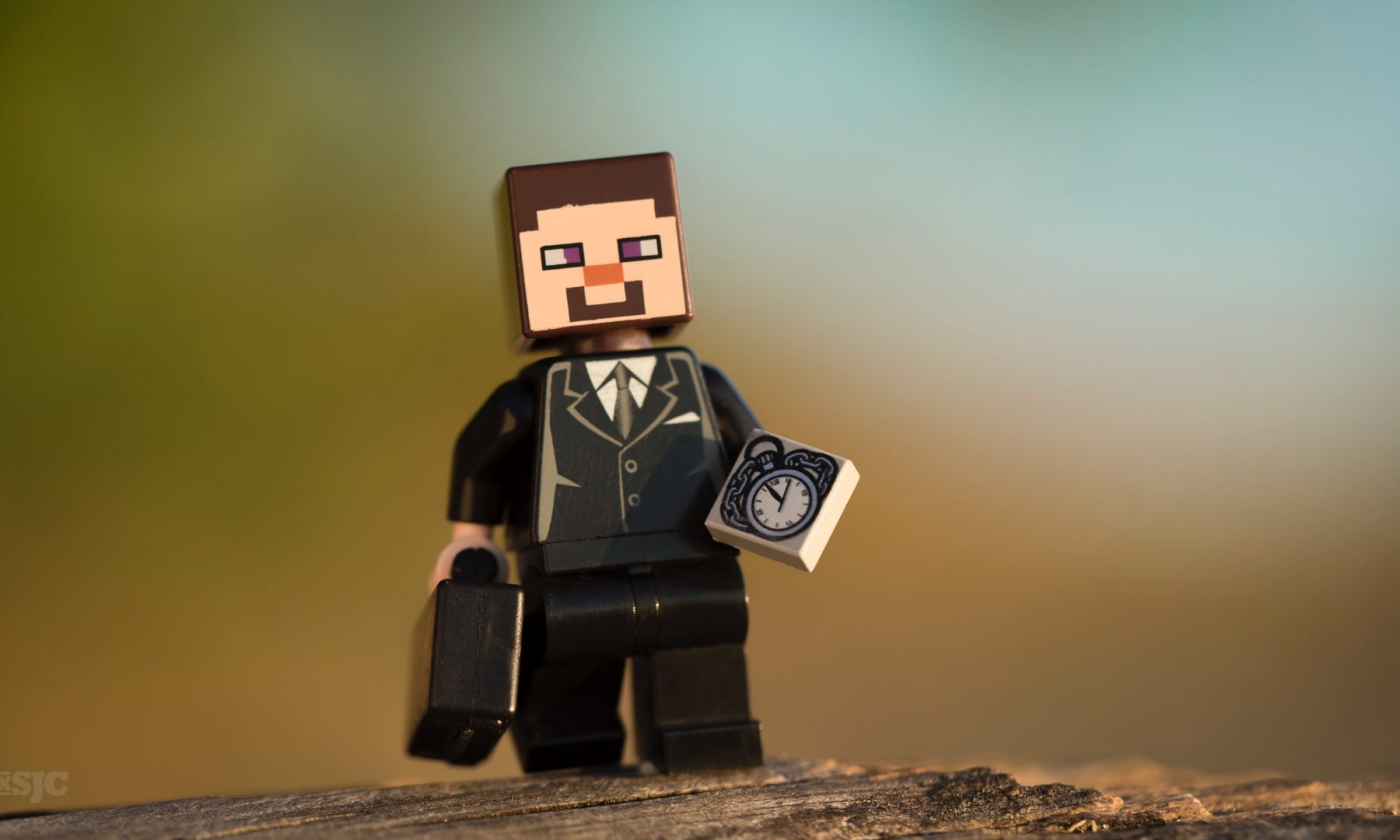 First I want to thank The LEGO Group for sending Minecraft set 21128, The Village, for me to review. You’re probably thinking: Minecraft? Really? On a photography blog?  But honestly, I have a soft spot for Minecraft. I’ve photographed Steve in Sweden, on the top of Rattlesnake Ridge and in the local park. Who can resist that square head?

If you know any boys between the age of 7-14, I’m sure you’ve stumbled across the world of Minecraft. My own son has spent a good part of his childhood building elaborate worlds in “creative “ mode. When the first Minecraft micro sets were introduced through the Ideas theme, it seemed as if we were first in line. He has since collected all the micro builds as well as almost all the regular sized Minecraft sets. My living room has a rather large area devoted to Minecraft building and play.

As you can see I’m no stranger to world of Minecraft and somewhere along the way I fell in love with Steve and then Alex. I’ve always been fascinated by not only Steve and Alex but the Endermen and now the new Iron Golem. There is something compelling about the unscripted story of survival, creativity and constant building that goes on in this strange world made of blocks. I’ve always felt that playing Minecraft in “creative” mode has a certain similarity to building and playing with LEGO bricks.

This is why when I received an email from our contact at LEGO to see if anyone at the blog wanted to review The Village, I was more than intrigued, I was rather excited.

Last weekend my son and I sat down, opened the rather large box that is The Village and proceeded to build the set together. We spent several enjoyable hours together over two days building this set. We talked about what is a Minecraft Village (a place for Villagers to trade and be safe from nighttime dangers as well as a chest in the Blacksmith shop that can be looted), he explained the villages origins (they occur naturally), and we talked about the differences in the LEGO version and the game (no loot chest in the blacksmith, mushrooms aren’t found in villages and there are no markets in Minecraft villages). I learned a lot about the game and the characters and I had a nice time connecting with my son about his current passion.

Because Stuck in Plastic is a photography site I’m not going to bore you with a technical review. If you would like to read a complete review of this set, please go here or here. I will say that building The Village was a rather dull experience enliven only by our tandem building and our lively conversation. Of course since we were both more interested in the final product we didn’t mind. He was looking forward to the joy of playing with The Village and I was looking forward to those eleven mini figures.

The set comes with both Alex and Steve, a Pig and a Baby Pig, two Villagers, a Zombie and a Zombie villager, a Creeper, an Enderman and the Iron Golem. So far I’ve had a chance to explore with Steve, Alex, the Iron Golem and the Endermen. I look forward to seeing what I can create using the Pigs and the Zombies. Maybe I will introduce a certain T-Rex to this crazy cubed world?

I think I’m attracted to the world of Minecraft for the same story telling possibilities I find in the Chima world. In the world inhabited by Steve and Alex, they have no backstory, they can be anything I want them to be. Since I’m both a seeker and a storyteller in my photographs, it’s natural that I would be attracted to these virtual blank slates. I’m not constrained by a well worn storyline, I can make them be and do anything I want. It’s very liberating and more than makes up for those square heads.

My biggest complaint about the Steve and Alex mini figures, is that after fourteen sets, they only have one facial expression. I find this very frustrating; I think at least one scared expression would compliment the world of Minecraft rather well. But then I’m thinking like a toy photographer / story teller, not a LEGO designer. Maybe in the next round of Minecraft sets, LEGO could offer a new ‘skin’ for the two main characters?

It always takes me some time to get in the swing of a new figure, so these reviews do not come easy or fast. I like to have time to  think about the character and decide how we’re going to tell stories together. I know that these Minecraft characters will populate my stories for months to come. But until those stories start to make their appearance, I hope you will enjoy these images I made over the last two weeks.

How do you feel about these Minecraft figures? Have you collected any? Have you photographed them? If so, how did you find the experience?

Nice article. Somehow I didn’t think this was you writing, so I was a bit surprised (I don’t know why)..

Hope to see some of these (and upcoming) photos on instagram..

Really? I tried so hard for this review to sound like ‘me”. Is it because you couldn’t imagine me liking Minecraft or is it the concept of the reviews on the blog? I would love your feedback on whether you like the reviews. So far the response has been rather mixed. Also, I’m sorry its taken so long to respond back, I’ve been traveling. :D

I don’t mind reviews on the blog when they are accompanied by gorgeous photos like these :-) Your photos make the minifigs look way more interesting than the standard review :-)

Thank you Lynn! I think its rather pointless to talk about the sets interns of building. For me its all about the stories and what kind of images do the character inspire. I’m glad you like the photos! That makes me very happy. :D I’m hoping I will inspire a few people to try out this mini figures. I’m taking them with me to Colorado this week and I will see what I can do with them. I have some lovely mash-ups in mind. Stay tuned!