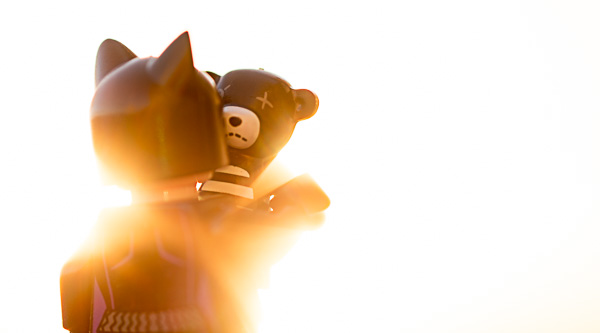 Reading Me2’s latest post about location as one of the key elements of his photography got me thinking about the name of this group ”Stuck in plastic” and the close connection our work has to the Lego brick. Lego has a special place among my toys and especially in my still life photography.

I have strong childhood memories playing with my brother’s Lego bricks. Once they had built a model and played with it, most of the pieces ended up in our common Lego-brick-box. I had a soft spot for the “Lego-people”; they were the first I looked for in the common Lego-box. After I had found one or two, I could start building with the bricks. I remember that I used to build colorful houses with windows that had shutters and sometimes, I remember, there was a door so my ”Lego-people” could walk in and out. The best houses were those with roof bricks on top but most of my houses had pyramid-roofs. As a child I played with Lego to make a life for my “Lego-people”.

It wasn’t until I had children of my own that I realized that I never had built a Lego set of my own, most likely because I never had any Lego-sets of my own as a child. Building sets had little or nothing to do with how I played with Lego. And reflecting on my toy-photography makes me realize that one of the key elements in my pictures is that now as an adult, I still play the same game “make a life for the “Lego-people””, just as I did when I was a child.

I started my toy-photography by “borrowing” my children’s plastic toy-people and I have never returned them. With the Lego-sets I buy, I only take the Lego-people-figures and then let my children build the sets. It’s around the “Lego-people” I build my stories, and my photographs, just like when I was a child. In a new Lego set, I start by looking up the lego-figures and then I hold on to them tight, trying to set a scene. Most of my Lego-figures only become part of one or two shots because I have a hard time working with  different characters specially if those have a bright Lego-yellow-heads (but I’m trying to learn).

Do you want to play with plastic toys in a photographic-context and are you in Seattle on Saturday, the 7th of November 2015? Then  you should come to Bryan Ohno Gallery to take part in our toy-photography workshop. You can sign up here.