We all have our favourite LEGO minifigures, those little guys that keep jumping up begging to be photographed. I thought I’d try and pick my five favourite figures from the ones I own, which is quite a few!

I thought it would be easy. In my mind I had already picked a handful of my most commonly photographed figures, but as I searched through my boxes of heads, torsos, and legs to take some quick photos of them, the task just kept getting harder. I discovered that I had a lot of affection for some of those lesser photographed figures and ended up with a shortlist of 12. There are some beautifully designed figures that I have rarely put in from of the camera.

So after much deliberation, these are my current favourite five, with some ‘also rans’ thrown in at the end. 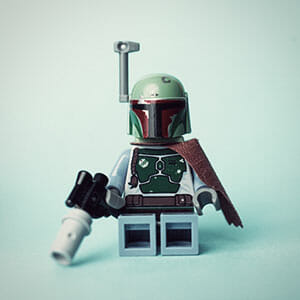 The latest LEGO Boba Fett figure is a thing of beauty. The iconic helmet is perfect, the decals are spot-on and the little shoulder cape is a great addition. I find him a bit difficult to photograph as, to me, he’s always got to be the cool guy in the epic pose which limits his range. 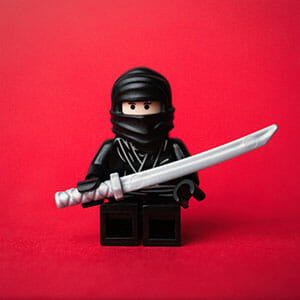 The mysterious ninja has always been a favourite of mine. There’s a lot of cultural history to draw on when creating photographs of these guys, they just add a sense of mystery, power and efficiency to a photograph. On the downside they’re often a pain to light because they’re all black (I know you can get other colours, but black is the only ninja colour for me). 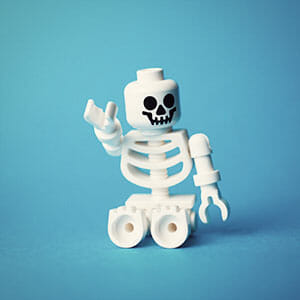 This was one of those surprises I found when digging around in my box of mining parts. I’m not sure when this skeleton was introduced, but the modern ones only have a single axis of movement in the arms. This guy has ball joints and can flail his arms about wildly, which is why I love him. I’ve only got the one skeleton of this type, and I don’t photograph him very often, but I might have to fix that. 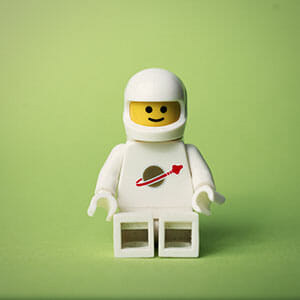 The classic space series was the first LEGO series I remember from my childhood, and the naive simplicity of the astronaut minifigs perfectly captures the essence of the whole classic space series: it is in no way realistic or practical, it’s just adventurous fun. The later astronaut figures have mirrored helmets, pressure suits and EVA jet packs, but these guys from the 80’s just turned up on the moon with faceless crash helmets and a couple of scuba tanks strapped to their backs. Brilliant. 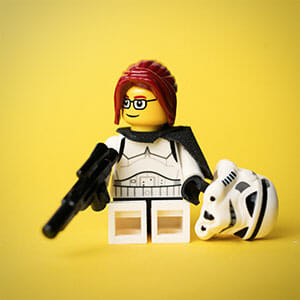 I realise my number one is probably no surprise to most of you that know me. The Stormtroopers have provided me with more photos than any other figure by quite a wide margin. My current favourite configuration is the body and legs from the latest Star Wars Rebels trooper with the super-nice decals, but the helmet from the second generation of the original trilogy (the first generation helmet had the tiny moustache!). They’re just so versatile!

Those that didn’t quite make it

It was tough not to include any of these guys. I love the design of all of them, even though I don’t photograph any except Darth and the Snowtrooper with any regularity.

So which five would you choose?

Very nice choices on your top five. I know its never an easy choice to narrow it down to just a few.

I have a plethora of the older skeletons with articulated arms. Let me know if you need an emergency shipment to bolster your collection. Because you know, floppy arms are so much better. :-)

my favorite 5 would be little dwarf warrior with the giant winged helm, original skeleton with the old glow in the dark ghost over the top, chewbaka, old han in carbonite, wicket the ewok, and the small rock raiders rock monsters.

Old Han in carbonite? I have one from the original Slave 1, he barely counts as a minifigure :D

David these are really nice, thank you for sharing. :-)

Thanks for compliment Shelly.

Great idea. I would like to see everyone’s favourites!