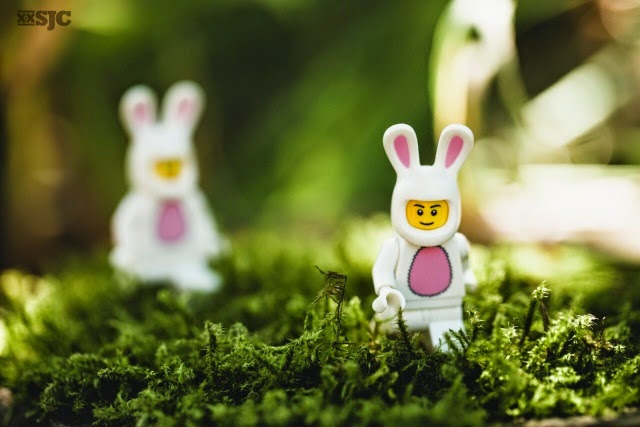 I try to not talk about projects I am working on until they are completed. There is this weird phenomena that takes place if you talk about a project too much…it never happens. At least that is my personal experience. This is why I am just now telling you about my all consuming fall 2014 project: recreating Margaret Wise Brown’s classic children’s book The Runaway Bunny using Lego photos that I took.

You may have noticed an increase in Lego bunny rabbit shots on both this blog and on my Instagram feed last fall and now you know why.

I was approached last spring to do a Lego photography book based on Herman Melville’s Moby Dick but that project fell through. Even though I was disappointed by this, it did inspire me to look for another similar project. I dismissed Moby Dick and several other books, both short and long, for a variety of reasons and eventually settled on The Runaway Bunny.

I set myself a strict deadline of December 1st for completion so I would have time to get it printed and wrapped up for my children by Christmas Eve. (I have found looming deadlines to be a good defense against the inevitable procrastination.)

I had a great time on this project and discovered some shots, like this one, were fun and easy to get.

While others, like this one, I chased for several months.

If you were a recipient of my Best of 2014 Legography book you know that two of the images created for this project were in my top 12 for the year. I couldn’t have been more pleased with how my first completed book project turned out.

Here is my initial take away on the project:

Now that I am free from the constraints of this book project, my typical free form style of shooting seems rather boring and meaningless. I guess it is time to look around for another book project!

Do you have any suggestions for a book you would like to see recreated with Lego photography?

Oooh like very much. I have to admit not a book I’ve heard of considering I love reading and my YS is rabbit mad. It also ties in with the twist to my lego photography project for this year, as I too needed to try something a little different to re focus my creativity, mind and photography skills. So I decided to do all the images this year based on book titles……great minds think a like and all that jazz!

I think working with in a specific framework can be very freeing. Too much choice can be overwhelming. I like how you have zeroed in on book covers for the year. I look forward to seeing the results! (Btw: What is a YS?)

What a coincidence! I was just talking with my agent yesterday — she represents the estate of Margaret Wise Brown — and I told her my husband and I are the Runaway Bunny parents because we’re moving to New York City where both our kids now live. And it turns out the apartment where we’ll probably end up (assuming we can negotiate the rent and other issues) is around the corner from our daughter’s apartment. Runaway Bunny was one of their favorite books as children too.

Lyn, it is a very small world indeed! It is a wonderful book. If you ever want to see my version let me know and I can send you a copy. :D

So cool! I would love to see the finished product! I too find that working within a specific framework can make the process more meaningful. I had noticed that the bunny pics seemed to become more frequent in your feed and had wondered if there was some brilliant project like this in the works. ;)

I will being a copy to Vegas for you to see. The results aren’t perfect, but it’s a start. :D

I’m curious, was the bunny book for commercial or personal use?

I had a similar idea in the run up to Christmas, of telling a story through a series of photos, but didn’t get the creative spark to get it off the ground.

Mike it was mostly for personal use and practice on working within a story line. Of course if the opportunity came for commercial use I wouldn’t turn it down. The next book needs to be in the public domain, a parody or original text. If you decide to do a
book I would be interested to see how it comes along.