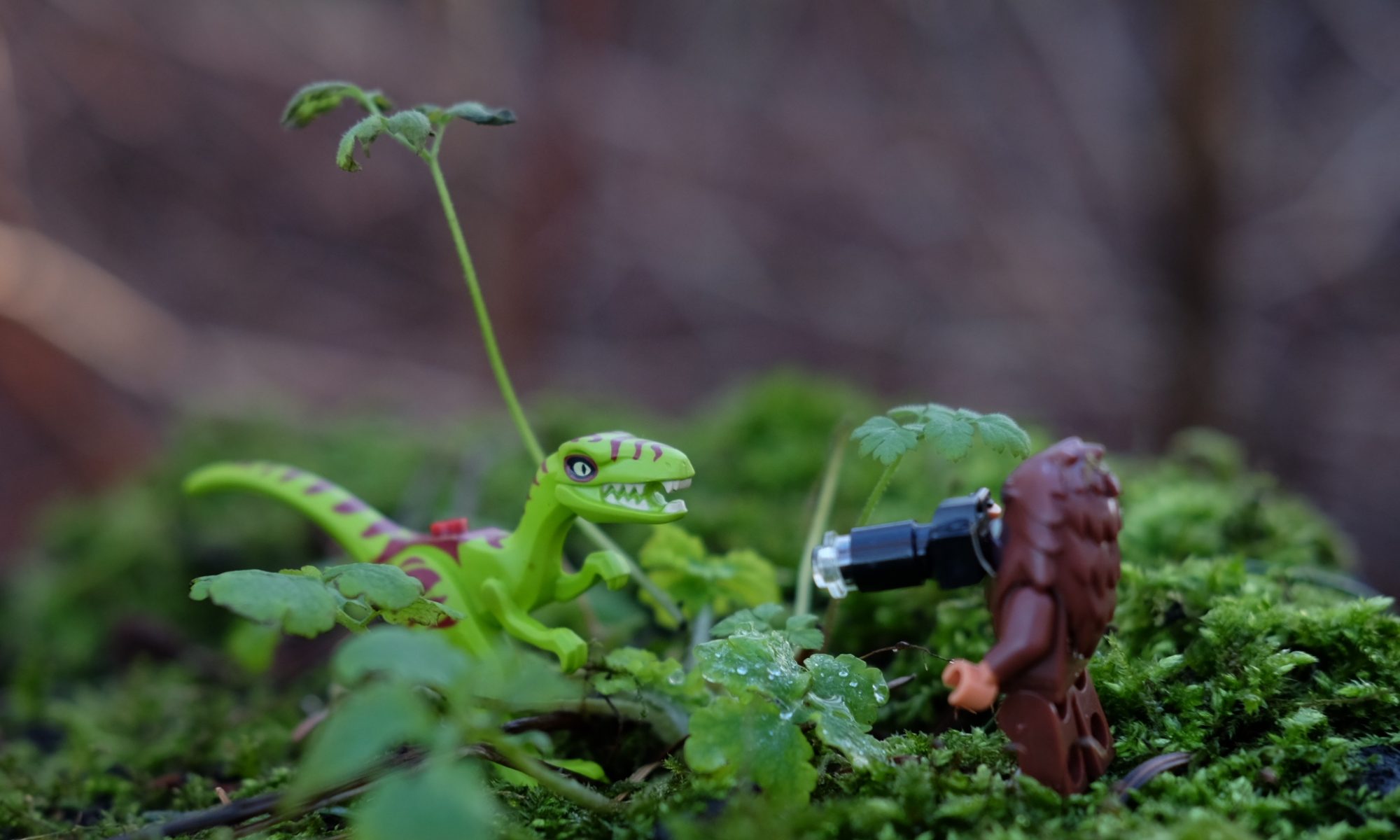 not long ago, i received a flickr mail, inviting me to submit some of my minifigure photos to a photo competition. initially, i was flattered. after all, who doesn’t love that feeling of belonging that accompanies being invited over to play? plus, it meant that the person inviting me had noticed some of my photos (even tho’ they’ve been few and far between of late) and that’s good, right? so, i found myself purring like a happy kitten. END_OF_DOCUMENT_TOKEN_TO_BE_REPLACED 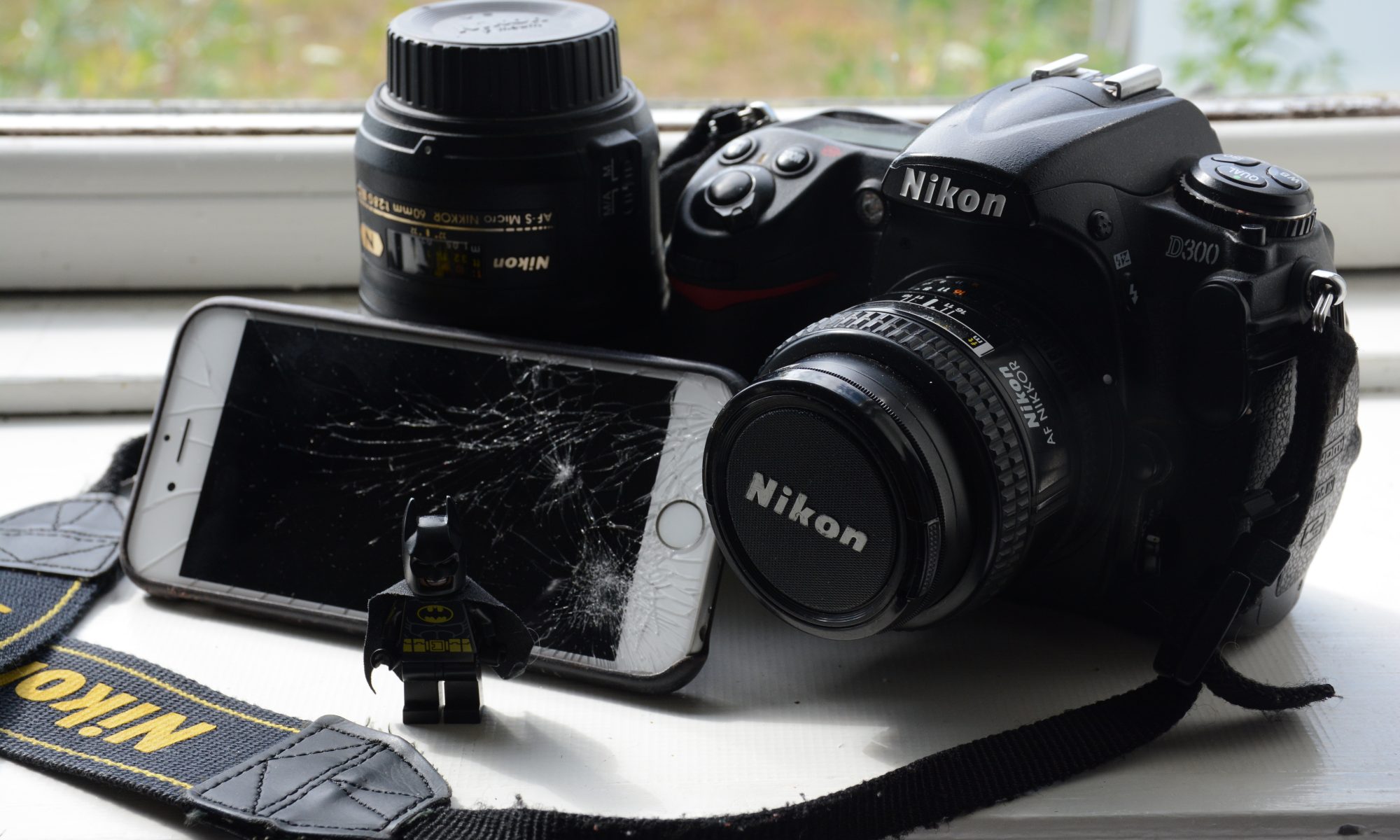 i’ve been perusing all of the “what’s in your bag” and “favorite five” posts here on #stuckinplastic and it got me thinking. i’ve been doing a daily photo project since soon after i got my first dslr (a nikon D60) in 2008, but i do it more for the daily memories and out of mindfulness than because i feel like a Photographer or legographer, so it feels odd to imagine sharing my camera bag. END_OF_DOCUMENT_TOKEN_TO_BE_REPLACED 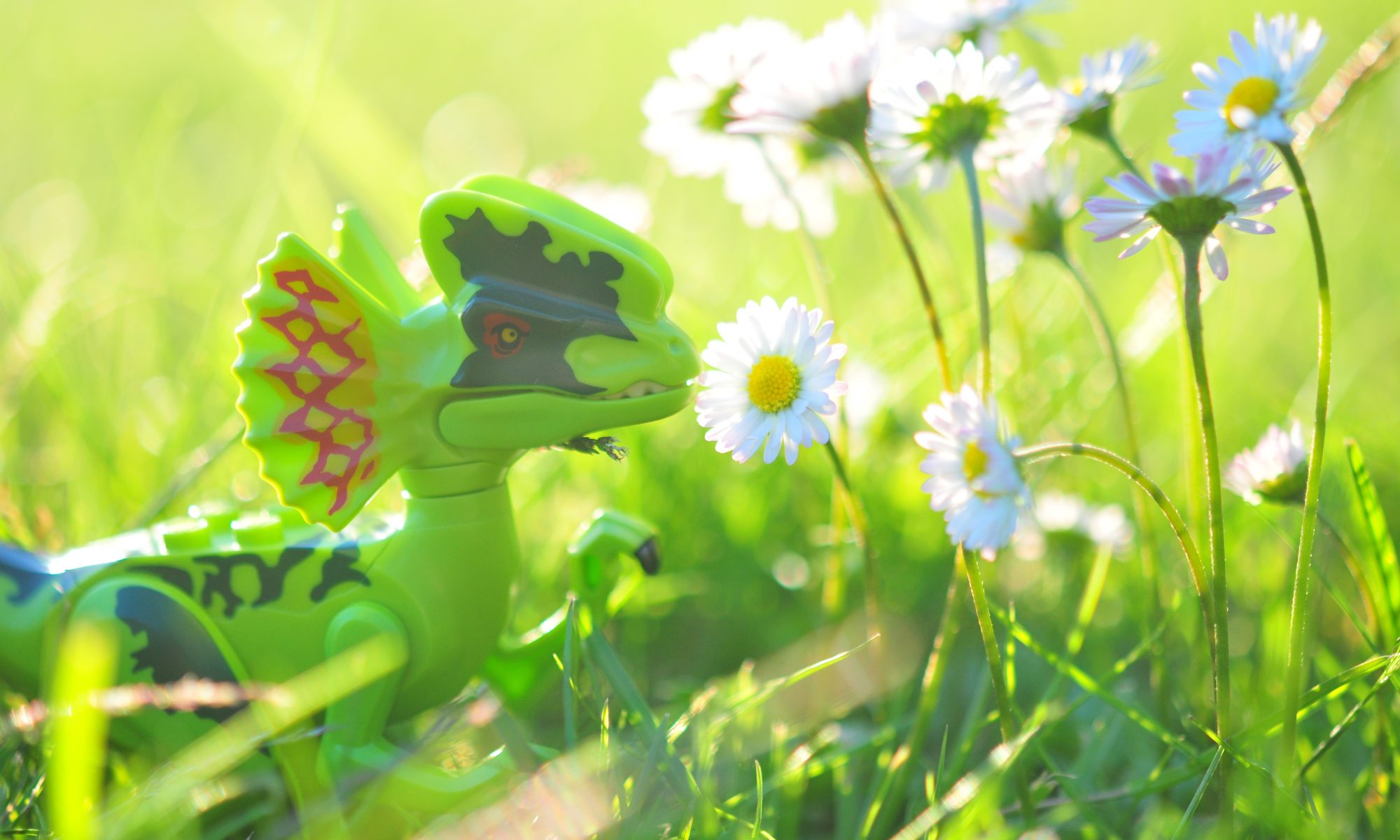 i recently had the good fortune to interview one of the LEGO designers behind the new jurassic world line-up (look for that piece in the upcoming issue of Bricks). and it rekindled my childhood love of dinosaurs.

as a kid, i loved hunting for fossils out at the river (the river being the missouri). i found various shells and plant bits in the shale and marveled that they might be as old as 60 million years, even tho’ i couldn’t really even grasp that number.

i always insisted that we stop at every touristy rock shop in the black hills and i scoured the ground on scorching summer days in the badlands of south dakota, hoping to find a tooth from a saber-toothed tiger. i dreamed of being a paleontologist, but abandoned those dreams early, thinking that everything would already be discovered by the time i grew up (back then, growing up seemed so impossibly far away).

i thrilled when i read of the discovery of sue, the most intact t-rex fossil ever found – you guessed it – in south dakota. (so i was kind of right, all the good stuff was already discovered.) i loved that sue ended up at chicago’s field museum, where i could visit her, since i was living there at the time. and although i moved to denmark before she was up and on display, i did go back and visit her a time or two anyway. and she is magnificent.

all of this came flooding back after my interview with nick and i had to get me some dinosaurs. now, on these long, light summer evenings, i can lay on my belly in the grass in our back yard, posing my raptors and my dilophosaurus in the glorious golden light and dreaming of all those fossils out there, yet to be found. 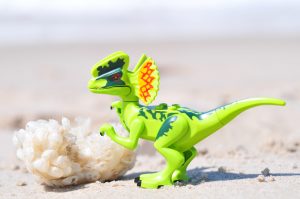 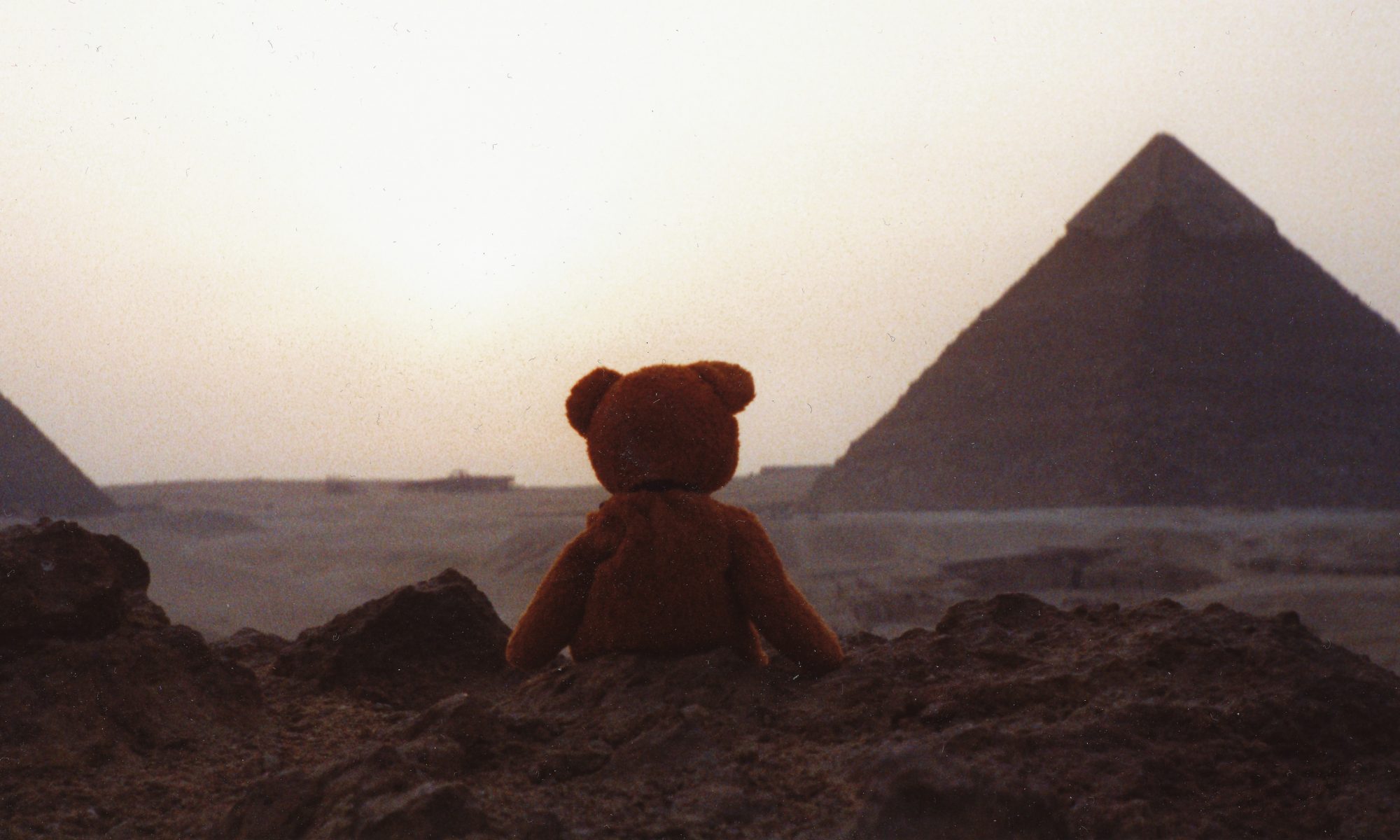 i came across some old photos recently and was reminded of my old friend fuzz. fuzz was a little scrunchy beanie baby. do you remember those? they were all the craze for awhile back in the late 90s.

nearly 20 years ago, when i was a serious graduate student on a fulbright scholarship to macedonia, i took fuzz everywhere. he’s been to the balkans, istanbul, russia, sweden, denmark, london and germany. and yes, he’s even been to the pyramids. i always had him in my backpack, sometimes riding on the outside, but often stuffed inside. he was imminently stuffable and didn’t mind it a bit. i could always whip him out, fluff him up a bit and pose him wherever i wanted. he saw all the sights.

i liked photographing him from behind best. he somehow seemed most thoughtful that way. it became a bit of a game to see how much expression i could get out of him without showing his face. even tho’ i was using one of those kodak advantix cameras in those days. you remember the ones? they were a film camera, but they had the gimmicky feature of allowing you to adjust between three sizes of photos along the way, including a panorama. i tried to save the panoramas for special occasions. honestly, i enjoyed that camera.

my favorite photo of him, i took at the hermitage museum in st. petersburg. he was posed looking wistfully at the fog out of a rather dilapidated window.  unfortunately, i didn’t come across that photo in the stack of photos i found, so i can’t share it.

the best part of that photo was that one of those old russian ladies who sits impassively on a stool in the museums, sternly frowning at the guests, lest they do anything like dare to touch one of the paintings, was so charmed by fuzz that she even pointed out several other places i should pose him for his picture and thanks to her he got to sit on some chairs that were otherwise roped off. so much fun for me, but i also think it was fun for her – a little bright spot in an otherwise boring day of frowning at people who got too close to the matisse. i’ll bet she still remembers it, just as i do.

maybe it’s actually a good thing i can’t find that photo. possibly it’s much better in memory than it was in reality. 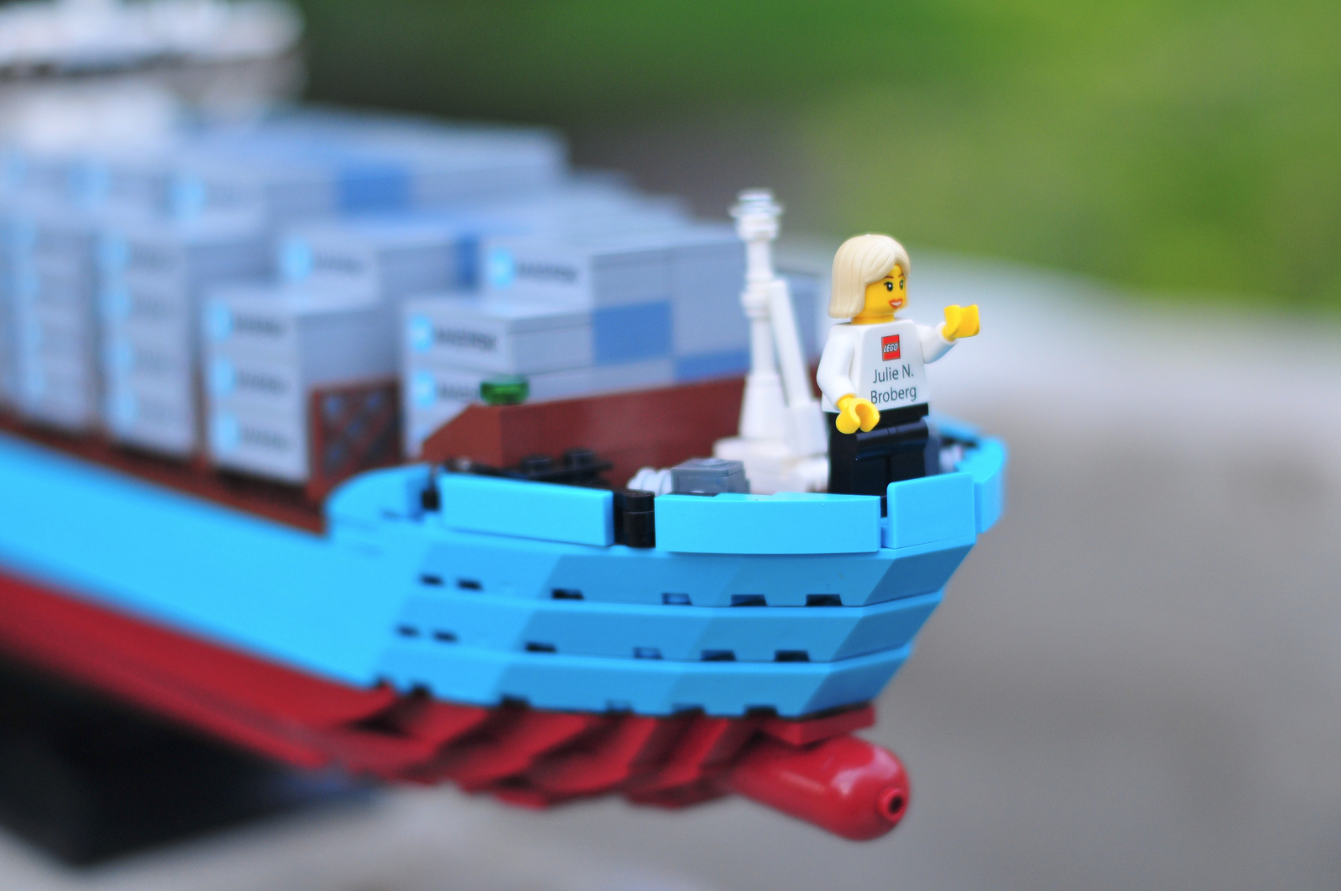 it was july 7, 2013. i was in a long line at the grocery store. it was a summer day and sunshine-starved danes (yes, we are often starved for sunshine in the middle of the summer in denmark) were piling their baskets with grillables and rosé and rushing towards the register, to get home before the sunshine left again. the line was long and there was no sign of them calling another cashier to open another register, so i was stuck. as i was waiting, i glanced to my left and there was a display of small, shiny, colorful bags of LEGO minifigures. prominently depicted on the package was a minifigure of a guy in a chicken suit. i had a brood of hens at home of which i was inordinately fond and i thought, “i’ve gotta have that chicken suit guy,” so i grabbed a couple (or three) bags and tossed them in my basket. END_OF_DOCUMENT_TOKEN_TO_BE_REPLACED