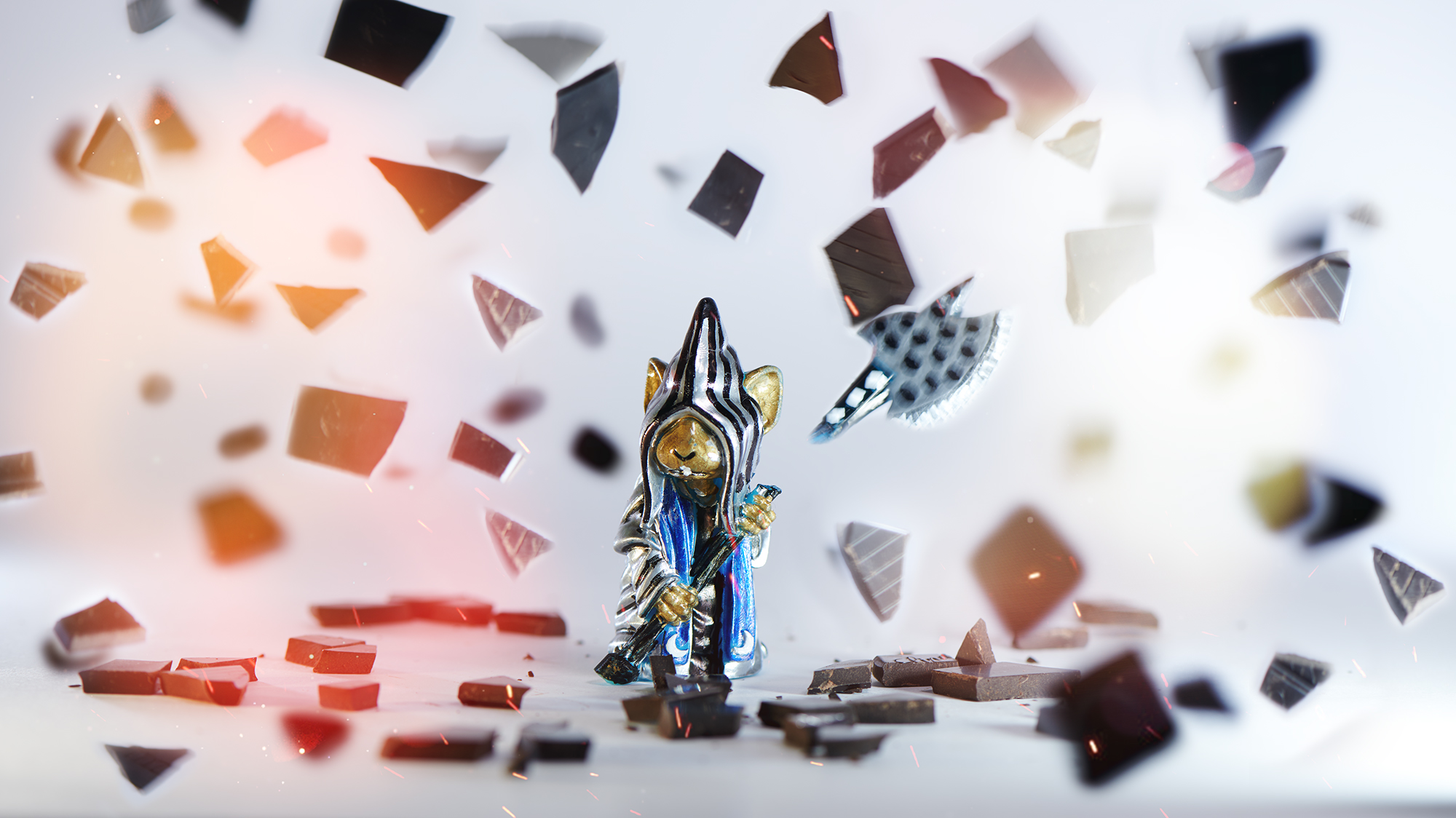 Let me tell the story of when the world almost came to an end due to the lack of chocolate eggs for Easter.

Once upon a time, SmashMouse was playing with a big Easter egg and broke it accidentally. The egg was shattered into multiple parts that were scattered all around the world.

I was there and saw it happen. I sent messages all around the world so that local heroes could help us collect the pieces… and hopefully, save the world so that we wouldn’t starve on Easter without our chocolate. And so the epic quest of our time began.

As Kai-Uwe was living close to Natasja, he was the first to receive his letter. Up in a tree he spotted a silver fracture of the giant egg. With his enormous throwing skills, he sent the egg off into the sky, leaving a pink trail…

Babou received a letter with a gift of nail polish to convince him to join the quest for the Easter egg. After battling hundreds of villains, he found the missing egg piece and sent it back using his magic powder.

Amethyst was enjoying the sunny day in the Gem Kingdom when she received an urgent message from SmashMouse. A piece of the egg had landed in her kingdom and this needed to be found to rebuild the egg. Others in other kingdoms were also on the same mission to restore the chocolate egg. Where should she start exploring? Maybe within the Gem fields? She set out on her quest to find the piece and send it to Micki to save the chocolate egg. After searching the fields and finding a few local treasures, she discovered a large shiny silver piece that did not belong in the gem fields. What could this be? IT WAS THE CHOCOLATE piece!!! In a hurry, she dug up the piece using her sword and sent it onto Micki. “Had the others also found their pieces?” she wondered before going about the rest of the sunny afternoon.

After receiving his letter, Tom found a big white brick and struck it with an arrow.

The Chameleon Warrior was looking for the missing egg pieces in the chrome magical cave, with the unfolded envelope on the ground, with the revealed map!

Ocheeva found the egg with the help of her trusty raptor pet. She sent the egg to Micki by sending the mother T-Rex as a pigeon post.

Kiki-Jiki had received the help call and he adventured himself into a mountain site tunnel to find the egg missing piece lost at his underground world, and send it back to where it belongs.

General Ericius was ready to settle down to retire when he received an important letter in the post. It’s time for battle again as he heads out to reclaim his piece of egg from the evil army of chicks.

Ziggy found out that there was a missing piece in a bird’s nest and had to find the right piece between the real eggs. He then sent the egg by butterfly to Micki.

Dumphrey eagerly set out to find his missing egg. Journeying deep into the forest, it’s nowhere to be seen. He almost loses hope that he will ever find it. Until with a cry, he spies it nestled in the undergrowth.

Undenounced to everyone, Tussi, who had a special grudge against one of the heroes, also received a letter. He learned exactly how the team was planning to fix the Easter egg. When the egg was almost complete, Tussi tried to sabotage the mission. He created a special bomb to try to damage the Easter egg.

Finally, Be_varrrle placed the egg back in its rightful place and sang a song to let everyone know it is safely back.