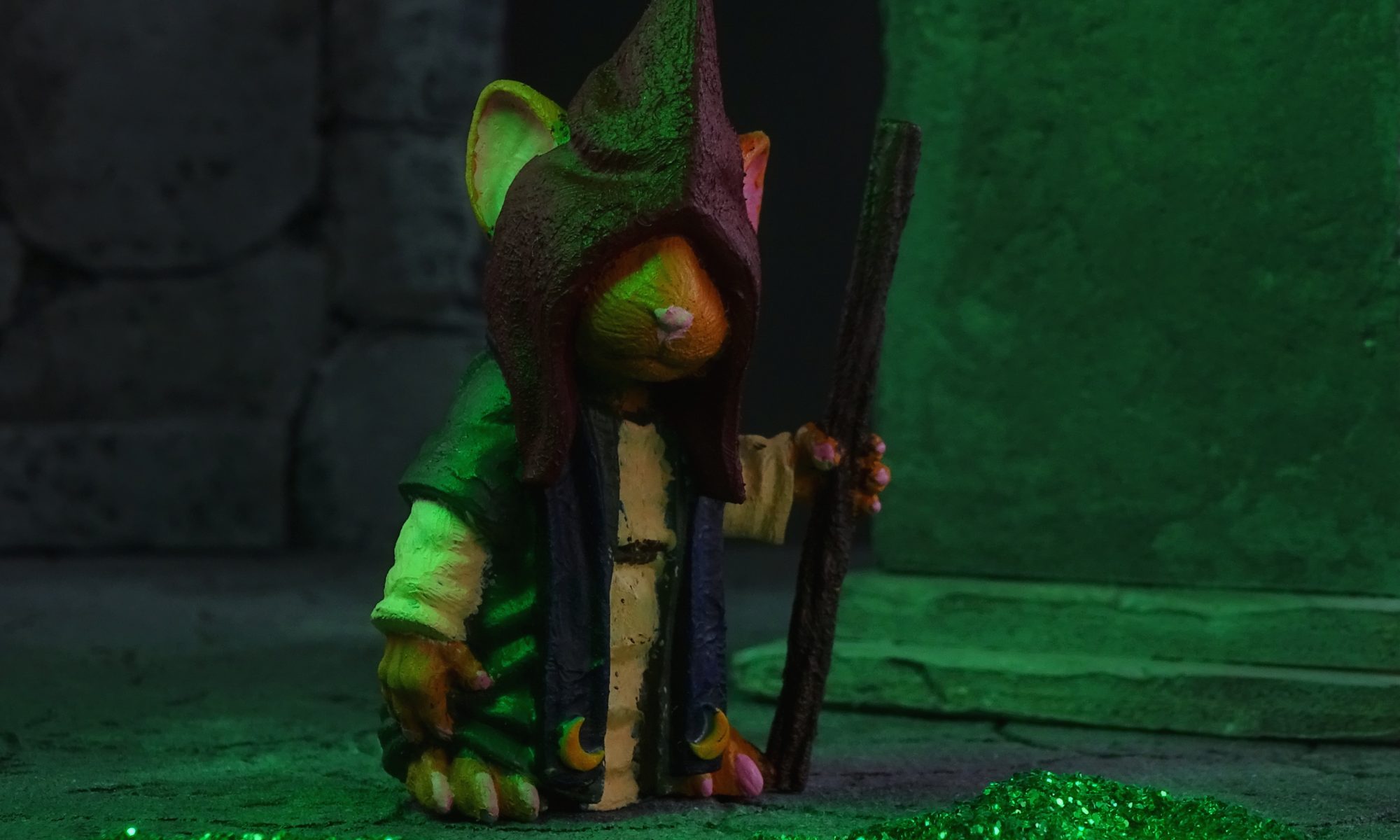 Once upon a time in a land far away lived Haggis… Haggis was born to a wealthy family in Fife, Haggis eschewed his family fortune to travel the world instead, helping where he can. He’s truly happiest with the sun on his face and wind at his back.

The Glittar, a magical powder from the ancient times…

What a strange trail of Glittar. Is it evidence of the disappearance of Haggis the Wanderer?
Rahts-Putin, on his way to the chapel, stumbled upon those traces of lost magic powers and there was a sound of merry melody playing in the air. Rahts-Putin started following them and waited for the bus. Why walk when you can take the bus…

One day while out practicing Lacerta the Archer was practicing his archery skills in the woods. Lacerta could hear a melody and followed the sound while stumbling across a magical glowing dust on the forest floor and a tree frog. Could this be a link to Haggis’ missing magical power? He decided that today was a good day for an adventure and headed out to follow the trail.

Zorbek is cursed to lead a life of persistent frigidity. A slave to the warmth, Zorbek never stops seeking the legendary fire being who would set him free! Perhaps he knows where Haggis is? Lacerta asks him and tries to help set him free from the fire to continue the journey to find their friend.

While Glittar was on his foray, he stopped at a castle. As he is the master of observation, he noticed a strange glow on the wall. He looked closely and spoke a magic spell. A message appeared on the wall. A good friend had disappeared and the message did show him where to go.

The message of Glittar about Haggis was sent to Purpura. She is living in her Glitter cave and Purpura also wants to help Haggis. Purpura is the star in making smoke bombs with spells. She is a good person but helps all kinds of creatures and she doesn’t care if they are good or bad!! It’s like Yin and Yang. She really wants to help to give Haggis his sparkle back because he is a good friend! Purple is the best spell. Crossing our fingers it all goes well!

While ambling along, Barry came across what looked like a trail laid down by a previous individual. Barry did not like Glittar, colour or sparkles so in true Barry style he decided to blow up this sparkle trail. But in true Barry style, there was a big bang, smoke, and not much else. “Why is Glittar so indestructible?!” thought Barry as he lit another grenade…

One of Yrsa The Cute’s secret missions was to help save Haggis’ magic, so she followed a trail of Glittar to a giantess. She had Glittar in her hair so she must know something! Turns out, that was her own magic and she knows nothing about Haggis and never met him.

Spelk was poisoned after picking up sticks in the forest as a young girl. As her features changed, her beautiful soul remained the same. But because she looked different, she was forced to live in the shadows and help ward off the evil spirits by spreading magic glitter everywhere she walked. News had arrived that her old friend Haggis was missing so she decided to help find him. She had to go back into the forest as that was his last sighting, there was a glitter trail that she had not seen before. As she walked through, she saw the rain appear landing onto the Knight of the golden glue.

Marc, also called the Knight of the Golden Glue, is a bit clumsy. His sword is glued together, as he has the skill to drop it and break it. He has a limp on his right foot, as his foot has a tendency to get stuck in the strangest places.
He also has a thing for golden glitter, so he follows that whenever he sees it.

Marc the Knight of the Golden Glue turned into a skeleton and joined Skulor over the Dark Side.

Skulor wanted to help everyone to find Haggis, no matter what his parents would say about it (kindness is not good, you have to show people your power, stuff like this). So he follows the glitter trail and helps Heigg the Odd to create a magical portal. He didn’t notice that he has turned into a skeleton.

They spent some time telling jokes, as Heigg wouldn’t hit them with his sword, for they were way too cute.

Skoria the Scorcher was looking for ice cream, hoping he could finally taste some without melting it at the contact of his molten skin. While hunting for ice cream, he stumbled upon a trail of Glittar, hoping to find ice cream at the end. By the time he reached the end, the Glittar’s magic had turned the baby T-Rex guardians into adults.

As the music got louder, Haggis appeared as he had followed the Glittar trail behind everyone else. He was wondering what all of the heroes were doing. He wasn’t really lost after all…

Two weeks ago I asked you great folks very last minute if you had any questions for us here in the collective (read Mike, Vesa, Shelly, Boris and yours truly) and yes, I know I asked it just a few hours before the actual hangout. END_OF_DOCUMENT_TOKEN_TO_BE_REPLACED

Every fortnight our little creative collective comes together for a one hour hangout where we discuss all things plastic. From top secret projects on how to conquer the world over more mundane topics like our next exhibition in London, Paris or Tokyo to the day to day business of who will be posting what this week. END_OF_DOCUMENT_TOKEN_TO_BE_REPLACED