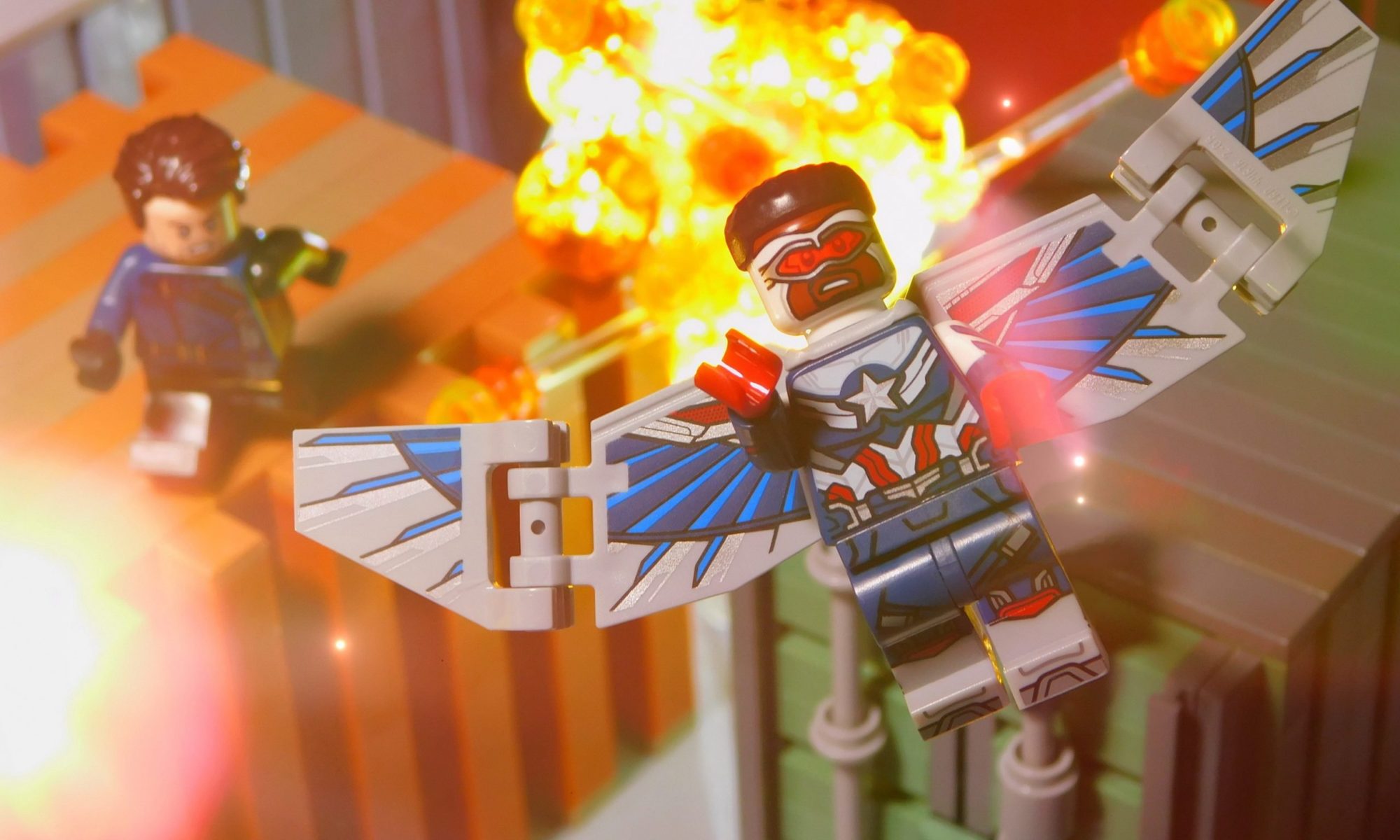 We continue our creative reviews of the blue carpet series, and this week Ann takes us straight back into the action-packed docks of Madripoor.

First Day at the Job

Sam Wilson’s first day in his role as a new Captain America was packed with unexpected events. While checking out the old strategic points of the defeated enemies with Bucky Barnes. our heroes detected some shadowy signal from Madripoor. It couldn’t be given by a friend, there was no doubt about it…

Intrigued, Sam and Bucky traveled to the dark archipelago again.

The strange signal leads them to the docks. The docks, where a week earlier the criminal scientist was recreating the Super Soldier Serum. Then his secret lab blew up and was destroyed by fire.

However, something appeared now…

Sam’s drone Redwing revealed somebody’s hiding place in one of the garages.

The buddies entered the garage and realized they had déjà vu.

Bucky:  Every time we fight, it’s one of the Big Three…

Sam:     Androids, aliens, and wizards? Now you are talking!

Bucky:  … but we’ve never fought the ghosts! Zemo killed this guy, didn’t he?

The same music from the gramophone – echoes from the past…
The mysterious shadows from the protective suits looked too realistic.
The old memories gave a real sense of presence… the presence of who?

And they saw him.

If it isn’t Doctor Wilfred Nagel himself!

Bucky: You! I knew Zemo had shot at random.

Dr Nagel: It’s about high survivability, not shooting. So, you didn’t think I would protect my own life with my greatest creation, did you?

The scientist turned his sly face toward Sam: Accept my respect, Captain America. Had you been less useful to my boss Power Broker, this experiment would have failed.

This time Nagel was provided with perfect security, that’s why the meeting wasn’t too long. Sam and Bucky escaped, preferring a well-thought-out plan to another explosion.

Sometime later, Sam was lost in thought about his defeat of the Flag Smashers: “We must do better. Because if we don’t, the next Karli will, and she’ll be even worse”

But Sam didn’t know the new ‘Karli’ was already here and he let her return to the Senate! Because he trusted Sharon.

Did the trust make him strong or weak?

With new wings and new dangers, Captain America will learn to understand himself better.

A quick behind the scene.

Ann takes us back to the original series and shows us the details she recreated in her LEGO sets and the eye for detail is, well, amazing.

I’m very honoured and grateful for this amazing opportunity. This project gave me so much positive emotions. Fantastic fest of collective fun and storytelling.

Thank you very much !