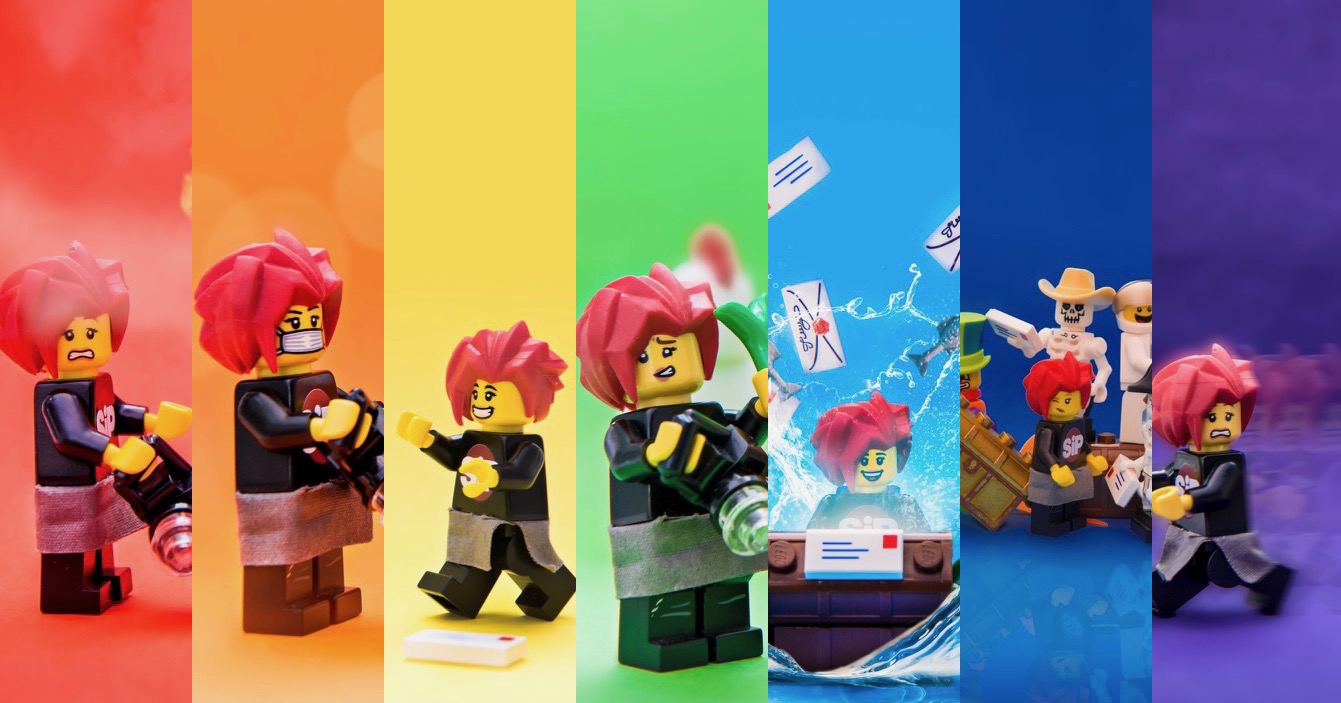 This week you may have all been wondering about the story behind @bevvypix’s latest series of images? Well today she reveals the story so far regarding #wheresbevvyspackage.

From time to time, we at Stuck in Plastic receive packages from our good friends over at The LEGO Group. We are fortunate to have this opportunity to build and review the products inside these packages, which are then written about in our blog and shared on social media. You can check out so many different reviews written by our wonderful team. And if you are specifically looking for a particular product then you can just use our search tool here on the blog.

So why and what led me to create this series of images using colour idioms? Since attending the SiP goes Virtual Toy photo Safari I became influenced by the colour scheme portrayed in our images. I decided to look up colour idioms. Idioms are basically expressions. They are metaphorical in their meaning and should not be taken literally. For example, using phrases such as if a person is “green with envy” really does not mean that their bodies are green.

ROYGBIV is an acronym for the sequence of hues. This commonly describes making up a rainbow, and an easy way to remember the colour sequence. Historically, Newton chose to divide the visible spectrum into seven colours. Described, as a meteorological phenomenon, caused by reflection, refraction and dispersion of light in water. This combination results in a spectrum of light appearing in the sky.

Growing up in the 70’s, this song became what I would regard as a bit of an anthem that children learnt. Nowadays, these lyrics remain embedded in my head, I can sing a rainbow or now known as sing a rainbow.

However, I often wonder about these lyrics written by Arthur Hamilton. In particular, pink is not actually identified as a rainbow colour, nor does the order perceive an actual colour spectrum.

And so the story began, a little joke between us and the fact that I was missing some “important” parts required for our virtual safari story. Such as the all important brown chest. Yep a brown one! I had a golden chest, but in order for the story to flow between all participants, it was crucial that the BROWN chest appeared in all the images. Good job I can edit, simply because the correct colour chests arrived later on the Saturday.

So the story goes on …

#bevvypix is waiting for a package and some how @stuckinplastic MisFits wrong delivery from the virtual toy photo safari two weeks ago has made its way to Wales, mmm #wheresbevvyspackage

“I found Benny’s head attached to an elf of all things. Yep I was also missing a vintage spaceman too.” Awww Benny that’s an offside chest and a ‘Yellow Card’ for you coz it’s a fish not #wheresbevvyspackage #bevvypix thinks you’re funny. And the story goes on at Stuck in Plastic

#bevvypix is sure that foxy Roxy didn’t get the memo from stuck in plastic. I’m positive #wheresbevvyspackage shouldn’t be full of carrots. Nevermind, today we are Going Green.

“Purple Haze, all around”, and I don’t know if #wheresbevvyspackage has been intercepted by this clown. Now he thinks it’s funny to keep #bevvypix on the run while she waits for stuck in plastic to deliver that all important @lego chest/package.

As I had already shot these images before, I then decided on titles. I proceeded to post this image on the day it was due (hence the lyrics Sing a Rainbow). Then herrsm pointed out in a comment that the timing had ironically coincided with the passing of the great Jimi Hendrix 50 years ago on that day.

With all the control measures in place, #bevvypix will wear a mask but she’s not going over to wear the dark side mask, well not today. The Orange side is #wheresbevvyspackage will be delivered I’m sure. I think these two were trying to tempt me to accept the wrong package, and tell me that Orange was the new Black.

Then Out of the Blue, a notification that #wheresbevvyspackage has been scheduled and I wonder what is going to be inside? A spaceman perhaps or a stingray, some more fish or something to review???

But wait there more … Stuck in Plastic forever and the packages just keep coming. Be sure to check out our blogs and reviews. You may even want to join our various themes and this years Twenty Twenty’s movie theme.

Bevvy, this one is awesome!
I read it on the go the first time, and for some reason I was not logged in and decided to comment when I was home. And then, well, … things happened :)

I really like this color thing. I can see more coming in the future.

Thank you,I am glad you liked it. Inspired of course by our amazing team and Virtual Safari.