I was sent two sets, Brick-built Minions and their Lair 75551 and The Unstoppable Bike Chase 75549. To being honest, I am not a great Minion fan and really didn’t have a clue how I was going to photograph them. My eldest teenager started building them and I started thinking just what exactly to do with them. It took him a few hours to build and his initial reaction was that they are easy to build. After he completed both sets, I could see what I had to work with. That’s why I felt that I needed to try to give the shoot a Minion personality and use traditional colour backgrounds to compliment the vibrant yellow.

Brick-Built Minions and Their Lair. 75551

If you love Minions, then you will love these new Minion inspired LEGO sets. Kids can use the smaller figures and step inside this new building toy. First, they can build a brick-built version of Kevin and Stuart. Then you can turn both characters around to reveal a secret room, complete with individual accessories. And next, you can transform Kevin into Bob.

The decision to only include two builds may open LEGO up for scrutiny, especially as little Bob, Kevin, and Stuart minifigures have been included in the playset. Saying that, you could purchase another set, that way you will have enough left over to rebuild your very own cheeky Minion. (Now, is there a thought or would that be despicable of me to suggest this?)

Each Minion matches a different unique personality. First off, let’s start with Stuart. The small Stuart wears pyjamas and looks tired. I guess he needs a nap on his drop-down bed inside brick-built Stuart. The brick-built Stuart expression is different and his hands move, (a great addition btw). There is an interactive dial above the bed. Kids will love this, as it moves his eye. I do like the interactive playability of this model and the accessories included.

Kevin is the tallest and reaches a height of 15cms or 5.9inches. And again, his eyes move by turning the dial inside his invention room. Kids will enjoy using their imagination and helping Kevin build new inventions, of that I am sure. What I do like about these characters is that they are interactive and a great source for exploring what each character can do. The challenge is what to invent. The age of this toy ranges from 8+. Younger builders can get a sense of achievement if they are able to rebuild Kevin into Bob.

My youngest teenager set out to transform Kevin into Bob. The manual was easy to follow and it didn’t take him too long. He decided to build Bob from scratch and take Kevin completely apart. Because you dismantle one for the other, it is advisable to use a separate container to keep all the parts safe in between builds.

It’s a thumbs up from Bob. If I was to choose a favourite, then it would be Bob. Little Bob, practises kung fu and big Bob has all he needs. This play set is packed with his martial arts equipment. In keeping with tradition, the brick-built Bob wears typical Minion fashion, which I think was a good choice.

Aimed at 6+, young Minion fans will love this action-packed ride with LEGO Minion’s Unstoppable Bike Chase (75549) The chase is on! Kids can help Gru and the Minions protect the zodiac stone from the villains who want it back.

This rebuildable toy motorbike set features three figures: Gru, Bob and Stuart. Kids will love placing Gru on the motorbike. Bob and Stuart can sit up front or ride behind Gru. Bob can even enjoy a ride as he is dragged along on the rocket skates and Stuart can throw bananas.

Stuart wears his traditional blue dungarees and is wide awake, showing off his banana. Bob wears traditional Minion fashion and has ditched the kung fu attire. Whilst Gru wears a blue suit complemented by a scarf. The only thing with Gru is that his likeness does not feel as effective as the Minions’. He doesn’t have his iconic pointy nose. Saying that, it would be impractical if LEGO started adding noses.

After reviewing both sets, the Brick-Built Minions and their Lair and the Unstoppable Bike Chase, I really like them and I guess these cheeky Minions have won me over. Definitely worth purchasing for any Minions fan.

I think LEGO Minion sets are a great idea and a lovely learning model. They provide creative fun for children and encourage role-play. The only downside for me is that if you wanted to build all three models from the brick-built Minions and their Lair at the same time you would need to purchase an extra set. 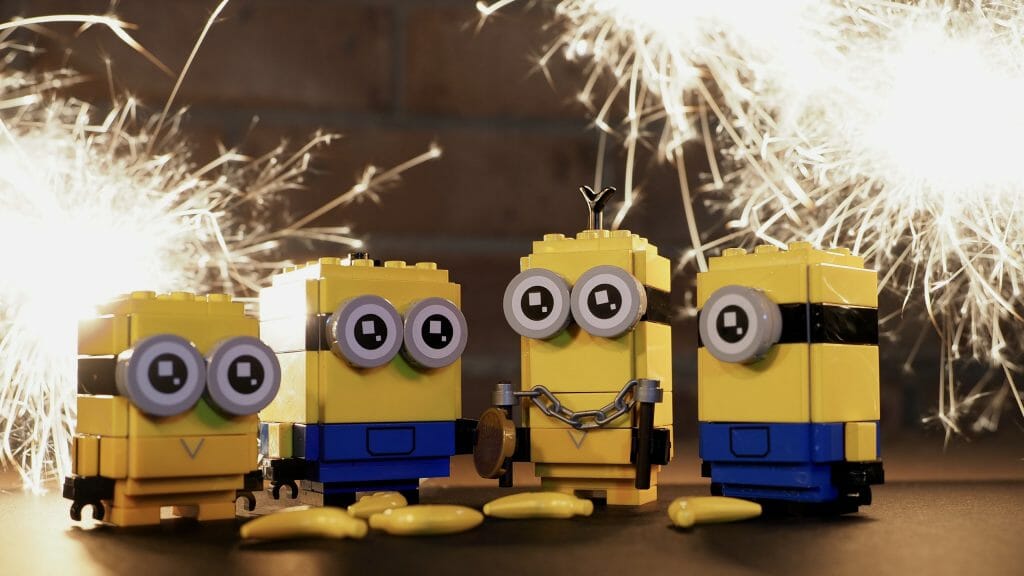 So nice to have a small and big version of the minions, with a “room” with matching accessories!
I can imagine how much this set can be fun for children

Haaaa! Since The day I saw the lair brick built set, I want it.

Great to see this theme in LEGO finally! My kids are pumped for the buildable Minions!