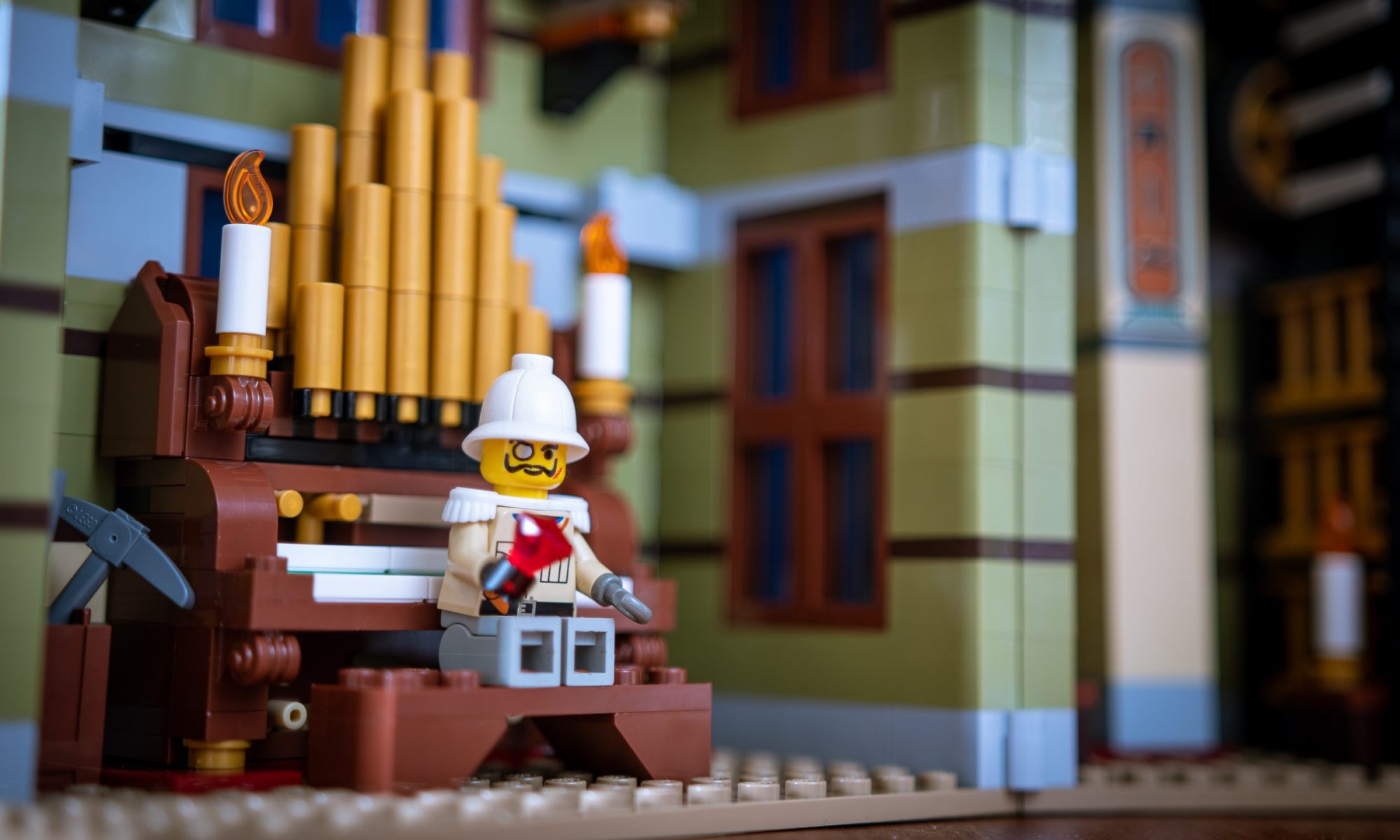 I’ve been lucky to spend the past weekend building, playing with, and photographing the new LEGO 18+ Creator Expert 1073 Haunted House.

A week ago, on Monday, I got a notification from LEGO that a mystery package was on its way. Back then, I had no idea what to expect. Stefan told me it could be the leaked set that was “everywhere” online. As I don’t really follow people sharing leaks, I didn’t know what it was. When I finally saw the photos, I had mixed feelings.

I knew at some point I would have to take photos of the next Fairground set for LEGO. Yet, I had no clue what it would be, and couldn’t really imagine what LEGO could come up after the Ferris Wheel, Carousel, and Roller Coaster.

Even though I’m currently busy taking photos for our friends at LEGO, I want to take a break to share my early thoughts on this set. As I’ve said, my initial reaction to the official pictures was rather mixed. But I also knew I just couldn’t really judge such a set based on images. Now that I’ve had time to build it, play with and look at it over multiple days, I think I can put words on the good, the bad… and the ugly.

The build and the set

The haunted house is supposed to be Baron Von Barron (AKA Lord Sam Sinister, LEGO Adventurers’ villain) haunted house… converted as a ride for an amusement park. I found it particularly easy to build considering it’s a large LEGO set targeting older LEGO fans. Yet, it was always fun to build and never boring or repetitive. (With the exception of putting together the 148 links making up the elevator’s chain.)

It’s also pretty tall and surpasses the Pirate Bay, being only a few centimeters smaller than the Disney Castle. There are some nice details outside and inside… And it can be opened like a dollhouse to access the interior details! (Something I was complaining about not that long ago.) And doesn’t include stickers!

Finally, the elevator is fun. One reason I wasn’t so excited when I saw pictures of the set, was the ride itself. From the video of the designers, the elevator mechanism didn’t feel as impressive as the previous Fairground sets. After building it, I have changed my mind.

Back in 1998, 8-year old me was going through a period where I was obsessed with Greek and Egyptian mythology and wanted to become an archeologist. It’s also at that time that LEGO released the Adventurers theme. Still to this day, it’s my favorite classic theme. It’s finding Adventurers MOCs on Flickr that led me to discover toy/LEGO photography. So needless to say that the nostalgia filling this set resonates strongly with me.

I couldn’t resist reassembling my old crew of Adventurers Desert minifigs and (what’s left of) the sets from my childhood and keep the inspiration flowing.

Even after building it, there are a couple of things that prevent me from being crazy about this set.

I’m not a fan of the “swampy” green color used for the walls. While I guess it’s appropriate for the theme, I don’t like the color and keep wondering how it would look like with dark brown, dark red or even dark blue bricks instead.

There is also something strange about the overall model that feels odd: its shape and aspect ratio. Because the tower needs to be high for the elevator mechanism to be interesting, the model is very tall compared to its base. This results in a strange effect where the model looks like it’s been compressed horizontally.

Even though the set can be opened to access the interior details, there isn’t a lot of space for minifigs. So the interest for photography might be relatively limited.

Finally, it contrasts a lot with the other sets in the Fairground series. It looks more like the kind of ride you would find at Disneyland than in a Fairground. That said there is also something good about this… I see an opportunity here to reboot the Fairground series in a LEGO theme-park series with each ride based on a different classic LEGO theme.

Maybe next we’ll get the Castle Carousel, the Time Twisters Wheel, and the Classic Space Coaster? (I am allowed to dream, right?)

While I can live with the above “bad” things, there is one thing that I truly don’t understand: the minifigures.

Yes… Just a week ago I was saying that minifigures aren’t the focus of Creator Expert set. But this one is a bit of an exception. (And after all, didn’t LEGO just decided to rename Creator Expert in 18+?)

I’m totally fine with the generic minifigures representing the visitors. But the set includes two ghosts and two identical minifigures wearing a suit and a top hat, who I guess are supposed to be the ride attendants.

For the two ride attendants, I wish there would be at least some differences between them. Maybe there’s a reason why they look the same, but I didn’t get it. Considering the theme of the house, I would have expected to have at least one of them disguised as Baron von Barron.

Instead, we get a weird mix between Baron von Barron (later renamed Lord Sam Sinister) and his acolyte Sam Sinister (AKA Slyboots).

The big deal is the ghosts though. They look like placeholder minifigures that someone would use in a LEGO Ideas project, not in a genuine LEGO set. Considering how much this set invests in nostalgia, why not reuse the mold from the 90s classic ghost that had been reused as a base for Ghost Vitruvius in the LEGO Movie? Or the more recent one introduced in Monster Fighters and reused for Scooby-Doo?

I have the feeling the idea was to make them look like people wearing a disguise rather than real ghosts… But that’s what’s great with the classic Castle ghosts: they kind of look like a child wearing a bedsheet.

My opinion about the set definitely improved after building it, and more importantly, after playing with it. That said it’s not the best set of the year, far from it. So far I’m pretty confident this title will go to the Barracuda Bay when it comes to the big sets. (There are a couple of smaller sets coming up this summer that I think could also win the title…)

But it will surely look great next to my Ferris Wheel and Carousel (and maybe eventually the Roller Coaster), alongside the Disney train and Disney Castle… Once I’ve transformed my city layout into an amusement park.

The Haunted House will be available from tomorrow in LEGO Stores and LEGO’s online shop. Do you plan on getting one soon? Let us know in the comments!

If I look at pictures of this house, I see your point about “been compressed horizontally” but on my side I see it as a very oooold city house, really thin, stucked into two bigger building.
I totally agree with you about ghosts minifigs, they look unfinished XD

No discussion but what an amazing review it’s definitely a buy for me cause the look I get your point with the figs they are reused. Still really love it and a wonderful review