Earlier this week, we shared the announcement of the new Jurassic Park: T-Rex Rampage set featuring a brick-built dinosaur. At the same time, our friends in Billund were sending us two copies as part of a toy photography collaboration. I received one on Friday. I binge-built it in order to enjoy the sunny weekend with Rex.

In this blog post, I want to share my first impressions about this set from the point of view of a Jurassic Park fan, LEGO enthusiast and, of course, toy photographer.

Despite being aware of an upcoming mystery Jurassic Park/World big set for a while, I only discovered its actual content when the press release was out. (I could have known a bit earlier, because Stefan and Julien saw it during the RLFM days, but decided to keep it a surprise.)

I was expecting a classic Jurassic Park set. Something like a big playset, similar to what LEGO did for Star Wars with the Ewok Village, Assault on Hoth and Betrayal at Cloudcity. A couple of dinos, the complete cast of the first movie, and buildings/scenery/vehicles. But I didn’t expect a giant brick-built T-Rex and gate.

At first, I had quite mixed feelings. On the positive side, the dinosaur looked good. The face seemed to have quite a lot of expression for a brick-built dino. But I had no idea how much motion Rex actually had as it is hard to judge from the few official pictures.

But I decided to wait (a bit impatiently) before judging. From experience, it’s hard to judge the potential of a LEGO construction based on a few still images. And sometimes, having the model in hands, or looking at it through a camera, can be a whole different experience than pictures or videos.

I built the gate on Friday evening, it took me a bit more than 4 hours with a break for dinner. I spent Saturday afternoon building the dino. 15 bags and probably around 8 hours in total. The instruction manuals start with the dino and then the gate. I decided to do it the other way to avoid procrastination. I knew that once I would have finished the dino, I wouldn’t care too much about the gate.

Overall I found building both the T-Rex and the gate enjoyable, varied and including cool SNOT building techniques. They’re both very well engineered to be sturdy and stable. The build also contains one of the most hilarious Easter egg left by the designer I’ve ever seen.

Rex looks great and has plenty of motion. The arms have great posability as they are made of multiple ball joints. The legs can be rotated, and very slightly angled. However, the main purpose of the leg movement is to angle the body. Don’t expect much of a walking pose as the knees can’t be angled. It might be possible to get one, but Rex needs some help to stand up as she’s too heavy to stand on one leg.

The tail uses multiple ball joints that allow to move it, a bit like a snake toy from the 80s. However, most segments of the tail are attached with more than one ball joints, probably to add friction so the tail stays in place. This prevents it from moving vertically.

Finally, the head, neck, and jaw can be moved. The base of the neck can be angled up and down. The head is attached to the neck with a big ball joint, but it doesn’t have enough friction to stay angled up. The eyes are made of what appears to be a new printed tile which really adds to the expressiveness of Rex’s face.

Overall, Rex has plenty of movement but it’s not perfect. Also, I can’t stress how this set is a display set, not a playset. Just playing with Rex at home, there were often parts falling off from me not being gentle enough with the joints. This is even more of a problem for outdoor photography. During my first photo session, I almost lost bits from Rex’s foot that fell off in the forest while I was trying to get a walking pose.

In addition, while Rex is very well balanced on flat surface, it’s sometimes a bit of a problem outdoors when the ground isn’t even and slightly inclined.

On a more positive note, with the body, head, legs, and tail attached with ball joints, it is fairly easy to detach them. So Rex can be transported quite easily in a box to go play outside.

From the front, the gate looks great and is really sturdy. However, it’s big and can’t be disassembled easily for transport like Rex or the Disney castle. I initially planned to take the gate outside for my first photo session, but I had to change plan as the lake where I go in the winter is currently infested with mosquitos. (And the gate won’t fit on my bike to go further away, where mosquitos aren’t much of a problem.)

The back of the gate also features small vignettes depicting iconic scenes from the movie. Some of them are really well detailed and fun to build, but they are really crammed into the gate. There’s little space for a camera or light without disassembling everything.

I’m pleased to see the Toys R Us exclusive minifigure of Ian Malcolm is part of the set. I’m also pleased with the other new minifigures, but the one I’m really happy with is John Hammond. Every time I look at him, I hear him say “I spared no expensive” or “Welcome to Jurassic Park!”.

On the other hand, I don’t understand why not all characters are included. I can forgive the missing Tim and Lex which can be found in the JP Velociraptor Chase. But I really wish Donald Gennaro and Robert Muldoon had been included. It’s possible LEGO didn’t include them because they intend to release later sets with them. (But maybe not…) Still, it’s pretty disappointing in such a big set to not find the entire cast.

Apparently, this set has received quite negative comments from the AFOL community. As a Jurassic Park fan, I can understand the disappointment. I wish all characters would have been included and finally get a LEGO version of the Jurassic Park tour car. As a toy photographer, I would have preferred a playset, rather than something that’s aimed at being on display. (Particularly when I’m currently lacking space for displaying large sets.) I would have preferred to get minifig-scale dinosaurs, and previously unseen ones like a Brachiosaurus.

Another critique I’ve seen reading comments online is that the set is expensive. One I disagree with. Maybe if you only care about the minifigs it is. But comparing it with other large licensed sets, I think it’s not outrageously expensive. At 250€\$ for over 3000 pieces, it seems like a pretty good value. In comparison, the Star Wars Y-Wing and Tantine IV are 200€ for less than 2000 pieces and don’t include more minifigures. Betrayal at Cloud City is below 3000 pieces and cost 350€. And even Apocalypsburg cost 300€ for a mere 58 pieces more.

But as a LEGO fan, I have to admit the brick-built Rex is epic. The engineering behind it is pretty amazing despite a couple of points that could be improved. As a dinosaur fan, if I hadn’t had the opportunity of this LEGO collaboration, it would have been hard to resist not ordering it day one. 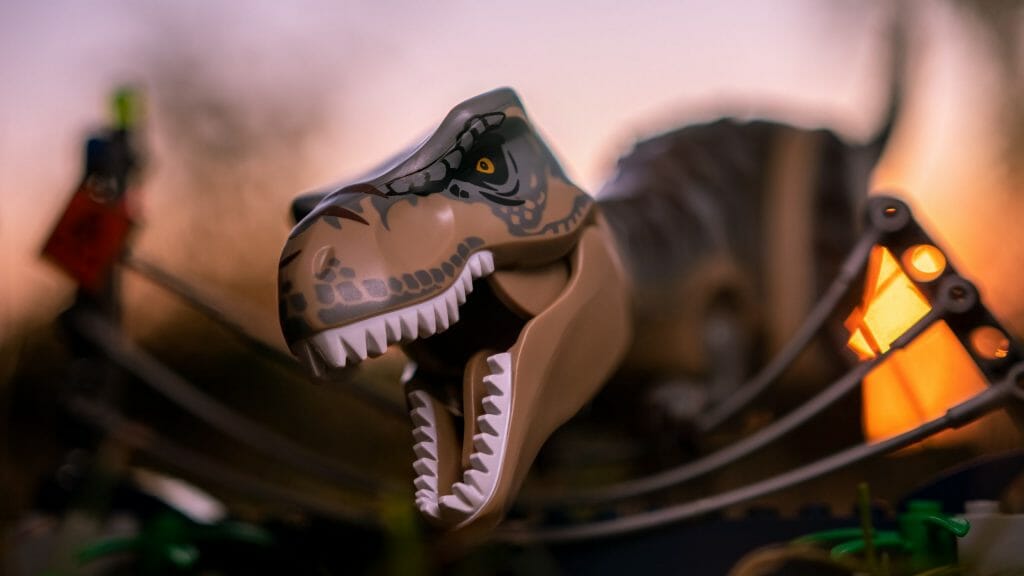