I’m not into cars.
For me, a car is mainly a utility object and not something I find particularly interesting to look at. If there’s one type of car I still find remotely beautiful, it’s the old and classic ones though.

So, when we got the assignment from LEGO to photograph the Creator Expert cars, I wasn’t too thrilled. The only Creator cars I didn’t own were the ones I found the least interesting. And those that fit the least in the Finnish Wilderness. Like the Aston Martin.
Nevertheless, I decided to finally build my VW Camper Van (which I bought more than 2 years ago…) and join the project.

Photographing it was one of the most difficult photographic exercises I’ve ever done. Not only for me but for my subject too.

Here are the (mis)adventures of my camper van…

Sunset at the lake

For my first session with the camper, I went to the lake near where I live.
It felt like an easy photo session.  Just a very short walk from home. Nice sunny sunset, and no wind. Yet it ended up being quite a disaster.

I took the first photo with moss on the edge of the lake and then decided to move to another spot some 50cm away.
There’s a nice rock going down to the water. 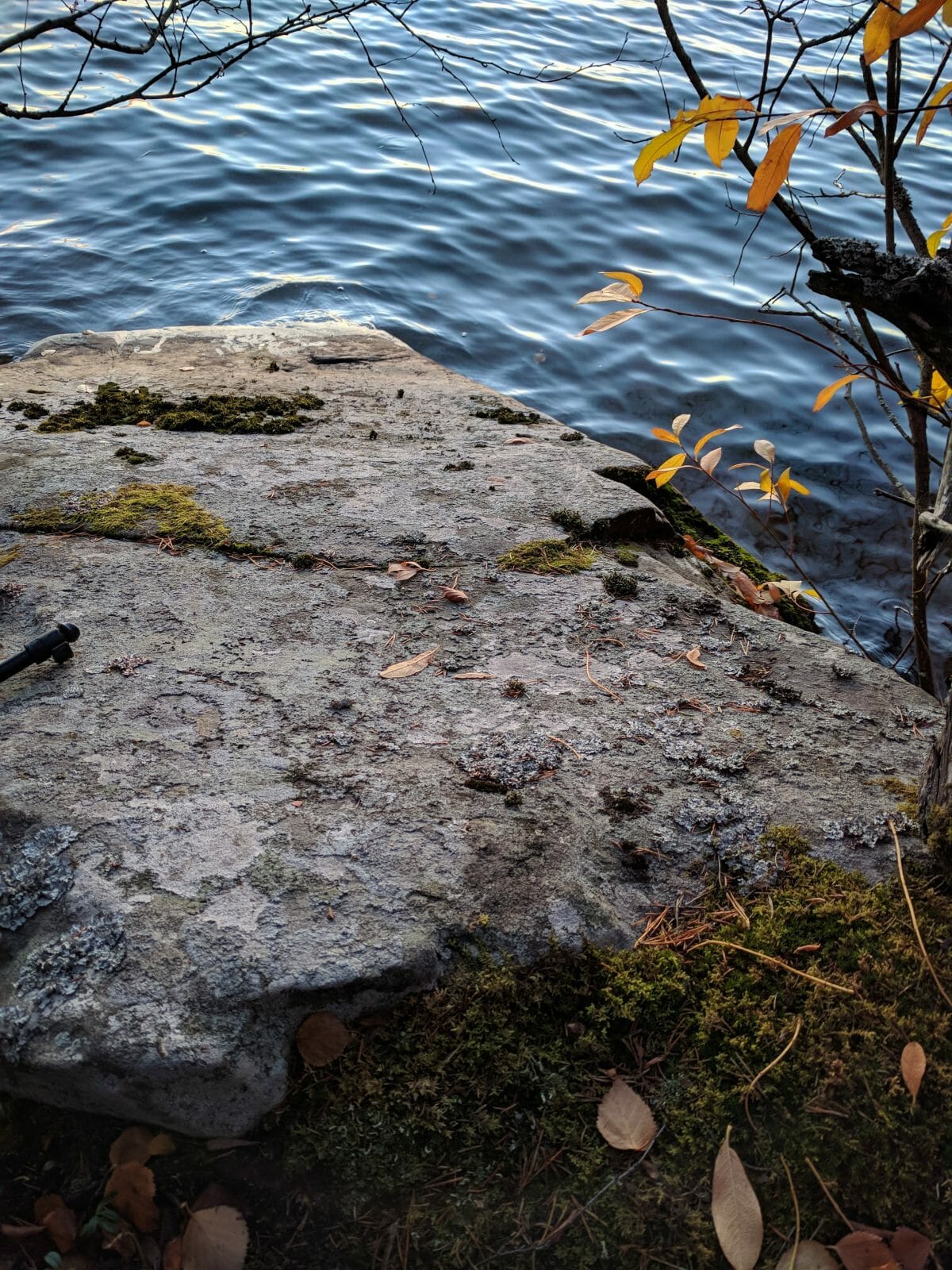 I thought it would be cool to have the car going up on the rock, but it felt dangerous too. Even with blue tac, I feared it would run down straight into the water. So instead I placed it partly between the top of the rock and the moss. (Bottom right corner of the photo above.)

Then I heard some noise.
I knew it could only be one thing.
The car went down into the water.
I turned back again and saw the car floating in the water.
The roof and a window were detached, floating a bit further away.

Adrenaline rush.
I didn’t think much and jumped on the rock.
I managed to get the body of the car, then the roof using my tripod leg as a fishing rod…

But the broken window was too far.

Then I started to think.
I hesitated too much.
Should I remove my shoes, take out my smartphone from my pocket and jump in the cold water?
It’s not really deep… but it’s cold.

Instead, I decided to wait for the window to come back closer to the shore… But at some point, I lost it. I guess it sunk into the lake.

Aurora at the lake

Although I got a photo before the car went down into the water, it felt like a big fail. I missed the best of sunset and my car was missing a window. But the project was still going strong.

After dinner, I decided to go to the other side of the lake to enjoy the Northern Lights. With amazing weather and space forecast, there were good chances that the light show would be amazing. 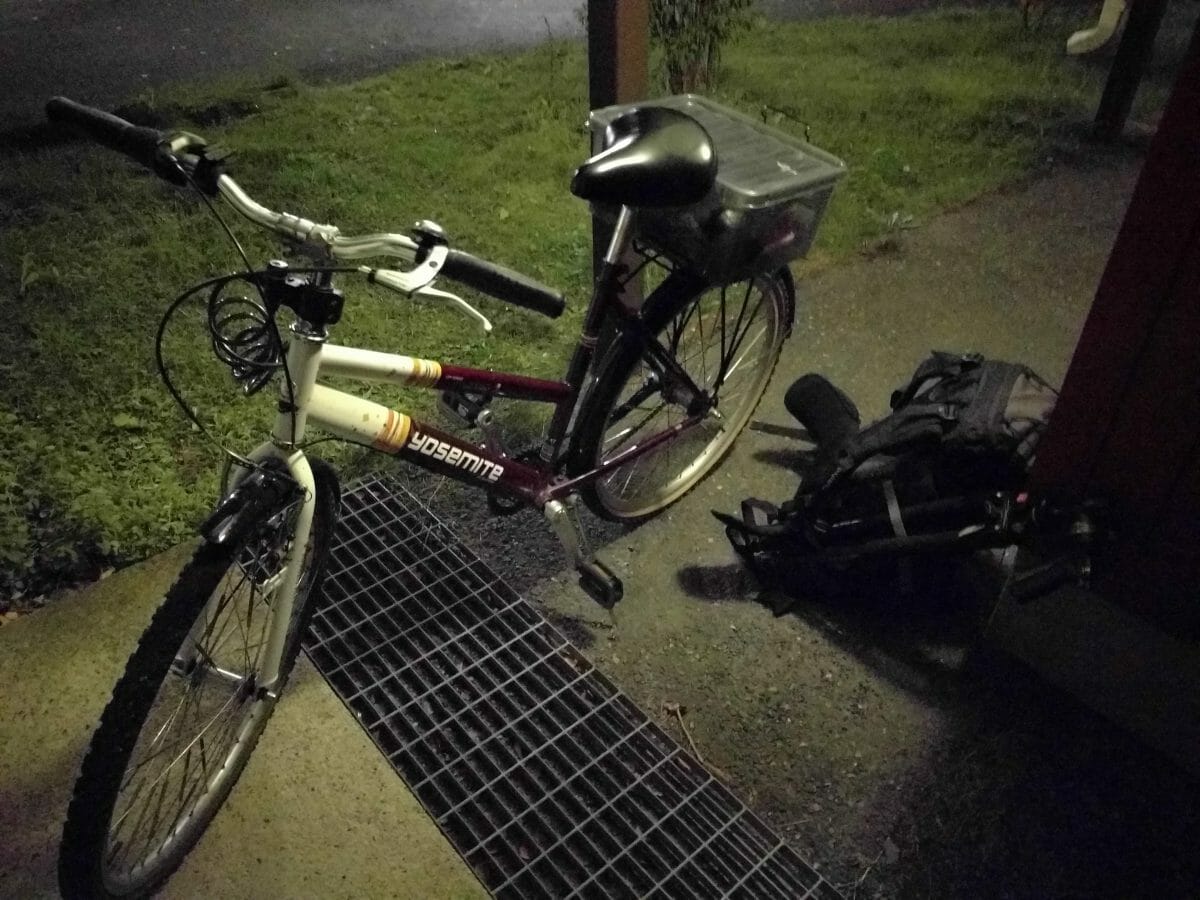 I arrived at the beach on the other side of the lake by bike (with a backpack way too heavy for biking). It didn’t take long before the green and purple lights start dancing above my head. I set up my tripod and took a few pictures of the swirling lights.

Then, I started to set up the camper in front of the water.
But then, just as I was done, I heard my tripod falling in the water…
With my camera on top of it!

My thoughts weren’t good. “It’s over. I need to dry my camera. I hope it still works.”

I hesitated.
Should I go back home and give up?
Instead, I waited for a while for the camera to dry.
Then I managed to finish the evening with at least a decent photo of the camper in front of Lady Aurora.

That said, it wasn’t easy.
It was dark.
It was cold. (The temperature was slightly below 0°C).
The beach was crowded with loud Erasmus students, leaving me very little choice for a spot to take pictures.
And I was struggling with motivation after my camera fell in the water.

It might have been one of the most difficult photo session ever.
I wasn’t happy with most photos and only one made the cut.

Going to the Beach

A few days later, my local photo club was organizing a wilderness survival and photography workshop. It was a nice opportunity to spend the afternoon learning how to make a fire, talk with fellow photographers, grill sausages… And end the day taking sunset pictures at the beach.

The perfect opportunity to photograph my camper van. There’s only one problem. The beach is quite far from home, and I was going by bike again.

I was also a bit late, so I had to bike fast.

Once there, I finally had time to look at the car.
The front was completely broken.
There was no hope to repair it before going back home.
No picture for that day.

The evening was great.
Good company.
Awesome weather. (18°C in mid-October in Northern Finland is crazy!)
But no camper van photos.

I didn’t get photos at the beach. I didn’t get a photo of the car with an aurora that fully satisfied me. (I didn’t get any luck to see any strong aurora since then.)

But towards the end of October, temperatures went sufficiently down so that the water on the lakes finally froze. It was finally time to get some pictures. This time no need to go far with a bike.
No open water.
So no risk of breaking the camper van or losing some of its parts. 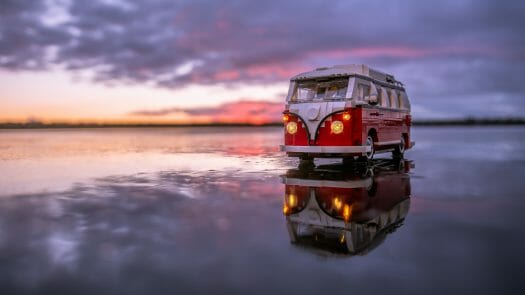 About Light my Bricks

We received lights from Light my Bricks.
It makes the car look very cool.
And I need to explore it a little further.

I see mostly two use cases for photography: studio photography and city night photography. Not really sure the Finnish nature is fit for purpose.

I tried to use them during both daytime and nighttime.
During the daytime, the lights are too weak for the strong light we have here. And for my photos taken at sunset or sunrise, I had to increase the exposure of the headlights because they looked very weak. 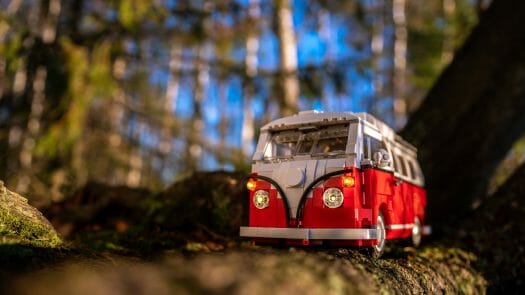 When I tried during nighttime, I got the opposite. The lights are very bright for complete darkness and the Light My Bricks kit does not come with a dimmer. 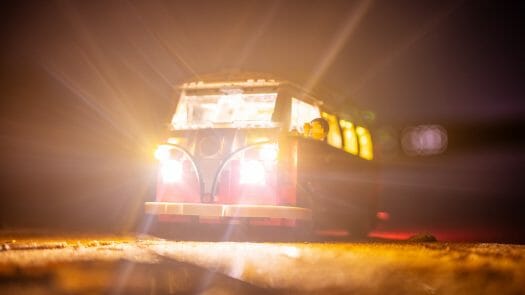 I can understand as it is meant to showcase the LEGO build inside the house. And I am sure it wouldn’t be a problem in a city with streetlights like Julien did in Paris. But without artificial streets lights, the out of the box lights are hard to control for the nature toy photographer who wants to capture the dark night together with the headlights of the camper.

For now, my VW Camper is nicely stored away…

I remember when it happened and you shared the details with us behind the scenes, but still reading this one feels “ouch”

Luckily there was no permanent damage to the camera. I am sure you can find a new window for the camper.

I fear I will be too lazy and will never get replacement pieces for the window :D

Oh god, I missed this one.   One of my friends had an issue  similar to yours: he was shooting his 60092 submarine set in a calm small water in countryside, the submarine standing on a little rock. And then, rain came. He ran to his car to store his camera, and came back to pick the submarine. Too late, it was already floating far away, out of reach. Not only a window here. Sometimes, I go to a barrage for shooting sessions, and it’ sur quite a fear to see minifig or camera falls into water or mud. I… Read more »

My lesson from this was that it’s not good to leave toys unattended, even for a few seconds :D

I shared a similar story on Brickcentral this week… I was shooting a wedding on an island. During cocktail hour my wife and i were doing ring shots near the shoreline. I had pick a location that was shallow and was bare rock… just in case it fell(it was a 2 carat ring). Low risk of losing it. So we set up her bouquet on a rock and set up the rings on the flowers. Everything is going well until my wife made a slight adjustment to the ring on a petal. As I’m looking at it through my camera… Read more »

Waauw. That is one amazing story.
Poor Moose.
And luckily the bride and groom were not around when you were shooting the ring shot.