According to Admiral Ackbar, the new Ninjago City set is a trap for AFOL. I’ve personally been hooked with Ninjago two years ago when LEGO released the Temple of Airjitzu as part of its big scheme to  make Ninjago appealing to adults. As soon as I saw the first official pictures of the Ninjago city, I knew I wouldn’t wait long before buying it. So do not expect this photographic review to be objective.

Master Yoda and Admiral Ackbar recently went on a trip to Ninjago City. They started their visit on the highest floor of the city, enjoying some good food at the local sushi bar.

Then they headed to the lower floors and went shopping. They particularly enjoyed Mother Doomsday’s comic books store and couldn’t resist spending their money on some ninja action figures. After shopping, they decided to spend some time outdoors. They went smelling the nice cherry trees which were all in blossom. 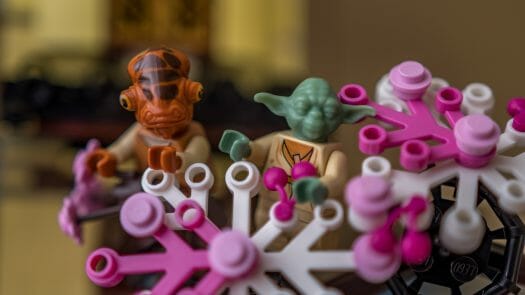 Before they knew it, the evening was there. They decided to stop to a nice crab restaurant.

Unfortunately, the chef was sick, so the Admiral decided to replace him. 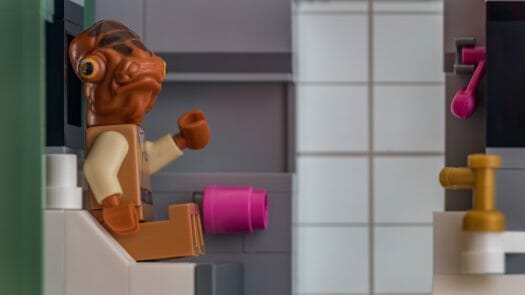 …Before going to bed.

Meanwhile, Master Yoda decided to visit his old friend Sensei Wu. They spent some time drinking tea while discussing how hard it was to handle young and stubborn pupils.

They finished the day on the lowest floor of the city, enjoying a nice ride on the canals. 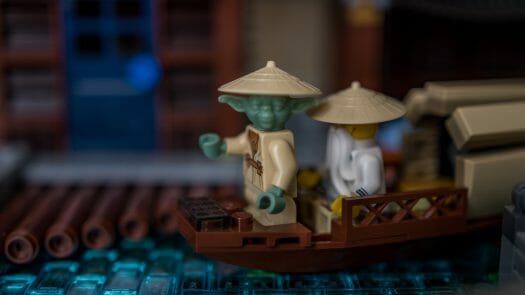 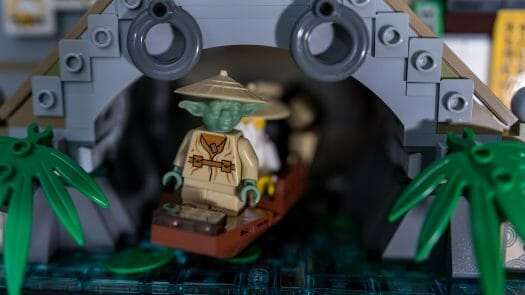 I initially didn’t want to talk too much about the set itself and focus on what I found inspiring. But I found this set so impressive that it is hard to resist. (That said, if you want a real full review I advise you to check the Brothers Brick, Brickset or JANGBRiCKS)

The Ninjago City is big, very big. The largest LEGO set I’ve built is the Simpsons house, but the Ninjago City is almost twice its size. It took me between 12 and 15 hours, spread over 5 evenings, 3 instruction manuals and more than 750 building steps, to complete it.

It’s been almost a year since I built a LEGO set of a significant size. Maybe it’s a consequence of going back to building with LEGO after a long time, but it felt like the Ninjago City is the set I’ve enjoyed building the most. Despite its large size, the set is never repetitive and you always do something completely different. I was also amazed by all the techniques and nice tricks used throughout the construction. As the poorly skilled builder I am, I learned a lot from it.

Integration with other LEGO sets

The result is very similar to a modular building. Each level is removable so you can access the interior, and the set can easily be connected to other Modular Buildings. Even though it seems easy to integrate the set in a layout of Modular Buildings, it will require some adjustments. First, the street level is a few plates highers than the streets of a Modular Building. Then there is a canal crossing the base plate. It’s also a rather tall set (probably a good 60cm high) and most modular buildings will look small in comparison. Finally, the Asian and slightly futuristic architectural style is very different than the more traditional Western style used for the Modular Buildings. Without any major customization, the contrast between the traditional Modular Buildings and the Ninjago City will be quite harsh.

Taking pictures of scenes in the Ninjago City is not always easy. First, it is very colorful, sometimes too colorful. Thus you will often find distracting elements in the background getting in your frame. Another difficulty is the narrowness of some interiors. In particular, the comic book store is very small and I gave up trying to take a picture inside.

Finally, this set suffers from the same problem as most Modular Buildings. Taking pictures of the interior requires unbuilding at least a wall. I’m still hoping someday LEGO will make a Modular Building that opens like a doll house. In that regard, the Simpsons House, the Kiwk-E-Mart and the Temple of Airjitzu were great as they require (almost) no unbuilding to take pictures inside.

A review wouldn’t be complete without talking about the minifigures. In the end, they are probably the elements the most important for us toy photographers. I won’t tell you about all the minifigures but only the ones that I find the most interesting.

As a LEGO enthusiast, I love this set. There is no doubt about that. However, as a toy photographer, I have a more mixed opinion. Although the outside is full of interesting details, the lack of uniformity really poses a challenge, particularly in terms of colors. Moreover, mixing the “City” with other official LEGO buildings is even more challenging and requires some serious customization. In the end, the parts of the Ninjago City that inspired me most for pictures are the interiors full of great details for storytelling. What’s probably the best about this set is that you don’t need to be a Ninjago fan to enjoy it. It’s a nice (slightly) futuristic Asian city that can fit the Adventures of almost any character.

It seems I’m not the only here at Stuck in Plastic who bought this set and you might hear about it again soon… I’m really curious what ideas or stories other photographers (from SiP or not…) will come up with. If you happen to get this set at some point and share photos online, you can tag them using our Ninjago hashtag #SiPGoneFishin.

I agree with you on the architectural clash between Ninjago City and other Modular buildings even though the new set has modular connectors. Although I haven’t bought the new set (not enough saved in the piggy bank yet), I’m building some MOCs in a seaside neighborhood on the edge of my city to fit in better with this unique Ninjago set, a hybrid of the Ninjago and the Modular themes.

My project for the winter is to build a city based on the large LEGO buildings I already have, but it’s definitely going to be a challenge to include the Ninjago City. I’m still not sure what will be the best (and easiest) solution: try to integrate it with the other buildings, or create a waterfront and place the Ninjago City alongside the Temple of Airjitzu on a separate island. The only thing I’m sure is that both will require a lot of work.

Awesome set. And some awesome adventures your Admiral must have had, Maelick. I am still exploring book one of this magic world, and I am not sure I will complete the build before we meet in Scotland, so my review will be after the movie hit the theatres I think :) That said, I did saw the connection pins in the Old World, and your visual images got me thinking about my own little city, as also the Old Fishing Store needs a separate connection, and connecting them with water may be a solution. I will have to do some… Read more »

It’s definitely a very long build. I also have in mind that one solution would be to integrate the Ninjago City as part of a waterfront. But even that will be a lot of work to cover at least one side of the big set. I’ve also been thinking about eventually buying (at least) a second Ninjago City but I’m not sure my wallet will be happy about it… :D

Great review! I’m still working on building my Ninjago City set, so I haven’t taken any photos yet but I enjoyed reading your review – especially the part about photographing the set. I love all the details they put into the set. I used to be hesitant about tearing apart my modulars for a photo but I’ve done it so many times now that I don’t think about it anymore. I love the colors in the set but I had the same thought that you did, which is that it might be difficult to photograph some of those colors but… Read more »

Thank you! It’s surely quite a challenge to photograph the set with all those flashy colors. The photo of Yoda and Ackbar getting out of the comic book store is a good example of that, and probably the photo I took I’m the least happy with. I had to crop it as a square picture because there were too many distracting elements. And afterwards, I’m thinking I should have got rid of those trans-green panels in front of the entrance of the store. Have fun building the set! I can’t wait to see what photos you will come up with… Read more »