Last month was the Paris Air Show.
You may have read my article on the subject. It was a great experience. I had so much fun taking pictures with LEGO minifigures in the middle of airplanes.

And because last month’s word was craftsmanship, I thought it would be a good idea to take one of those picture and describe the crafts I used to achieve the initial vision. Let me fly you through the whole process

When I thought of bringing Lego minifigures to the Paris Air Show, I had a couple ideas in mind that I was able to easily make such as the two astronauts walking towards the rockets or the boy with his paper airplane (which I crafted myself) or even the old pilot with the white scarf (that I made from a piece of an old white glove).

So, I thought of taking a picture using an actual LEGO airplane.
I own the big blue commercial airplane from the Lego set 60104 but this one is way too big. Recently, the LEGO Group released a small set about the new Wonder Woman movie. And when I looked at the set, I was not only attracted to the minifigures but also to the airplane. This was a really good size to have in a backpack, easy to carry, and very stylish.

I decided to bring that airplane to Le Bourget Airport to take a picture. I wanted this picture to be funny, so I went with the airplane in a dive (You could see the upper surface of the wings) with a terrified pilot on board. Initially, the propeller was supposed to have broken in flight but when I tested the picture with some friends, I understood that the story was not easy to read. So, I went with a simpler path that’s why the propeller is still attached.

Now to take the picture…

Since I needed to have the airplane in flight, I had to find a way to maintain it in the position I wanted. I usually use metallic wires but while it works fine for LEGO minifigures, this one was significantly heavier. So, I built a rig with LEGO minifigures legs and two chopsticks (This was my best idea at 11PM the day before the shoot…). It was not perfect, but It was good enough for me. When I do something like that (rigs or very particular set ups that I have in mind), I try to do some “proof of concept” pictures, to get a visual idea of the result.

Now was the D-day, at the Paris Air show. I had everything with me: my LEGO airplane, some minifigures and an assistant (in that case a colleague) to help me with the picture. I had the picture vision, but I did not have any particular idea for a background (maybe a view of the runway?). And while I was wandering the alleys of the show, I stopped in the middle of the main street because this was the perfect location (at least for me).

I asked my assistant to help with the picture.
It was not easy for him because I used some blu tack to help maintain the chopsticks inside the LEGO minifigure legs and with the heat of the day it melted.
But after several tries we had the picture I wanted (or at least the correct airplane position). I did some tries with the separated propeller, which needed me to have a second assistant (another colleague who passed by).

After taking the picture, now was the time to go on the computer. I take all my pictures in RAW format that allows me to have a certain degree of correcting afterwards. I usually don’t like spending too much time on a picture (because I am lazy).

So after selecting the “best” picture (I took over 85 pictures of this one scene), I applied some corrections on Lightroom (light, contrast, shadows,…).

I also took the same picture with different exposure levels. So, I made a HDR composite of the picture. This was the one I selected for the final picture.

The HDR (for High Dynamic Range) allows getting a larger range of luminosity by merging several pictures with different exposure levels.

In the end, the picture did not need that much corrections but the next step would be a big one. I needed to make the aircraft fly and not only being held by some chopsticks… 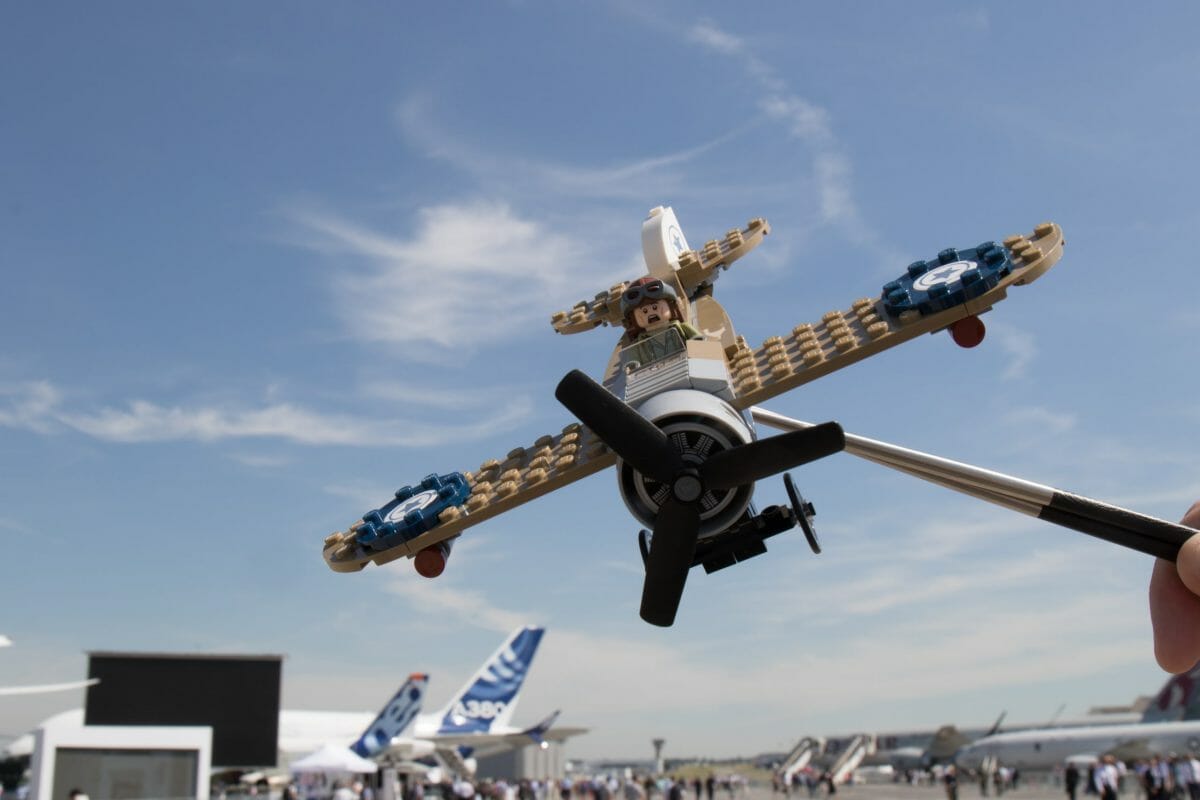 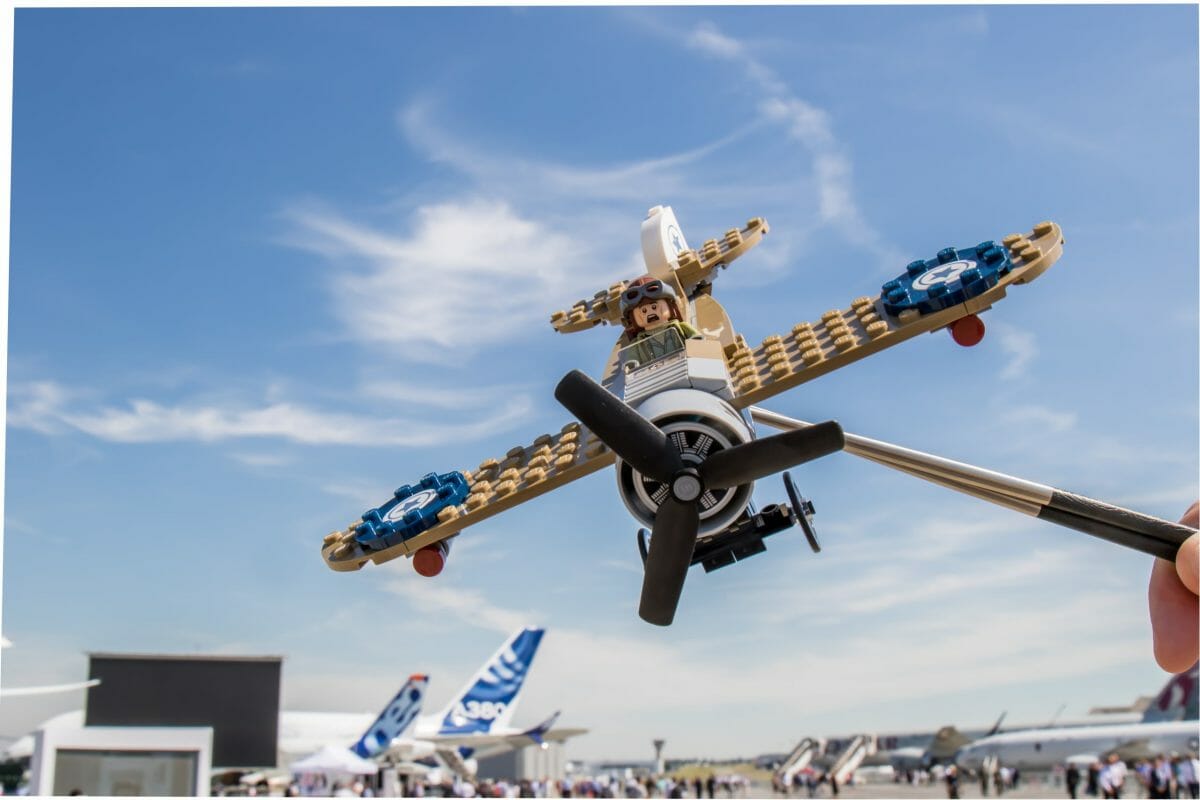 Straight off the camera vs after Lightroom editing

Usually when you want to make something disappear such as metallic wires or in my case chopsticks, you would take two pictures: one with the subject and one without the subject, to only get the background so you can have information to fill the empty space behind the subject.

Then you take an editing software such as Photoshop and open the two pictures in the same document. After aligning the two pictures (if needed, especially if, like me, you don’t use a tripod), you can use the eraser tool on your picture with the subject to reveal the background underneath.

That’s the theory. Except that in my case, I forgot to take that second picture…

In the rush of the moment, I forgot to ask my assistant to remove the airplane. Lucky for me, the chopsticks were on a blue background. There were some clouds, though, but it would not be too complicated to create “stuff”.

Photoshop offers some great ways to fill areas in order to mask unwanted objects. The algorithms try to estimate the background of the object. I find the result to be often “pretty good”.
In my case it worked well, except close to the wing or the fuselage where it needed more work. So, I used the clone stamp tool to duplicate parts of the sky to replace the chopsticks.

In the end, I used two tools: the content-aware tool and the clone stamp tool.

And here is the result. 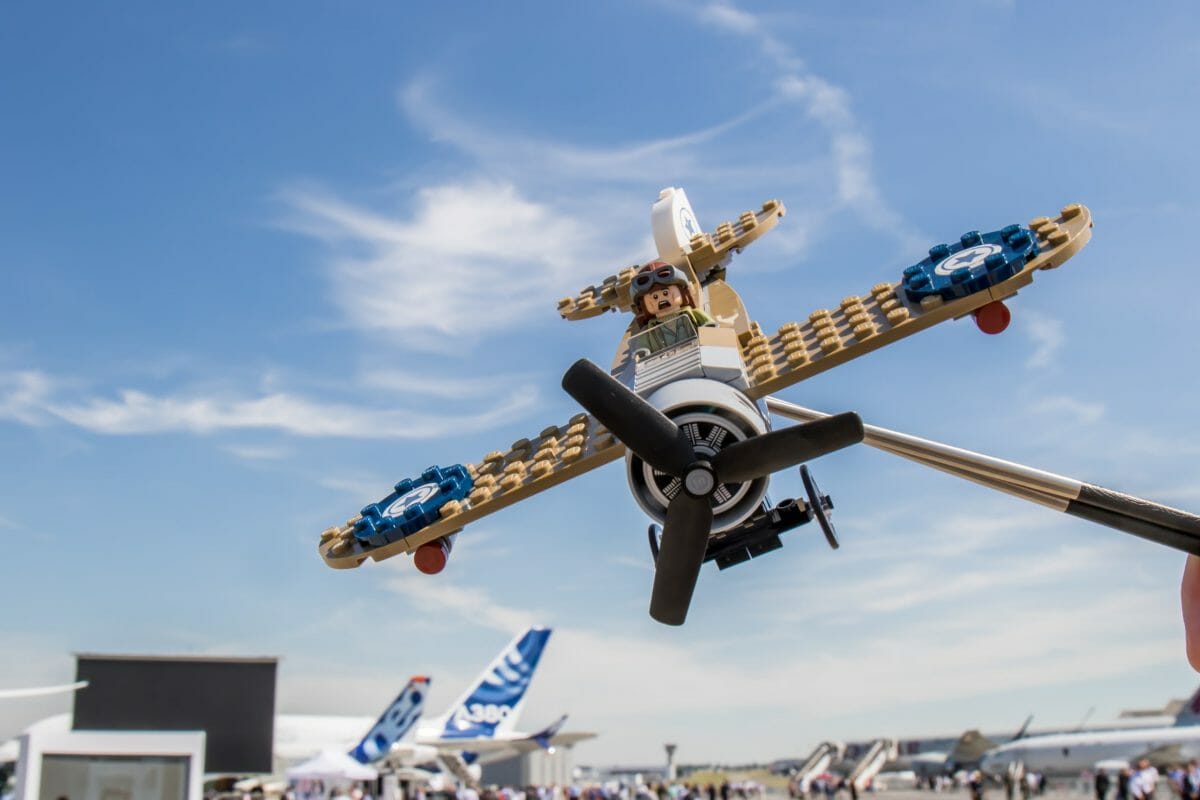 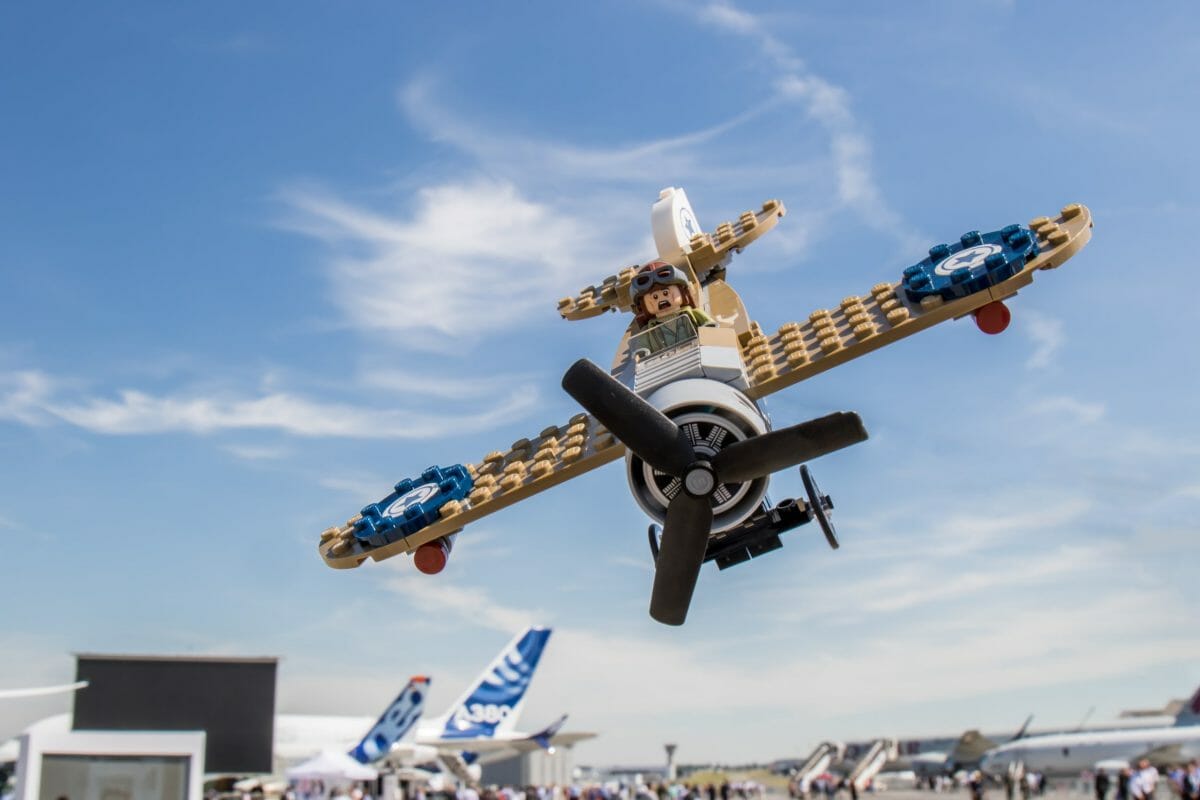 Before and after removing the chopsticks

I am really happy with the way the airplane looks like and how I was able to remove the support rig. But, I had some issues with the bottom part of the picture.

I don’t know if this feeling ever happened to you, but I was happy with the subject of this picture, but I preferred the background from another one. 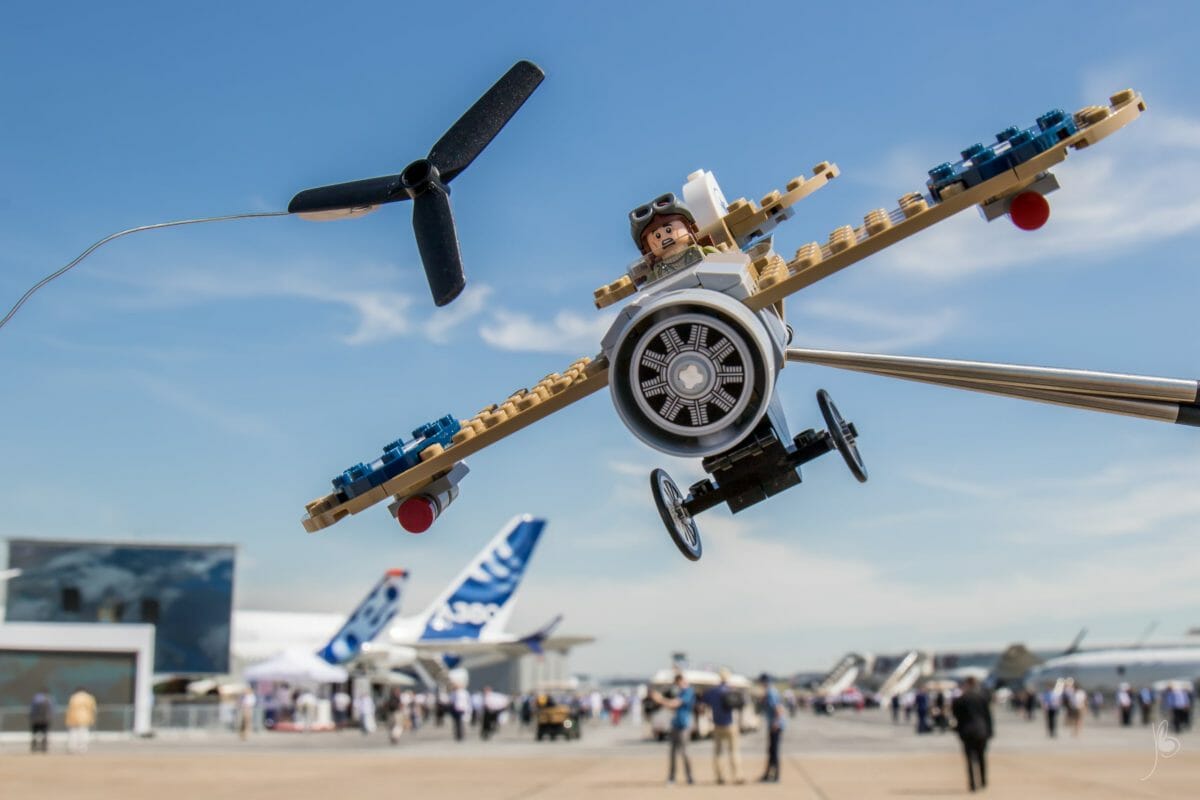 The solution is compositing and the tool to do that is once again Photoshop. It’s such a powerful software. And I only know how to use a portion of it. The visible part of the PS iceberg. But this time, the solution was not that clear to me. I had to think about it and try several times before finding the most elegant way to do that.

So, I copied the bottom part which I was interested with on my picture and I had to merge it. The solution I found to do that properly was with the use of masks. You can create a smooth transition at the edges of the bottom part to mix it with the initial sky. 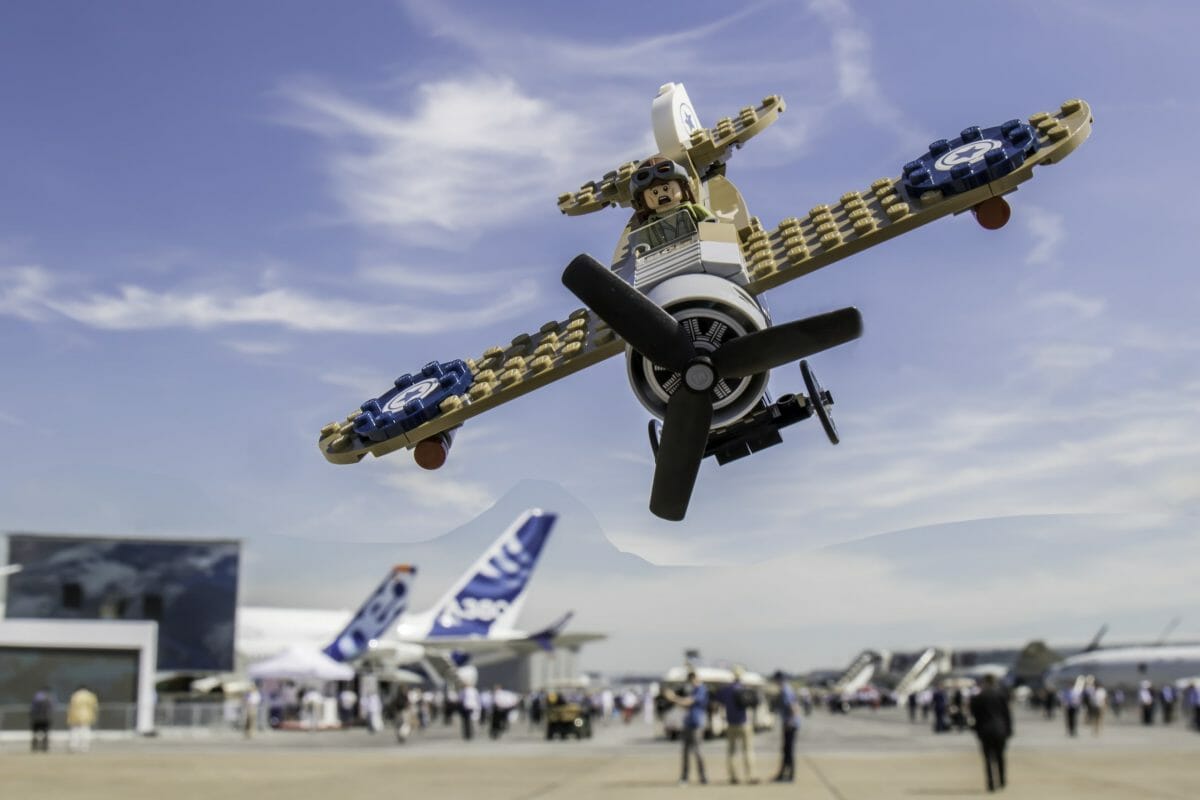 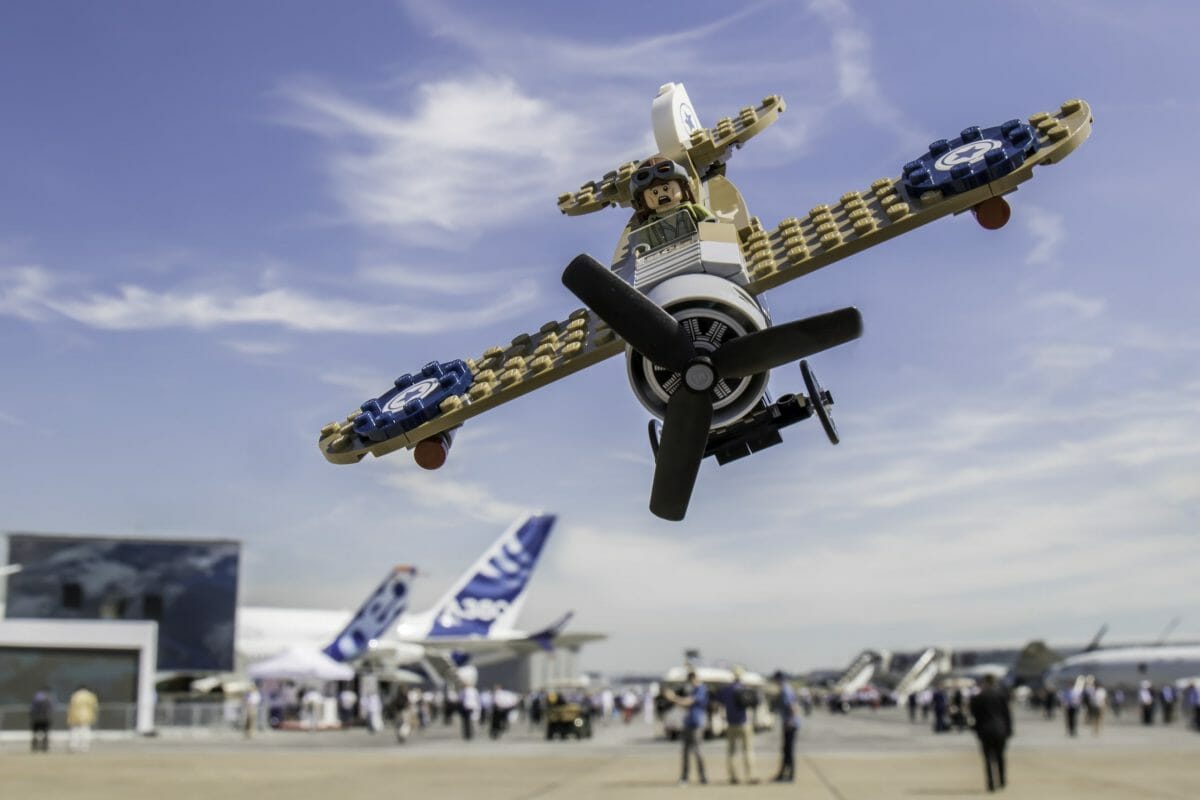 Getting a smoother transition

I don’t know if it’s the best way to do that, but I am pretty happy with the result.

Would you have noticed the picture compositing?

Finally, I have a picture I am happy with and my airplane is floating in the sky. But in my initial vision, the propeller was rotating since it is a working airplane.
Looking at propeller pictures, you can see that either you see a static propeller, because the shutter speed was really fast or, for a static airplane, you can get a darker disk instead of the propeller, because the shutter speed was much slower. In that case you don’t see a propeller at all.

I wanted to do a cartoonish version of that with a visible part of the propeller (because it was on the picture and I could not remove every bit of it) in the middle of a blurry disk.

Like I told you in the beginning, I started by doing a proof of concept (actually done before doing all the picture editing). I wanted to see if in half an hour I was able to find a way to do something reasonably interesting. This is what I came up with.

It was a good start but I had to improve it. So what did I do?

First, I selected the propeller using the pen tool (the best precision selection tool in my opinion). And copied it on another layer. I did a spin blur (10px) on this layer, to make like if the propeller was rotating.

In the end, I had a blurred propeller on a layer. Then, I repeated the process with a copy of the initial propeller at different levels of blurriness (20, 40, 60) and I overlaid them to each other. The result is a rotating propeller. 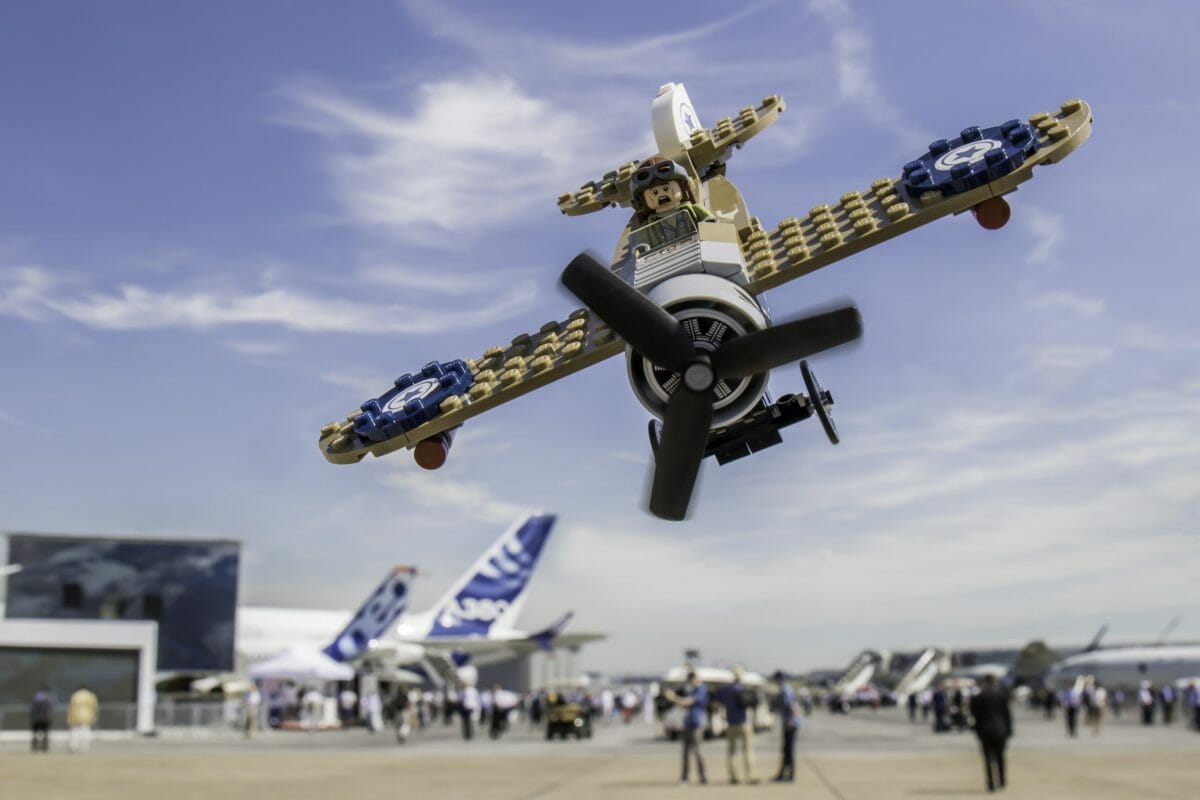 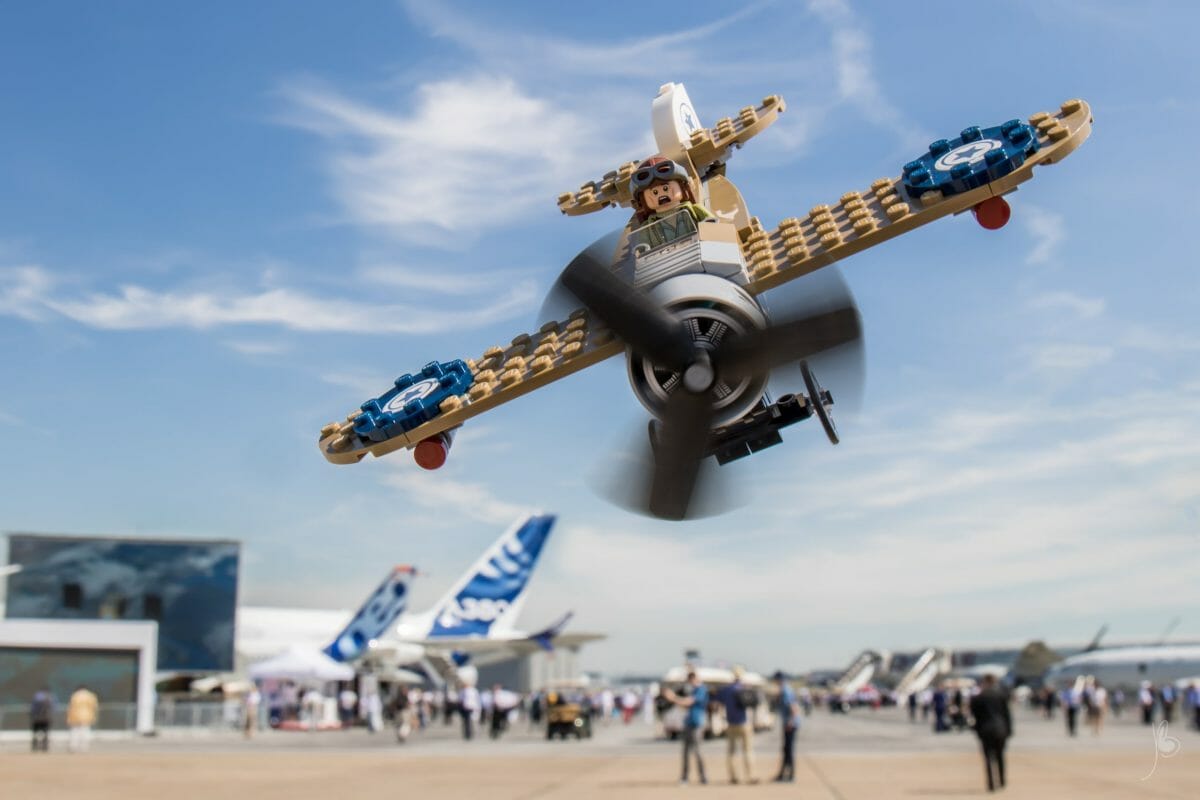 I had an idea and I crafted a picture. From the initial vision of the picture, I spent several tries and hours to get to a result I am really proud of.

In total, it took me something like 4-6 hours to deal with all the computer stuff. I did some stuff like picture compositing that I never did before and it was really interesting to try.

From the camera to the final picture

What about you? Do you have a particular picture which was complicated to make and you would like to talk about it?

Thank you very much. I am glad you liked the picture and article :-)

Awesome. I really like the creative approach from idea to the final composition. I must admit that the composition in the middle I did not see coming (very natural) and combining the best elements of a series is indeed a gem we sometimes forget.

And an assistant or two is always handy :)

Thank you Boris. It’s always great to have an assistant but I don’t often have that chance (and you have to take care of them because they can get bored pretty quickly while you are enjoying preparing for the next picture).

And it was also the first time trying picture compositing. I will probably use that or think about that more often.

I forget all the time to take a second photo of only the background, but hopefully Photoshop healing tool is so powerful that most of the time it’s actually not necessary :-)