Initially this blog post was intended to be a successful report about my approach to the topic of last month´s word, craftsmanship.

Many moons ago in an earlier life I used to be carpenter, so the idea of craft is nothing new to me. To master a craft one has to be curious; eager to learn new things; (sometimes) willing to release the inner child and let it push all the buttons there are just to see what happens. Easy as pie. Or at least that´s what it should be. Especially when you´re an AFOL playing  working with a toy that proverbially screams for being played and explored with and bending the rules (Rules? What rules?) : the LEGO brick.

So I thought about which artisanal skill, from all the photographic tools that I had heard of so far, I´d be interested in to explore to a level so it´d leave me a feeling of “Yup, that´s good!”. I remembered that on my mobile I used to have an app designed for taking long exposure photos. I had quite some fun experimenting with it for a while.

Now, the funny thing with apps on an iPhone is that it gives the user the idea he/she mastered a certain skill almost instantly. Same with me. But not with a DSLR. Soon I had to relearn the hard way that in order to master a certain skill you have to

a) learn about the theory of something (in this case e.g. that there is more than one factor involved in a long exposure photo) and

b) do it. And when you have: do it again. And again. Repeat it until you think that you´re happy with the result. Boris was absolutely right when he told us to discard the first and second photo. (Of course there is no must for the first rule  but it surely will help you speed up the process.)

Ok then, theory had been swot up (or so I thought), ideas had been gathered, toys had been packed and a location had been chosen. So off I went to master long exposure toyphotography. And I strictly followed the rules. Discarded the first pic. Deleted the second one. And from there on things went slightly different from what I had planned.

I messed up the third, too, but was unpatiently willing to reach my goal.

So I tried on.

And at some point ran out of batteries!

Fortunately Master Wu was with me and helped me summarize my experience to yet another lesson:

Do stay curious. Do let your inner child roam/jump/play around whenever you feel like. Don´t be afraid to try out new skills or crafts- the process of learning will never stop, no matter how old you´ll get. But most of all: Don´t be afraid to fail. Learn from your mistakes. Then get back on track, focus and shoot the picture you´re happy with.

I definitely set my mind on making  long exposure in toyphotography another tool of mine. Once I did I´ll share it on here with you. And I´ll hopefully get back to a more relaxed way of approaching new skills and techniques. After all we´re in it for the fun, aren´t we?

Have you tried your hands on long expos yet? Was it easy for you? How long did it take you? I´d love to read about it in the comments. 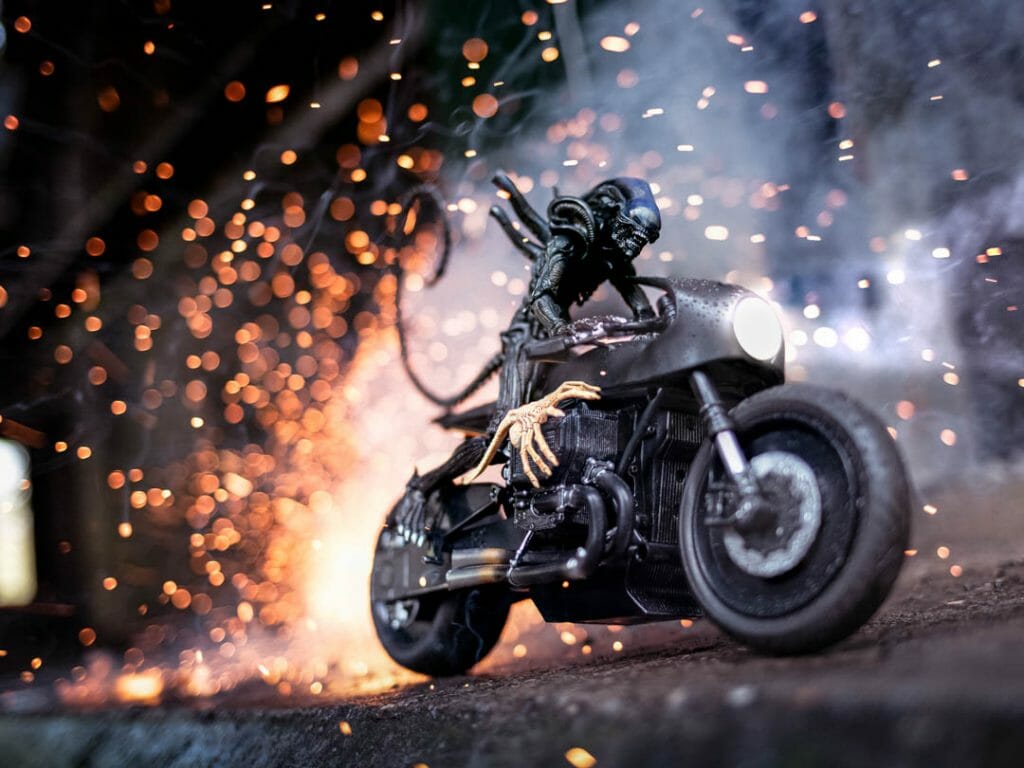 You know I was just thinking about giving long expos a try w/ some plastic models. Last week was the 4th of July (aka fireworks day here in the USA), so it was long-exposure landscapes all week; took the opportunity to get a couple shots w/ some smoke bombs & minifigs, but this definitely has me now wanting to do a bit more light painting as well :)

Cheers, Jake! What an awesome opportunity to take a dive into long exposure photography! I’ve seen your pics on IG and am definitely looking forward to seeing more. Happy snapping..

It seems our post have a smular topic in common :)

As they say: Great minds think alike *coughcough*.
Maybe your B/W was an easy escape, yet it’s a lovely one. Safe travels.

So I wonder… Which part of the process went wrong?

I tried to do long exposure pictures at the Paris Air Show to remove people in the background but I terribly failed at it too…
I forgot to set a 2 second timer to take my pictures (or use a remote control), so it immediately blurred because of my finger leaving the shutter button. I only noticed that when looking at the picture on my computer. It was unnoticeable on the screen of my camera.
And I am sure that with people walking in front of my camera, the ground shaked a bit which also blurred my picture.

There are indeed quite some things one has to think of ahead of shooting long expo. Guessing that’s what makes it so tempting