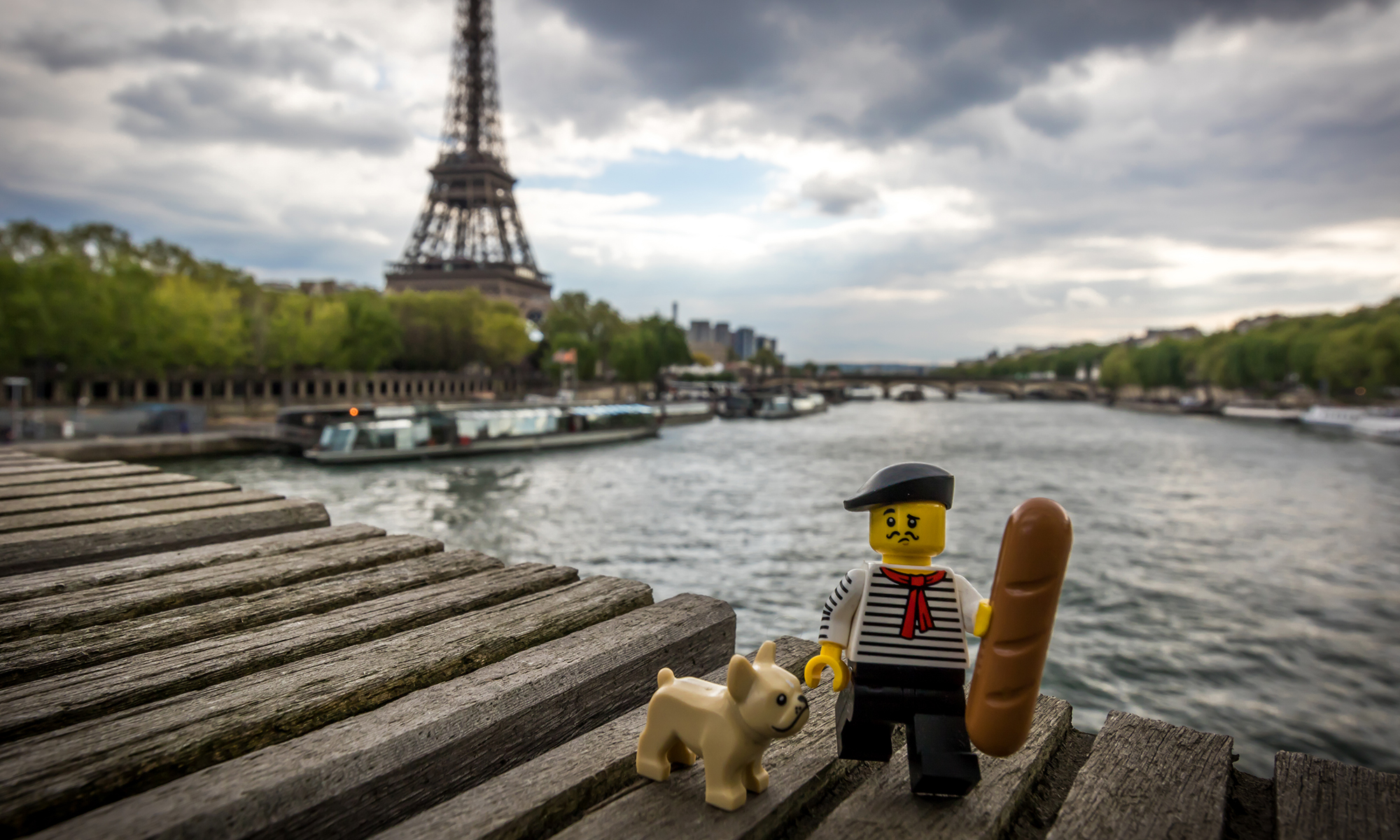 Marcel is a Parisian.

He is a lover of good food, good wine and good art. He is a connoisseur of some sort. And, being 4 brick tall, he likes to wander around his own city: Paris, the city of lights.

Always carrying a baguette, he walks around with his small dog, a French Bulldog (of course). He wears a marinière (a striped shirt), a beret on his head, and a small red scarf around his neck.

Marcel likes his city. He often starts his day at a café. His favourite one is “Le café des 2 moulins”. That’s where the movie Amélie (or Le Fabuleux destin d’Amélie Poulain, in French) was shot. A charming place.

After a coffee and a croissant, he stopped by a “boulangerie” (bakery) to buy a baguette for the day. Leaving Montmartre (that’s where he lives), he passed by the Moulin Rouge and jumped inside a “Metro” (the subway).

His walk around Paris brought him to the Pyramide du Louvre, the entrance to one of the most beautiful museum in the world, famous for “La Joconde”, Mona Lisa portrait by Leonardo Da Vinci.

From there, Marcel walked along the avenue des Champs-Elysées to stop at the Arc de Triomphe, a monument located in the middle of one of the busiest roundabout in Paris. He was almost run over by cyclist.

He then decided to go South to say hello to the Eiffel Tower, constructed for the 1889 World’s fair and which was supposed to be destroyed. It has now become the symbol of Paris. 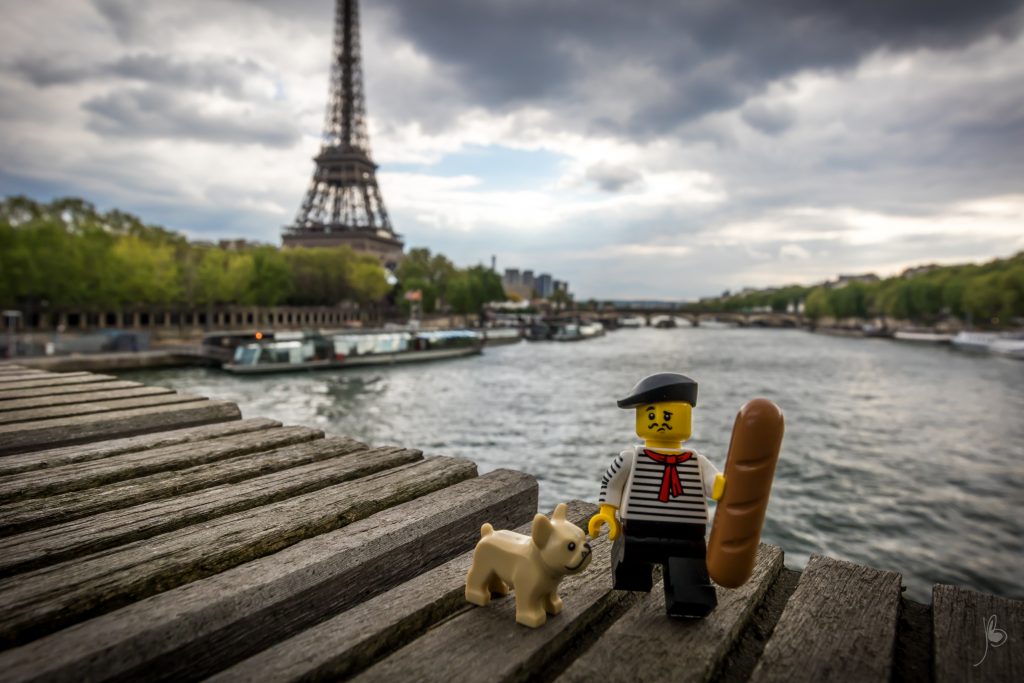 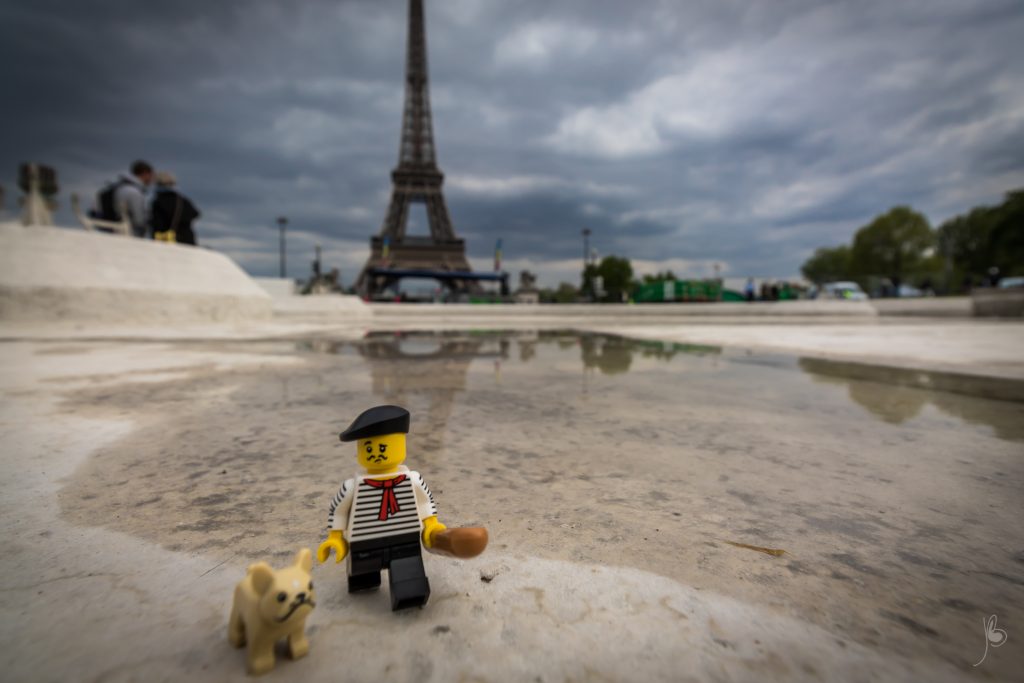 There, Marcel took a bike and continued his journey in the capital, along the “Berges de Seine” (the banks).

He stumbled upon a sculpture that made him think he was in another country but no, he was still in Paris.

At some point, he arrived at the Cathedral, Notre Dame de Paris where he stopped to get his portrait done by an artist. And he bought another baguette as he ate the first one during his lunch break.

Marcel then left his bike to finish on foot at the Palais Royal, a nice palace downtown Paris where people go to enjoy the gardens. There you can find an art installation called “Colonnes de Buren” made of black and white striped cylinders. Marcel met a sad mime. It’s not very easy to be a mime in those days.

His journey brought him back to Montmartre. He stopped by the Sacré coeur, a basilica and decided to sit for a while to enjoy the view. Marcel loves his city.

Marcel is a Parisian that loves Paris.

Marcel is a character that I had the opportunity to review as part of the Lego collectible minifigures series 17.

Why did I choose him?

The answer if pretty simple. Like me, he is French. Well, at least I am French and he is how people see the French. He is a caricature, a stereotype, a cliché…

Personally, I don’t really see myself in him. Ok, I wear a beret, but a white one (please Lego, make a white beret for me), I eat baguette but… I don’t own a French bulldog, and I don’t have a moustache.

Marcel is a great character. To be honest, if I was asked to make a stereotypical drawing of a French, or more precisely a Parisian, that’s how I would have done it.

Merci Lego for this awesome minifigure.

Nice post! It was fun to see all the different sites of Paris legofied.

Thank you. It was a fun shoot to make. A lot of tourists asked me what I was doing on the ground ;-)

He seems exhausted when he finally reaches Montmartre. Hopefully he still has the baguette to give him some strength back :D

(I never understood that stereotype… Particularly the thing with the mustache )

I was exhausted, like Marcel, at the end of the shoot, after walking around Paris, but I actually started with Montmartre ;-)

And me neither, I don’t really understand the French stereotype. Maybe it’s because I am French… :D

What an awesome tour of Paris! I’ve never been there but all these places in Lego perspective makes me want to see and explore Paris too! What a fun thing to do. I may have to give a tour of my little neck of the woods via Lego. It does seem a bit stereotypical, but the Native American Lego are far beyond stereotypical. I have only ever seen a Native American in the apparel of the Lego versions when they are performing in a Pow Wow which only happens like once a year… other than that they dress like everyone… Read more »

Thank you Joe. It was a fun shoot for me. Even if I know Paris, it was nice to go back to those places. For example, I had not been to Montmartre for quite a while.

These photos are amazing! I feel like I just got a wonderful tour of Paris. My favorite one is where he’s having his portrait done :-) I’m really looking forward to this minifig :-)

Thank you Lynn. The portrait one was interesting because while I was taking it, a group of photographers came by and stopped next to me. Some started to discuss with me and I became a model for a lot of them.

Paris <3 All the pictures are beautiful!!