Here I am, raising my hand and admitting that I’m guilty.
I’m guilty of not really having planned my photographic goals so far.
All I wanted to do was shooting Lego and sharing the results on social media.
But as I did the pictures of fellow Legographers began to change. Some images appeared to be more appealing than others. So I tried to find out how to improve my own shots. I began to think about what makes an interesting pic an interesting one. To date I learned that there are quite some adjustment screws; and I’m still discovering more aspects as this journey of mine continues.

Because  of our last post I took up the chance and started to reflect.
Where did I start my “writing with light”?
Where has it taken me so far? What did I achieve? Where do I feel I have failed so far?
And finally: where do I want to improve?

I made some sticky notes myself and placed them in a certain book by
Haruki Murakami (whose stories have often made me stop and think about the where, the why, the how).
At the end of two o seventeen I will hopefully remember the book and take the time to reflect on these notes. 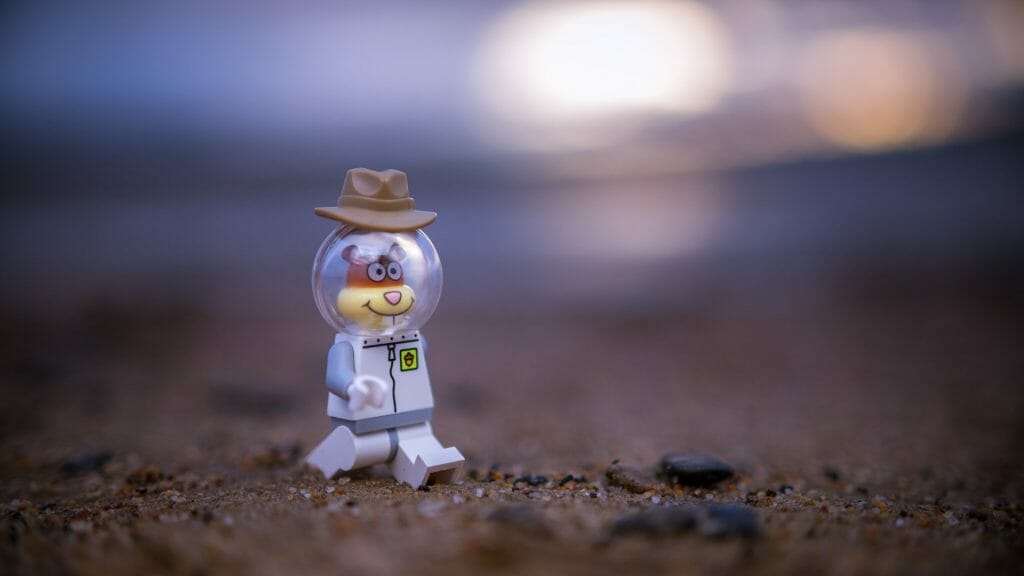 I am sure you will remember that book, Stefan :) I was going to say I never heard of Haruki and was going to look him up on my kindle, when I remembered a big book I got for a special birthday a few years ago. A book that looked so impressive, I actually never started it and was just sitting two shelves higher up as the book I used for my sticky notes. Waiting to be rediscovered. Guess what, the title is 1Q84 and the author was no-one less as Haruki Murakami. Talking about coincidences. I will for sure… Read more »

A big one to get started with Murakami! But indeed, there’s no such thing as coincidence…

This is such an epic shot! I like how the depth shows the horizon. This is something that I have been trying to do lately and I don’t think I have the right equipment to capture it just how I want…

Hi Joseph, I dont want to jump ship ahead of Stefan here, but I think you would be very surprised on the gear used in this one.
While big bodies, expensive primes and large strobes may add to the consistent performance and sometimes make it easier (or more difficult) to get the shot right, the best camera is still the one you have with you at the right moment.

I let Stefan comment on his gear, but I agree fully with you this is an epic shot !

Thank you, Joe and Boris.
I am happy that you see something special in this pic.
I can only agree with Boris that the best cam is the one you’ve got with you. In this case it was the camera of my cellphone. I definitely was very lucky I was there at the right time. Ten minutes after this the scene was a different one. I only upgraded to a DSLR in December and of course it gives more freedom. But never underestimate the gear you already have :-) And please: don’t stop…

I don’t have any goals beside working on my second year of LEGO365. I am not a fan of making a big goal for where I should be in 11 month other than I have shot 365 more photos.
I can see that I tend to work on my photos the way I learned so solve problems as a chemist/scientists by changing one bit, then changing another and so on = the process is more important to me, than just getting from A to B.

Sacha, I have to say that doing a second year in a 365 would be a massive goal for me. One I would fail miserable already somewhere in week two and a half and I have great respect and admiration for those who manage to do a full year, let alone like you embark on year two. I also have to agree with you that goals and objectives are a very personal thing, and what works for one, may just be very counterproductive for someone else. The journey is equally (if not more) important than the destination and there are… Read more »

Not a big fan of these new year’s resolution things myself.
But to me personally I found out that planning ahead is keeping me a little more focused and on track. After all these sticky notes are just an idea to try out. Or an invitation to do so? I’m looking forward to your daily pics to come! See you here or on IG ;-)