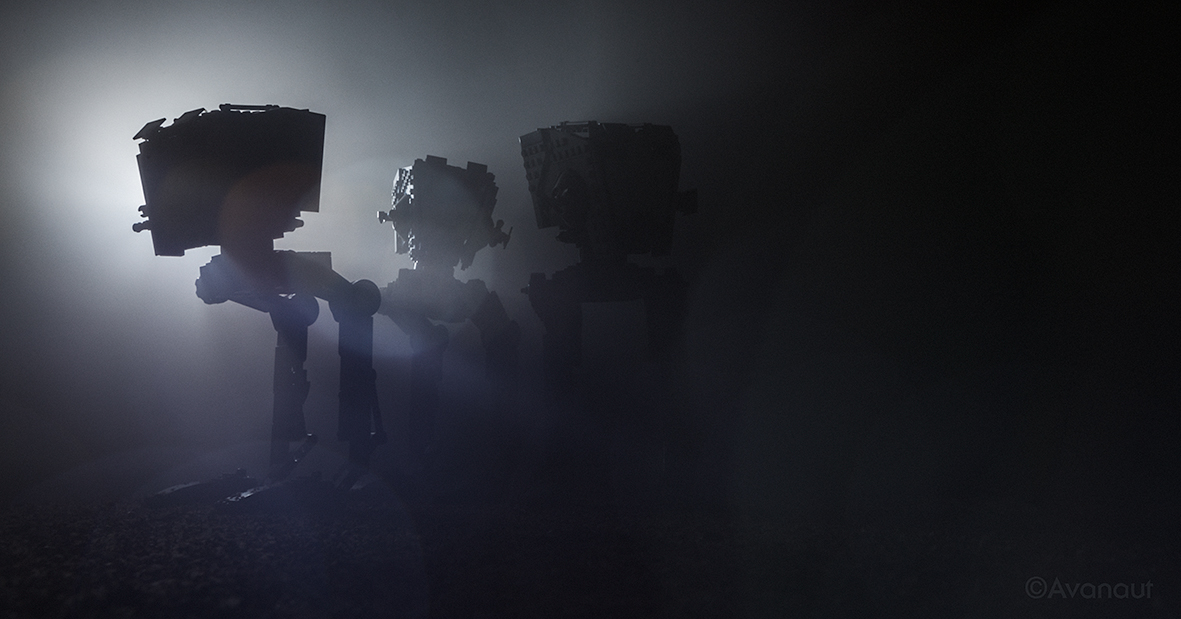 One of the most bonkers a concept in the Star Wars universe are the walkers. You know the AT-AT (All Terrain Armoured Transport) and AT-ST (All Terrain Scout Transport) walkers, they are downright ridiculous in their vulnerability when used for what they were designed for. They just look so cool that we forgive that inconvenient little weakness.

The bi-pedal AT-ST walker, a.k.a. the Chicken Walker, was originally a model built by Joe Johnston while designing and preparing for The Empire Strikes Back back in the late 1970’s. It was a test build, a study of form, that’s all, but when George Lucas saw it, he requested it to appear in the Imperial attack on Hoth sequence. Tom St. Amand and Jon Berg rigged it with an armature needed for stop motion animation and off to the cameras it went. The walker ended up in two shots in the movie – and that was all it was ever supposed to be.

But, alas, the little walker didn’t go down so easily. It turned popular enought for a new walker to be designed for The Return of the Jedi. It had the same legs but a different top, easily distinguishable from the original (which does not exist anymore), several miniatures were built. You can’t imagine the battle on Endor without these wacky walkers.

With Rogue One: A Star Wars Story, the AT-ST walker returns, as seen in the second trailer.  In the past, Lego has made several iterations of the AT-ST walker, and with the new movie now looming ahead, Lego looks into the walker once more with a brand new AT-ST walker set 75153.

I built the new walker today, it was fun, but my immediate impression was that it looked a bit off. Is the walker different in the upcoming movie? Without further information of a different AT-ST, and looking through the available material, I’ll have to assume it is supposed to be the same, last seen in The Return of the Jedi.

This got me thinking, was this impression of something being off because I was simply so used to the Lego AT-ST walker I already had? In 2009 Lego released The Battle of Endor set (8038) with an AT-ST as one of the builds in it. I still got it and I use it for photography from time to time. The new walker looked different and I wondered which one actually is closer to the real thing.

Now, I know these are not scale models, they really don’t need to be that accurate, but I decided to make some measurements to satisfy my curiosity. So, bear with me.

The Lego minifigure is 40,15 millimetres high, if we use the male height of 182 centimetres, which is what scale modelers use as a reference height, we get a scale of approximately 1:45. According to starwarswikia.com, the AT-ST measures 8,6 meters in height, this means  the Lego walker should be about 19,1 centimeters high in this made up Lego scale. Amazingly, the old walker measures 19,5 centimetres, almost exactly to the correct estimated height! Yay! The new one measures 25,0 centimetres, and as such is too tall.

I made a comparisons chart to see how well the models represent the original proportionally. For this I scaled both my walkers to match a schematic I found of the real thing. Now, while the new walker is tall, it captures the overall proportions pretty well, far better than the old one, as it turned out. My first impression was wrong, the new walker is actually pretty close to the real thing. 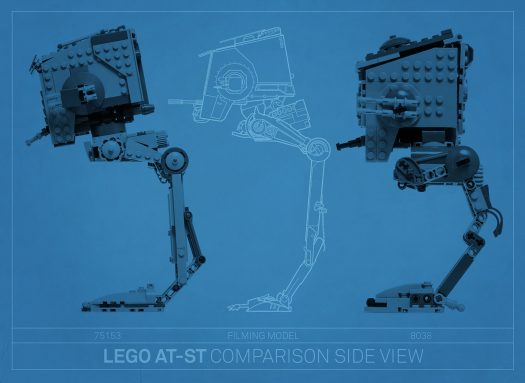 The schematics I used for this are from starwarswikia.com and they are based on the blueprints of the AT-ST walker. The blueprints apparently served as the guide for constructing the full size prop for Return of the Jedi, but looking at the actual filming miniature, this comparison thing gets a bit complicated. See, in many ways the schematics looks different than the filming miniature. For example, the head should be longer in the back and just a touch taller in the “forehead”. The head on the Lego AT-ST is pretty good regardless of these differences, it only really misses the mark on the angle of the front end, it should taper backwards a little more.

Looking from the side, the legs are even better than the head, they actually have a great silhouette all the way to how the ankle is constructed. The foot pads are a touch too big, but I think it’s actually quite adorable. It adds a layer of humour to the design and that’s all in a good way; think of Charlie Chaplin’s Dance of the Rolls in The Gold Rush. Timeless comedy!

With the differences between the schematics and the filming model in mind, the Lego legs look closer to the former than the latter. Is it possible that the brick just works that way, or did the schematics serve as the reference rather than the model when this set was designed? I would love to hear more about this from the guys at Lego, I know they have knowledge on the filming models far deeper than I have. Actually, I would love to chat with those guys over this for hours.  :)

Anyway, at the end of the day, the only issue I have with the Lego walker is with the front view: the legs are too thick to fit within the limits of interpretation. The thickness takes away from the gracefulness of the design, it drags the optical centre of mass down. With the big foot pads and thick legs, the model looks bottom heavy. I wonder if this is a compromise simply to strengthen the legs and stability of the model, or to help balancing out the big knee joints constructed with double Technic rotation pins (parts 44225/44224)? Is it even possible to construct a thin leg like this in an official Lego model? Maybe there just isn’t a way around this.

It’s a toy and compromises are not only acceptable, but inevitable. 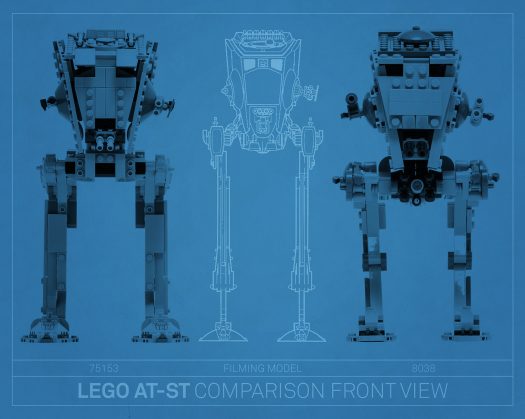 The fun thing is that with this construction the big knee joints now work, it’s great even if the movement is very limited. Come to think of it, it would be great to see a walker with a working ankle joint along with an adjustable knee, it would bring a significant improvement to the range of the model. To be able to position the legs asymmetrically would be much more interesting than seeing the model always standing with parallel feet static on the ground.

Despite my nitpicking, and nitpicking it is, this is a fun little thing. The robustness is a small sacrifice for the sturdier construction. This is a solid model and isn’t easily tipped over, a thing I often had problems with when photographing the old 8038.

Would I use the new walker for photography? Of course! I love my old model, I like how it works in scale with the minifigures. However, the new one is proportionally way closer to the real thing, it has less grace due to the thick legs, but it’s richer in details. The model looks great from certain angles, I’m sure it will work well in photographs and I fear it may retire my trusty old walker altogether.

Dear Vesa,
Thank you so much for this amazing post!
Evidently, you put your heart in your brilliant work. I’m very impressed.
Also I really love your fantastic gallery. Have a great day!
Kind Regards,
Ann.

I am a sucker for the design of Star Wars: from Ralph McQuarrie’s production paintings to the worlds appearing on the silver screen, from Joe Johnston’s pencil sketches to the wonderful miniatures built for filming. It all works for me. I am following modern cinema in this respect as well, but Star Wars and Lego are an extraordinary match, not easily topped any time soon.

Wow! Such a thorough and in depth review. It makes the “pew! pew!” noises I made upon recently completing my build of the latest chicken seem even more childish! Although, the nagging uneasiness I felt when the 75153 was stood next the 7657 on my shelves, now makes sense. It is those chicken legs that just aren’t quite right. Maybe these walkers need to do a little running? ;)

Thanks! I think each Lego walker is a sum of compromises, and they should be. A dead on Lego replica wouldn’t even be fun. The legs (front view) and the angle of the front of the head stick out a little with this but I think fixing that wouldn’t take away the playfulness. Maybe some refining happens for the next release, which will come around some day, for sure.

Great piece on a great SW vehicle. Just wish the new set’s legs were articulated. I’ll be using mine in more photos I reckon!

Yes, a little articulation would be great for photography. I presume it’s a budget thing: the model cannot have too big a brick count, or cost, in order to fit within predetermined price range. That simplifies the construction at times, I guess.

Awesome post Vesa! Being a Star Wars fan I really enjoyed those comparison. They’re so accurate that you make us think that those AT-ST are real! Impressive work, as usual!