I’ve always used a dedicated camera to take my photos. Phone cameras were not suitable for serious picture taking when I started out, and for my sort of photography a proper camera is always going to win out over a phone. Lighting with studio flash is just a non-starter with a phone camera.

However, In the back of my mind I’ve always had a feeling I could do a lot of the stuff I do with my big camera using the camera in my current iPhone 5s. I don’t use a lot of fancy lighting techniques that require flash, and I’ve got enough random light sources lying around that I could probably get a close approximation to my most common setups.

Last weekend I decided to take a photo with my main camera, and then try and take something very similar with my phone to see how close I could get.

My flash setup with the DSLR was quite simple, a single SB-800 flash shot into a diffused Speedlite Pro reflector. It’s a setup I use when I want to get the light really close in so I can get a sharp falloff into shadow. 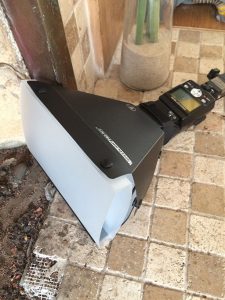 The set for this shot was the fireplace in my back room. I used my favourite robot with his LED eyes lit up, which makes the exposure a little more complicated. 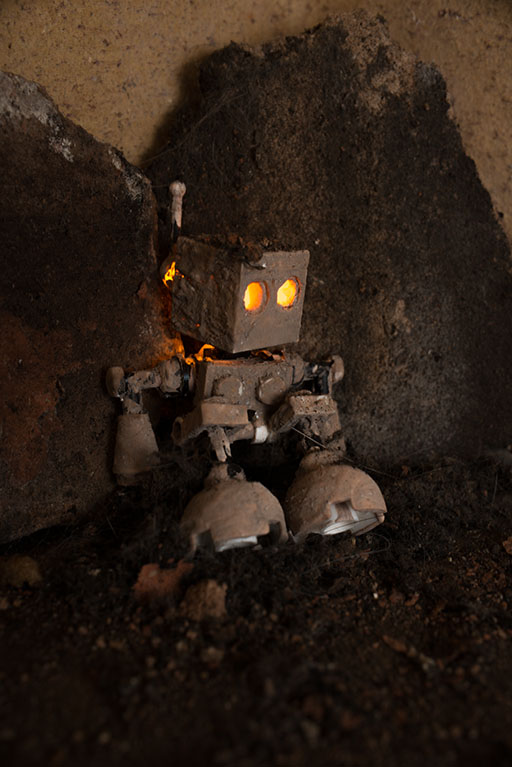 This is what I ended up with straight out of the camera. It’s lit mainly with the flash, but with a longer manual exposure to allow the eyes to illuminate. My normal shutter speed when working with flash is 1/250th, but that’s nowhere near long enough to see the eyes light up.

It needs some work. There are stray cat hairs, the top of the image is too bright, the white on the bottom of the feet where I forgot to dirty-up the robot stands out. Anyway, I did some editing in Photoshop, and this was the final result. 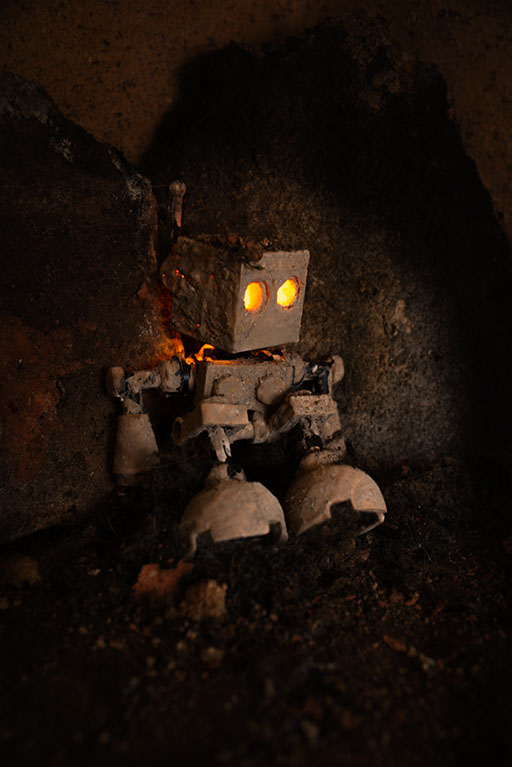 It’s OK. It captures the feeling I was going for.

Now, let’s get something like this with my phone.

For a start I need a light source. I’m going to use a SAD (seasonal affective disorder) lamp. They’re great continuous lights. Guaranteed to be daylight colour balanced (as that’s the whole point of a SAD lamp!), and not counted as photographic lighting equipment, so priced very reasonably. I picked up my LED SAD panel from Amazon for around £30. Photographic spec LED panels do not sell for £30.

As luck would have it my LED panel is almost exactly the same size as the Speedlite Pro kit reflector. With the lightsource size the same, the quality of light and shadow characteristics should be identical. 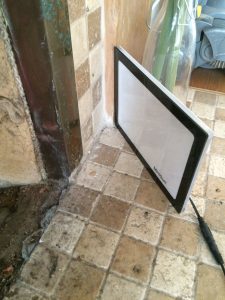 This is it in action. 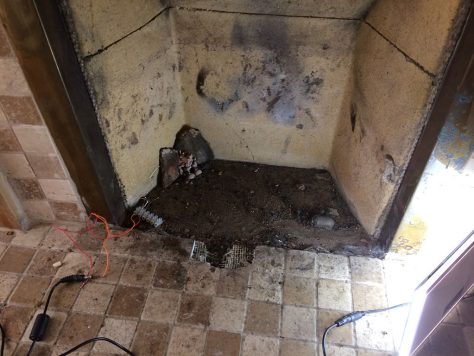 Now I was hoping to use the built-in camera app to take this shot, but that idea went out the window after the first attempt. This scene is very low-key, or dark, as most people would say. The iPhone camera tried to compensate and ramped the brightness way, way up. 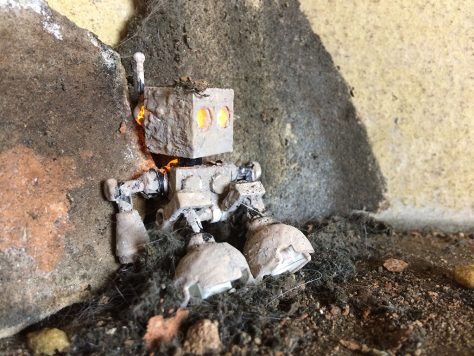 OK, so I’m going to switch to Camera+. I don’t know if this is still regarded as one of the best camera apps for the iPhone, but it lets me control the exposure, so it’s fine for me. I later worked out you can double-tap on the built-in camera app to control the brightness, so I probably didn’t need a 3rd party app after all.

I still need to keep the exposure long enough to get the eyes lit up, so I focus on the eyes to get the initial exposure, but the main LED panel is throwing a whole lot of light at my scene and blowing it out. My LED panel doesn’t have a brightness setting (these sort of useful features are why you pay the big bucks for real pro-level photographic panels), but I can make it darker by sticking stuff in front of it! I ended up putting an Ikea placemat and the Speedlite pro diffusion panel in front to calm the light down to a sensible level and keep the eyes glowing. 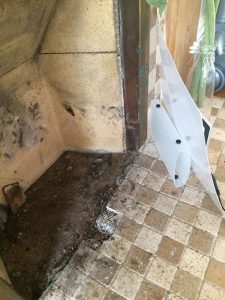 I can make small adjustments to the light intensity by moving it closer or further away. OK, now we’re getting somewhere. 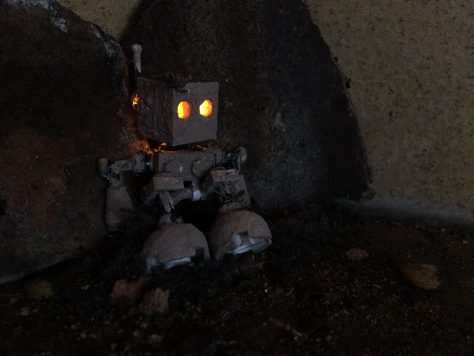 The position of the phone camera on the edge of the phone lets me get really really low. The shot I ended up favouring was impossible with my DSLR. There’s no way I could get that low with my Nikon without stacking the whole set on some books (which I have done many times in the past).

This is what I ended up with straight out of the camera. 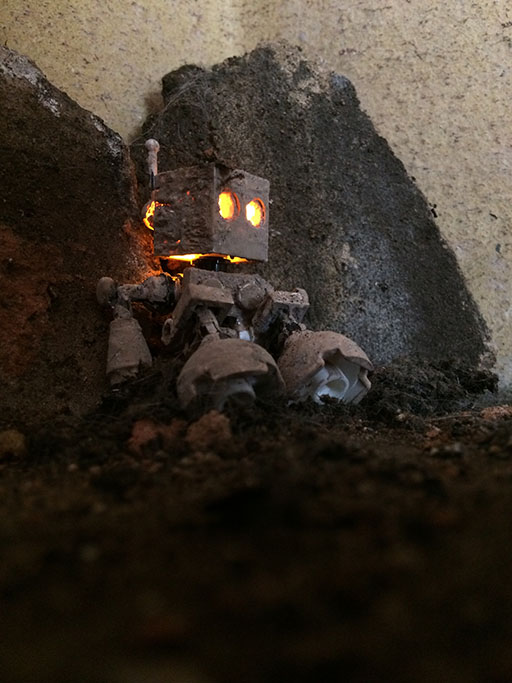 We’ve got some similar problems to the initial shot from the DSLR. Cat hair, top is too bright, feet are too white. All fixable in Photoshop in the same way I did for the DSLR version. So, after a bit of fix up, here’s what I ended up with. 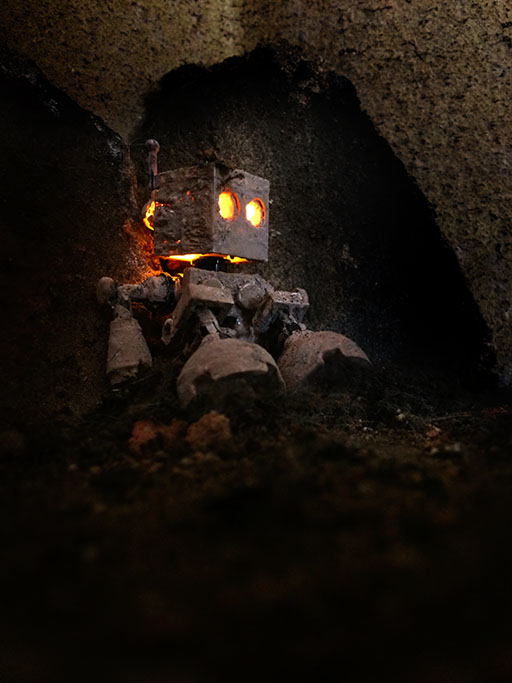 I’m pretty pleased with that. I actually prefer the phone version to the DSLR shot. The low angle give a different feeling to the photo.

It’s not perfect, the phone version doesn’t stand up to closer inspection. It looks like the camera picked quite a high ISO setting so there’s a lot of noise reduction blur. What I should have done is manually set a longer shutter speed in the hope the camera would choose a lower ISO. I’d also use some form of tripod or support to steady the camera. Definitely room for more experimentation. 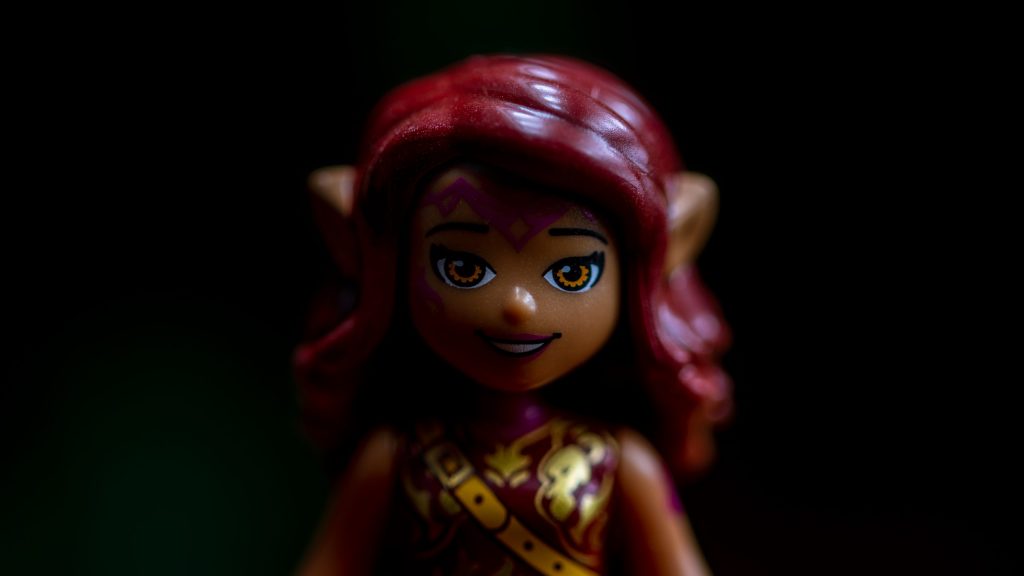 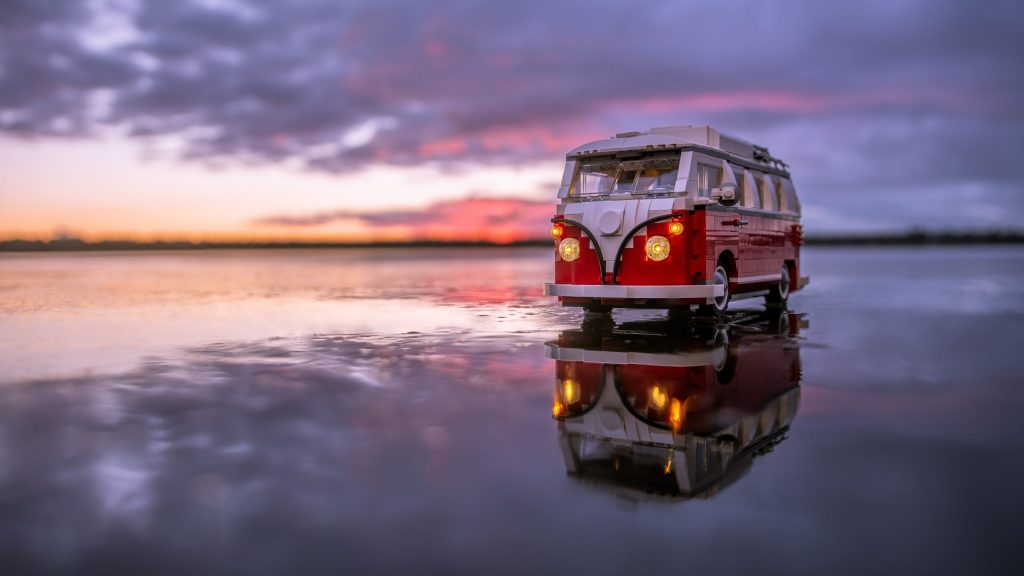 All I have is an iPhone, so this is useful. I can see the problems (though being able to get really low is an advantage), and I appreciate how you were able to get the lighting to work in the end.

This is a great experiment and I am glad you shared it. What you have shown here is that an idea is created by a person, not equipment. Sure, the DSLR photo holds up better upon zooming in and would be better for printing, but your preferred phone capture would be fine for Instagram. You would still be sharing your idea and there isn’t any reason that idea cannot exist in two different forms. Thanks again for sharing. I really liked how detailed you went in with capturing the light.

Mike, This is a great post, thank you so much for sharing. For me it really spotlights that photography is not about equipment, but ideas. You can have the latest 4K camera and a full studio lighting set-up, but if you don’t have a worthy idea and subject, your money is better spent in other ways. I really enjoyed following your process, even I learned a few tricks. Again, thank you for sharing! Shelly

This is a good challenge to take on. I’ve always appreciated the low angle you can get when shooting with a mobile. I might just try it!

I agree, love the low angle you can get with a phone. Makes a different photo. Good post

Great post! I’m always looking for good ways to light my photo’s naturally…. and I’m always struggling. (To me) it’s good to see that you use more photoshop than I thought you did… I’ll have to work on those skills some more.

This was fascinating. Thanks. I’m new to this and have been using natural light only as I can’t get my phone to operate properly in low light.