I love the LEGO collectible series and I think this latest group, series #15, is a winner. I’ll confess, I haven’t felt that way about several of the more recent series. But #15 seems to capture the fun and whimsy of the earliest collectable series.

There are so many great characters I have difficulty choosing my favorite. So far the Fawn is in the lead with the Ballerina and the Flying Warrior battling for second. Wait! Who am I kidding? The Shark Suit Guy is awesome and the Clumsy Guy with his crutches certainly present some interesting possibilities. Hold up! The Astronaut will make an awesome addition to my space themed photos. Who can’t use another astronaut to photograph? 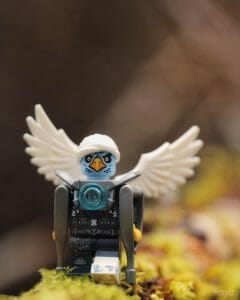 As you can see I have no shortage of favorites. 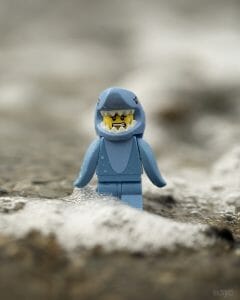 The Tribal Girl is another great addition to my collection. I have always been attracted to the native american figures and love creating photographs with them. Since I have a variety of native americans, maybe its time to work on a dedicated series. Oh the possibilities!

I’m also thrilled we have new accessories like a pig and a skunk to play with. I had no idea I was in such desperate need of a skunk to photography, but I was! Speaking of accessories, the Wrestling Champion and the Jewel Thief both have fun hair. Even more possibilities!

Thank you LEGO for presenting such a marvelous set of mini figures in series #15. I realize these little blind bags aren’t created simply for the LEGO toy photography community.  But they sure do have a way of inspiring some wonderfully creative photographs.

Have you picked up any of the Series #15 mini figures? If so, which one(s) are your favorites and why?

Do you remember your very first collectible mini figure? If so, which character was it? 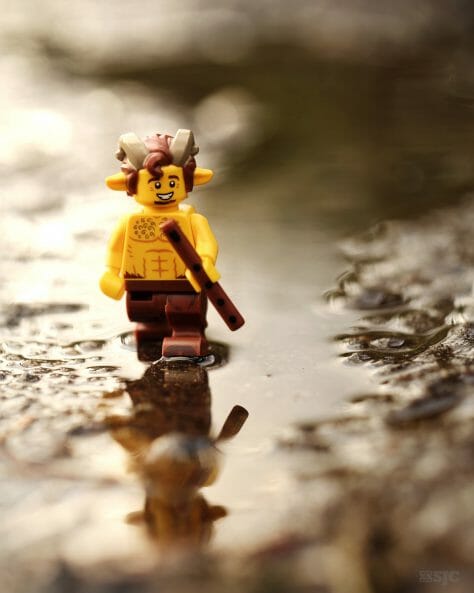 I couldn’t agree more that this is the best Collectible Minifigure set in quite some time! Not since series 10 or 11 have I felt that I needed ALL of the minifigs in the set. I’ve never been a Simpsons fan, so both of those sets were a disappointment for me, and while Halloween is fun, the photos that I’m able to get with those collectible figs are extremely limited. And while Series 13 had some gems, the creativity that had been present in earlier sets was a bit lacking for me. Of Series 15, I think my favorite is… Read more »

James, I’m glad I’m not the only one who thinks this is an inspiring collection. Like you I enjoyed the monster series, but not so much to photograph. I found them too limiting, but I sure think their cool. For some reason #15 is hitting all the right notes. And you’re right about the Queen, she is lovely and the “dress” is fabulous! I look forward to seeing what you come up with as you explore the series. Welcome back from the “dark ages”. I think your first two mini figures are awesome. I have a personal fondness for the… Read more »

Ooh, that’s cool! I’ve always had a fear of heights so rock climbing was never quite my thing haha. I’ll always have a special place for that minifig though, not only because of being one of my first blind bags, but for being the subject of my very first LEGO photo! From then on, I was hooked.

Series 15 feels like such a good jump ahead and a return to form from LEGO. I wasn’t too impressed with the dedicated Halloween series and the Simpsons series just felt too prescriptive to do much with. I read somewhere that they’ve changed their processes for printing parts and I think it really shows. The detail and amount of arm/leg prints in this series outshine all the previous ones and we get so many great new parts to play around with. Now I just need to find the time to complete my photo series with these… 5 down, 11 to… Read more »

Very inspiring collection. As they have been put on sales, everybody started buy them.
These minifigures have great details and new items, for example the tutu of the dancer and the flute of the faun.
These are also the mostly minifigures photographed, including sharks, obviously.
Well done by the Lego Community, even if they could put food figures, like the series before the one of the monsters. ;)

I’m glad you agree! The tutu is a fun prop. I’m not sure how many stormtroopers in tutus i’ve seen, but more than a few. I think this series will continue to inspire great photos well into the future. :)

You’re absolutely right about the arm and leg prints. It’s been a rare mini figure with an arm print, yet with series #15 there are lots of great examples. That level of detail really adds to their charm. I’m like you…if only I had more time!! :D

I’m glad to hear that you love Series 15 too. It’s become my favorite series from the last few years and it’s been very fun to photograph them. The ballerina is by far my favorite. The printing and the tutu are fabulous. It’s been a challenge to get her into a position that even slightly resembles real ballet but I’m having fun doing it :-) I’m enjoying the Jewel Thief more than I thought I would. Once I started taking her photo, I fell in love with the character and the expression on her face. The Queen, Animal Control Officer… Read more »

I also think it’s a great series even though I still haven’t been able to put my hands on one of these new figures. But because I’ve seen so many photos of them on social medias, I don’t feel motivated to take such photos myself. Maybe this will change once I will find them in a store…

Its hard to feel motivated about a particular series when all you see are photos of them from other people. I feel your pain. But rest assured, this is a good series with lots of play possibilities down the road. :D