I wrote a while back on how it’s a good idea to wait a while before deciding on your final image from a shoot. You’d think I’d take my own advice occasionally.

I thought I’d take a LEGO photo for Valentine’s day this year; it’s always a good excuse as I’m a sucker for Stormtroopers in romantic situations. This year I had a secondary reason: my itching desire to use a Force Awakens Stormtrooper in a photo. I’d had a few of those guys lying around unused for weeks, still clean, pristine, and free of dust. Nothing stays that way for long in a house with three cats.

I took the image on Valentine’s day itself, processed it, cropped it, and sent it off to its final destinations on the Internet. I didn’t have time to let it “mature”, a Valentine’s photo posted after the 14th of February is obviously wrong. I thought I was done. I think I might even have made cup of tea to celebrate. This was the image I chose: 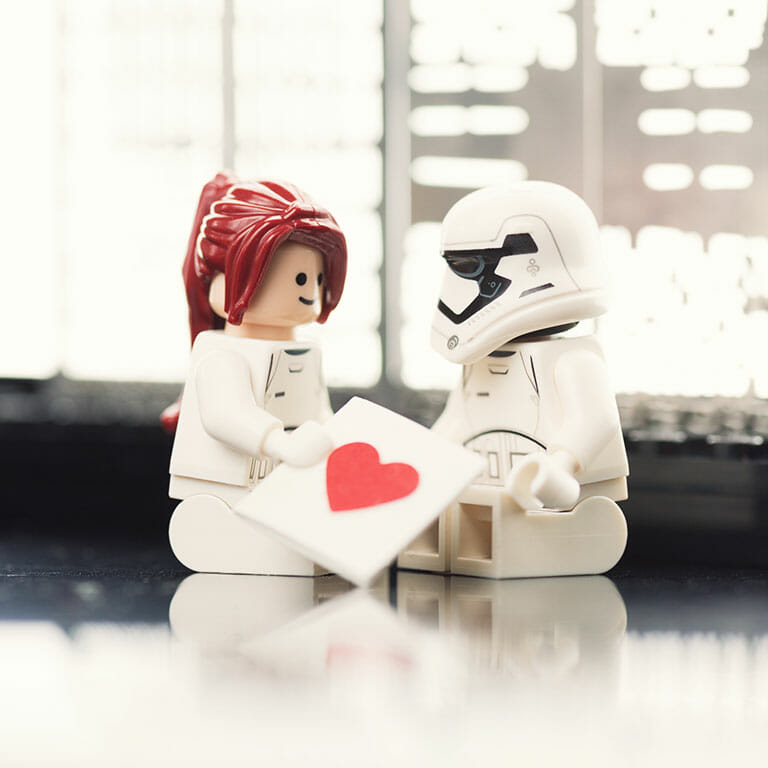 Then Kerry made a small comment that changed all that: “where’s the story?”, “perhaps he should be writing the cards?”. She was absolutely right. The act of one Stormtrooper giving a card to another isn’t particularly exciting. What if the Stormtrooper was writing the card, what if he was writing many cards, trying to cover as many bases as possible? Goodness, this is a much better photo idea!

Over the next few hours I created many miniature cards and set up my little scene. I was pretty pleased with the result. Much more my style. And this is the later photo: 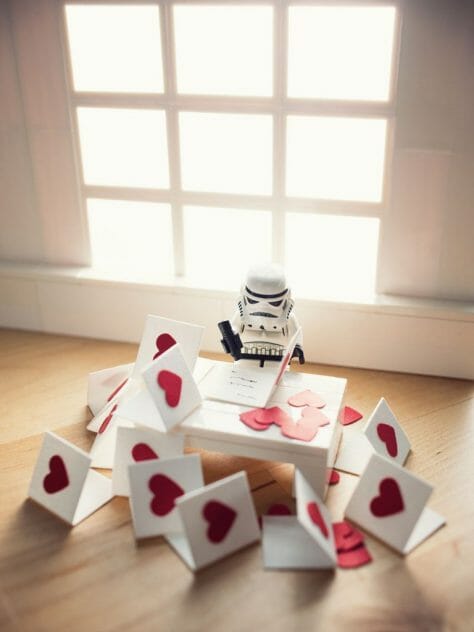 Of course, I’d already shared my original photo. Valentine’s day was done, photographically. Posting two photos would be wrong. The best I could do was write a blog post about it and hope someone, maybe even me, learns a valuable lesson about not rushing to share a photo. 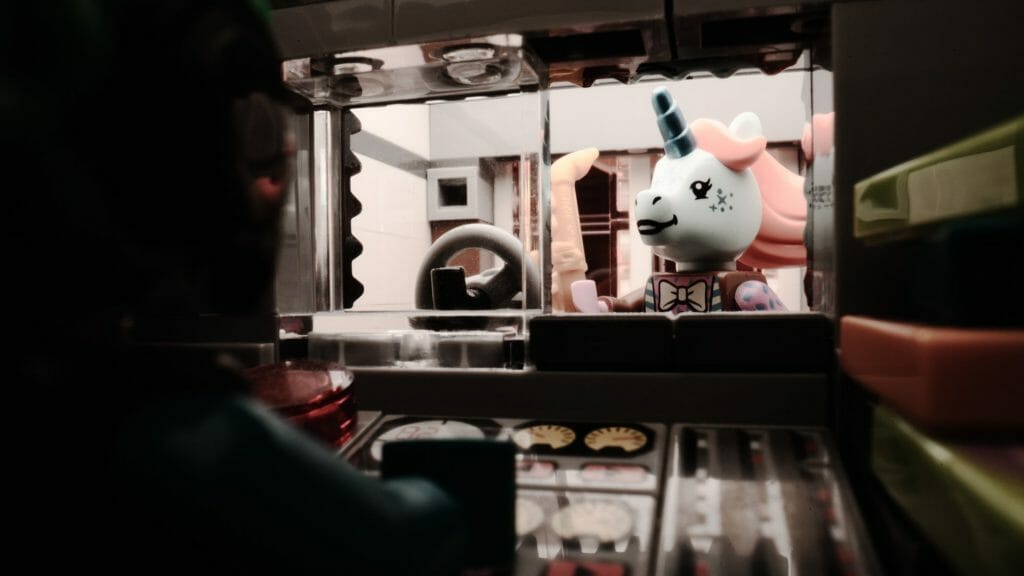 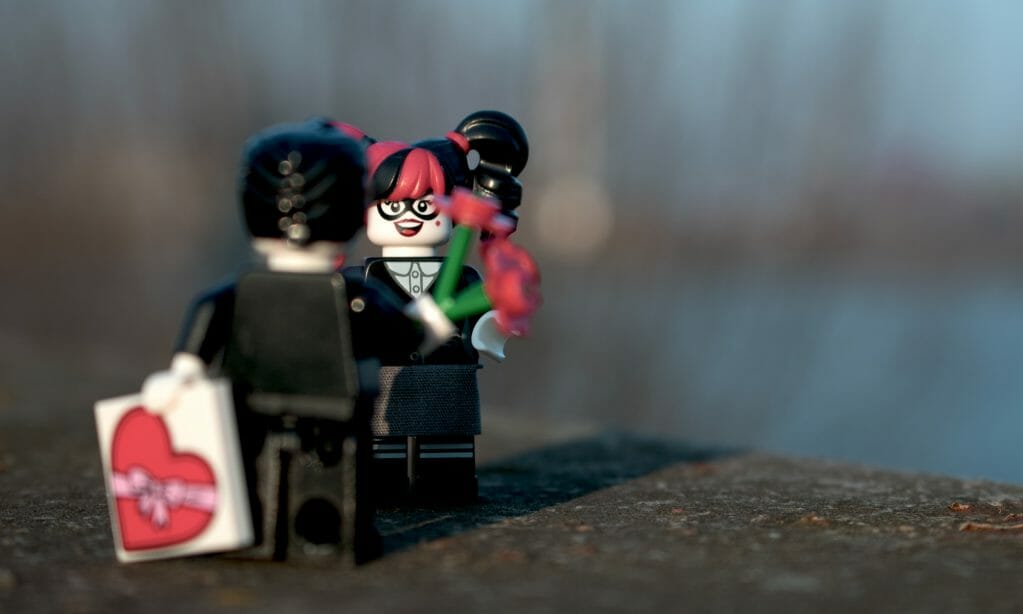 I think it’s important to have someone who is close to you who can give such great feedback. With Kerry’s one comment you managed to up your game and create a wonderful image. I love the thought of the little storm trooper as Romeo, frantically trying to cover all his bases . Or is he the lonely storm trooper desperately trying to reach out to anyone to feel loved? Either way the set is wonderful, I love that wall of windows behind him. It seems as if he is in his ivory tower. I say publish it whenever you want,… Read more »

Thanks Shelly! I have built-in control systems in my brain that prevent me posting this image an any day other than Feb 14th. My brain just tells me it’s wrong :)

I love your descriptions of his possible feelings, very interesting to hear how my intention translates into the viewer’s story.

Wow, GREAT job on that second image, Mike! You’re right, it definitely “feels” more like a classic Balakov photo. I too have struggled with this same issue, particularly when it comes to holiday photos. I often forget about a holiday until the day of (or simply don’t have time to take a photo beforehand), and have “given in” and taken a bad or uninspired photo in an attempt not to miss out entirely. Then, of course, the better ideas roll in – but too little too late. I agree with what Shelly said about having that support person to honestly… Read more »

Thanks James! That feeling of not missing out is one I suffer from all the time in situations like this. The relief at getting any decent photo at all just shuts off any further creativity for me. I need someone to kick me back into creative mode :)

I agree with Shelly. It is a beautiful and timeless image. Could be posted on any other day and still tell its great story. Wonderful how the inspiration came about.

Thanks Leila! That image is currently my all-time favourite of my “Stormtrooper romance” photos :)

Hi Mike
I have to agree with all above – beautiful image, and a great story to go with it :) Could I get you to write a blog post about the amazing lightning you have in this “valentine -pic” I love how you have the beautiful window with soft “sunshine” and how you fill the light infront of the figure. A behind the scene story about light would be so great to get, do you use two speed lights or do you use a reflector? I’m so curious :D /kristina

Thanks Kristina! I’m sure I can manage a blog post on the technique :)