When Kristina proposed to make an exact copy of a photo from another photographer, I felt very excited about this challenge. I was also excited to see the results of Kristina’s own challenge which I think was a wonderful mix of the style of both of her and Vesa; her own inspiration.

I was so excited about this challenge because I wanted to pay a tribute to the toy photographers who gave me the itch to take photos of LEGO minifigures. I tried to replicate not one but three photos, each from a different toy photographer. I also would have liked to try a few more but I consider I have neither the skills nor the time to do them right now.

Overall it’s been very time-consuming, more than I initially imagined. During the holidays it took me a few days deciding which photo to recreate. I started from a list of around 100 photos that influenced me before I started to be a toy photographer myself. I aimed for being the closest to the original photo so I started by eliminating photos that I knew I couldn’t reproduce. It includes those with toys or props I don’t have and all the great outdoor photos.

Even the morning of the shooting I wasn’t really settled on which one I was going to do. After the initial sort of the 100 photo lists, I had a dozen left. There was one from Marmotuca (AKA Marmotuca on Insatgram) I really wanted to try to replicate. It seemed to me it was challenging while still looking feasible.

This photo is rather special to me. First it is one of the oldest toy photo I still remember when I saw it for the first time. Then coincidentally it was taken (according to Flickr metadata) the same day I bought my DSLR and decided to get into photography. Finally I had this picture in mind (among a few others) when I made one of my favorite photo of 2015.

I tried to find in multiple stores where to buy something similar to the little color stars used in the original photo, but failed at it. Instead I used golden stars but in my opinion it does not look as good as the original. Another difficulty was finding the right way to curve the blue paper used for the background. I also failed at this. 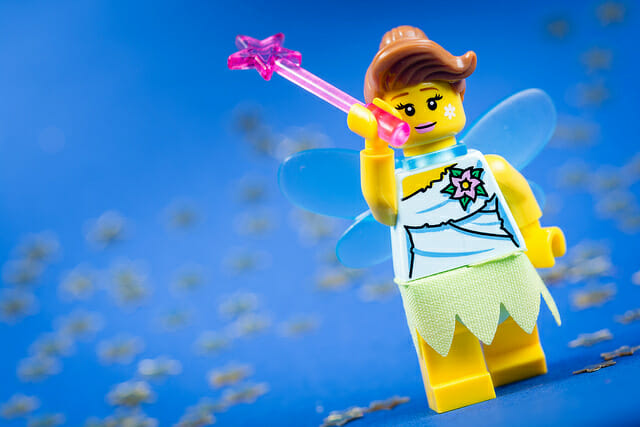 After that one I decided to do two additional exact copies because the weather was too bad to go shooting plastic outside. I find it much easier than for the first one. Maybe because the layout is simpler. Or maybe because these pictures are from two photographers that have inspired me more than anyone else.

The first one from Lynn (AKA DigiNik13 on Flickr and AKA @handstand30 on Instagram) is one among many awesome images that has inspired me. It was very hard to choose which one of Lynn’s photos to replicate as she has made a ton of amazing pictures. I wanted to do one of her photos because each time I work with artificial light, I have her photos in mind. It wouldn’t be lying if I said that she is the toy photographer that influence me the most. 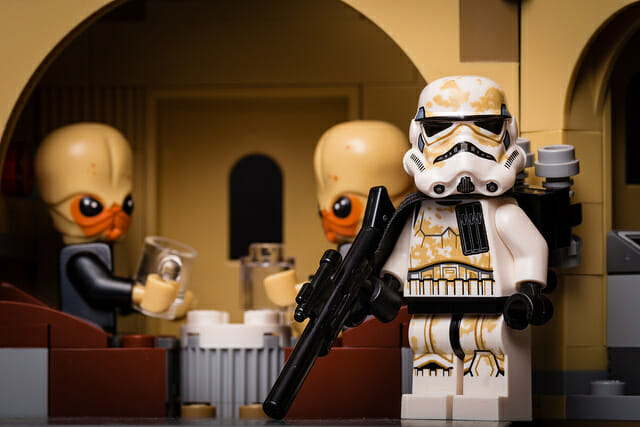 The second one from Peter von Kappel is part of a hilarious series where Obi-Wan is drunk at the Mos Eisley Cantina. It’s my favorite photo from the first toy photographer I stumbled across on Flickr. It’s because of his photos I started to look for more photography with LEGO, and by transitivity I started to take such photos myself. This challenge was time consuming. In some ways I would have liked to have spent this time on something that felt like one of my own photos. Indeed, it doesn’t matter if I can spot small or large differences with the original images, none of these pictures that I made seem like one of my photos. I feel something strange in me, like I didn’t create these photos. Yet, I really enjoyed this challenge.

I feel I’ve grown from this experience because it taught me to be very careful about tiny details. I could have spent far less time shooting the three photos and came up with something of equal quality. Multiple times I could have said: “ok that one is good enough”. But each time I was able to spot small differences, I forced myself to adjust a small detail to be closer to the original. I’m pretty sure this will make me pay more attention to details when shooting future photos that I’ll be able to call “mine”.

These are really great! Well done on your copies!

I think, in case you wanted to have another go, the small stars are actually baking sprinkles that might be found in the baking isle! (You might know that I guess, but still have been unable to find them! :) )

Yes that was my guess for the stars but I searched in three different stores and I wasn’t satisfied with the only ones I found. They looked too thick and I didn’t want to waste money (they were quite expensive) for something I was sure wouldn’t work. Sometimes I have regrets that it might have turned out better but anyway it’s too late.

This is amazing! It’s such a great tribute and I love the story. You copies are stunning! I’m so glad you joined the challenged and shared your work here on Stuckinplastic, Thank you!

Thanks Kristina! It was not an easy challenge but still lots of fun :-)