Is a photo only a result of time and place or is the photographer also a key-element in the making of a photograph? Being in Seattle for the show has made it possible for me to borrow Shelly’s amazing and beautiful robot.

I have to  admit I have a small crush on him.

As I confessed earlier I usually stay with my toys, and they stay with me. I reuse the same toys over and over again. There is something in them that I see and love, that I want to share with the viewer. Anyway back to the robot that I have a big crush on. Yesterday I got to borrow him for my shooting, and in my head I saw me taking these amazing pictures that Shelly makes with him. In Shelly’s pictures his is a curious robot exploring the world around him.

And if the truth be told I wanted, (or want) to make the same images. But just by looking at the Robot through my viewfinder I realized he doesn’t even look the same in my camera. And I don’t think it’s a Nikon over a Canon issue. And truly this troubled me. Was this the same robot? Looking at him as my inspiration I realized that I don’t see the same colors as Shelly does, he isn’t as grey in my view… And in Shelly’s world he is kind of chubby, and occupied with exploring the world around him, in my viewfinder he became tall and really slim and not as grey. I know that photography isn’t objective and can’t capture the truth. Looking at the Shelly’s Robot in my viewfinder all I saw was a lonely lost Robot, that didn’t know what to do or want… Where did Shelly’s curious exploring Robot go? I had to give him Teddy to comfort him… 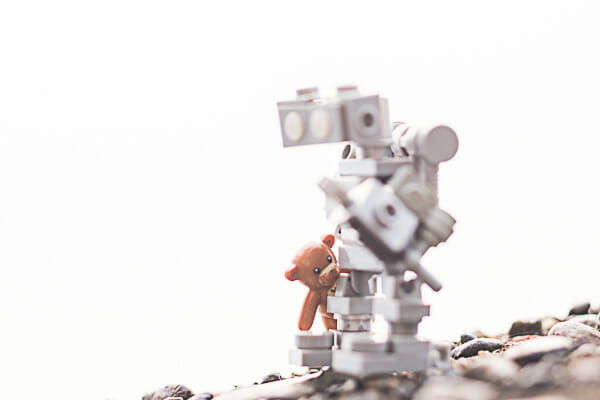 Fascinating! And this is perfect for what I am planning to post later today. I hope the opening goes well tonight! Really wish I could make it to meet you, Kristina, but alas, my schedule won’t allow it. Looking forward to all the great images and stories you create of your time in Seattle!

I can only agree, would have loved to meet you here in Seattle as well.

This is something we could do for future safaris.
People exchange one toy and use it for a bit and then later on that night while exchanging photos, you see what different outcomes there were.