The other day I wrote about motivation and how to find it (or keep it). One example I used was experimenting with a funky lens, the other was getting new subject matter, like new toys, to photograph.

This past weekend was our local LEGO convention BrickCon. This is the one weekend a year when 20,000+ people try their best to look at hundreds of LEGO models in 12 hours over two days. It is sheer madness! I escaped the chaos this year by working for my local toy store, Math ‘n Stuff, in exchange for store credit as well as a pass that allowed me to gain access to the merchants on Friday and avoid the public hours on the weekend. (Think about that for a minute… I worked for trade to gain access to the other merchants so I could buy LEGO. I told you it was madness!)

Of course this was the best decision I ever made and I am sure I spent more money than I should have. But hey, BrickCon only comes around once a year!

However, the mini figures I purchased and I’m most excited about, were not made by LEGO, yet to me, they represent the future of the LEGO mini figure and what is possible with a little imagination. 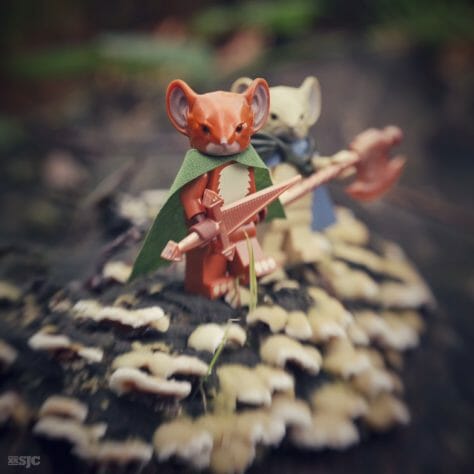 The first are the characters from Mouse Guard by David Petersen. These came to my attention earlier this year at the Emerald City Comic Con when there was a complete town created from LEGO that was populated by these wonderful creations. It seems like the fine folks of Crazy Bricks had a KickStarter that I somehow managed to miss that funded this entire project. I was so pleased when I heard that the mice were available that I picked up all that I could.  (It is interesting to note that these mice were created by three different companies that are each creating amazing third party accessories for LEGO mini figures: Crazy Bricks, Citizen Brick and Cape Madness.) 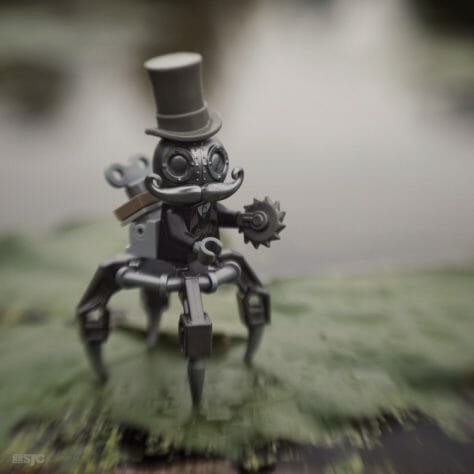 My second amazing find was also at the CrazyBricks booth; these wonderful creations are based on the designs of Doktor A. When I first laid eyes on these glorious figures there was not a moments hesitation and I bought both of them without even asking the price. I had a lovely chat with the purveyor of all this LEGO goodness and at some point it dawned on me that the gentleman I was talking to was non other than Guy Himber. Guy is responsible for one of my favorite books published by No Starch Press: Steampunk LEGO. Now I just need to work this connection into something fun, like creating seem kick ass photography for his awesome company.

LEGO has created a wonderful base for creativity with their mini figure, much as they have for their ubiquitous blocks. As 3D technology (and affordability) catches up with the incredible imagination that is at the heart of the LEGO community, I have no doubt we will be seeing more products like this available for sale.

Personally, as a photographer, I can’t wait to see what the fine folks at Crazy Bricks come up with next. As an artist, my mind is already working out what I can create to add to this amazing next wave of LEGO.

What are your favorite third party LEGO suppliers?

Do you have a favorite custom LEGO compatible mini figure you have purchased? If so who are they?

My apologies for the too dark photography, this is the first time the text has come before the photography. Seattle weather has been very dark and dreary as of late and it shows in these photos.

Oh my goodness those are lovely! I’ve been following SiP for awhile (every post a gem!), but this is the post that’s spurred me to comment. I’m very torn about third party items! Part of me is LEGO brand/product purist. I generally collect no other toy items, and I’m normally averse even to Lego items which are not in sealed packaging, either new or NoS. I keep all the sets I own boxed and separate; I am loathe to mix pieces from different sets. (A detriment to MOC experimentation, but our quirks are our quirks!) There are reasons; older sets… Read more »

Daniel! Thank you for taking a leap and commenting on a post. It is always nice to hear about other collectors experiences (and quirks). Like you I guard my LEGO mini figs and keep them separate and in pristine shape. I also have a series of sets that are all bagged and tagged for future play and posterity (specifically all the Harry Potter sets, final year, and a few other choice sets.) I also have plenty of sets in boxes I am loth to take out and build. I can enjoy them plenty were they are. :D I have seen… Read more »

I love the Mouse Guard heads and regret missing / not backing the campaign. I did back the Munchkin Bricks Kickstarter and Crazy Bricks did a great job with that one.

So I have to say it’s Crazy Bricks all the way for me.

I checked out all their Kickstarter projects. I had no idea they were the folks behind the crazy arms too! I will agree with you: Crazy Bricks all the way!!

Dark and dreary fits the industrial Steampunk theme well! You know my stance on 3rd party suppliers though, I’m a pure LEGO boy :)

Mike, I know you are a pure LEGO boy and I respect that. As you know I will do whatever it takes to get the photo, even carousing into that grey area. Thanks for your kind words about my photos. It is so hard to judge in the field and it really has been nothing but grey here. I need to learn to embrace the grey and drizzle! Shelly

I- I had no idea there were so many third party LEGO parts. Oh no, my poor wallet…

It only gets worse the farther you wade into the river. Hold on tight!!

Oh wow, working for credit and access is genius! Way to go! I love my skulls from Crazybricks that I found at 2014 BrickCon:

But being a rock-n-rollin’ kind of chick my favorite accessories are the guitars from BrickForge!

Your photos are amazing!

Leila, I thought of you when I bought a few skulls of my own. Well spotted my friend! They come in orange now, btw. There is nothing BrickForge doesn’t make that I wouldn’t buy. Ok maybe not the military dudes, but you know, everything else is awesome! The dream is working for access. I have some new images to show Guy, but I haven’t had time to write to him. So much to do and time is getting short! Thanks as always of your incredible support! Shelly xoxo

Yes! BrickForge has a ton of cool accessories, check em out! Especially the instruments… guitars of all colors/designs, violins, DRUMSTICKS!!!