Our Fair Play post from yesterday, highlighting the fact that The Awesome LEGO Systems A/S had sent their legal teams to Red Bubble with a set of claimed IP infringements on regular LEGO pieces created quite some reactions here, on IG, on bricked forums and reddit alike. Reactions covering the full spectrum ranging from great sympathy and annoyance with LEGO over the more neutral business as usual to the defenders of the right to protect ones IP. One recurring observation coming back was that sharing was not an issue, and that the problem was only with selling the art or as someone called it purchasable goods.

If you look back at yesterdays post we believe that it is not just about someone selling merchandise, and that the discussion goes much deeper on who owns the rights and that LEGO seems to be making a shift in their IP protecting policies here.

LEGO is only after those who sell their pictures.

While Red Bubble core business is indeed the sales of art and craft, they follow a similar user community model as Flickr and DeviantArt and actually Red Bubble does not force you to sell your work. You can perfectly share your work without the option of making postcards or poster prints available for purchase. And this happened to quite a few people on Red Bubble when Lucasfilm went after all the Star Wars fan art and sent notices to sellers and sharers alike, not making any difference between those who just shared their fan art (derivative works) and those who tried to sell it.

Red Bubble user Byron explains it pretty clear in his beginners guide to copyright and dmca :

” … It is a misconception that it is ok to upload derivative works without permission – so long as you don’t offer them for sale. The real issue is with the act of publishing the derivative works … and in this day and age “publishing = uploading to a website”

And Helen mentions exactly that, her work was taken down while it was just being shared, and not up for sale.

So this really brings us to the bone of the meat.

Is original classic LEGO copyrighted as a whole and using any brick or figure is violating the copyright of Big Inc. and anything we dream or imagine and build with LEGO is actually owned by LEGO Systems A/S and is to be considered derivative fan art of the brick company ?

Is a classic LEGO brick or mini-figure equally protected by the copyright laws dream makers like Marvel, Disney and Lucasfilms  enforce when they take down fan art of Spiderman or Darth as they vigorously protect their creative IP (and they do, they are in the first place dream makers, while LEGO was up to now a toy maker) ?

Can one imagine and make a unique piece of “art” (and then photograph it) of some classic LEGO bricks, studs or minifigures that is not subject to be considered derivative fan art of LEGO Systems A/S ?

So when Mark created his own LEGO fantasy character Goovy with a few LEGO pieces as an homage to Ash Williams (a series never licensed by LEGO as most probably to violent) and put this on Red Bubble after a retweet by the original actor did he then truly violate the copyrights of the LEGO Systems A/S ? 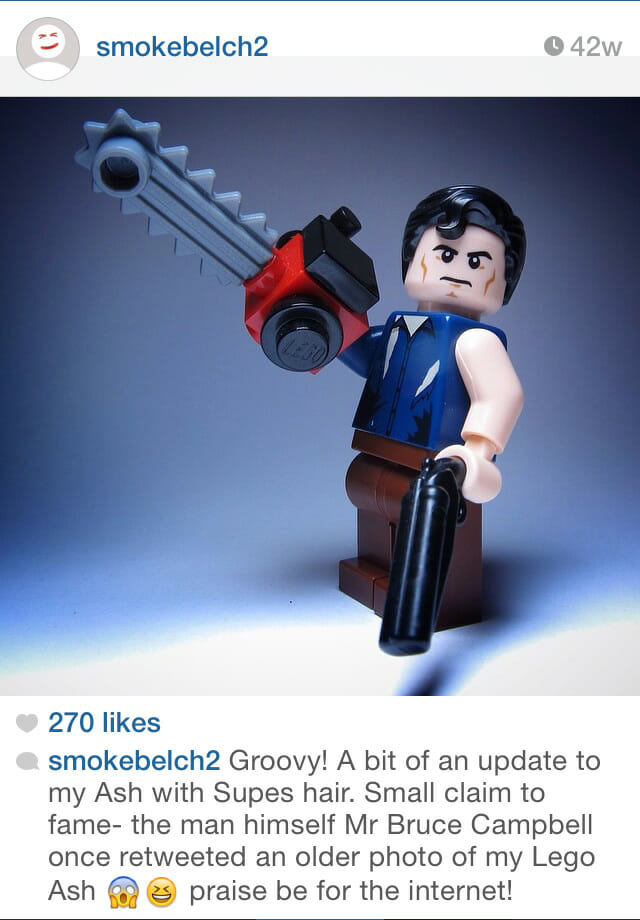 Is every mini me or alter ego actually owned by LEGO because this iconic piece of toys (the mini-figure) is trademarked and copyright protected and any derivative work is owned by LEGO. If you follow the letter of the claims that is what LEGO lawyers are enforcing here when they invoke the IP infringement letter against Mark at RB.

And here is another victim of yesterdays take down.
A bunch of pirates in a pool.
A photo taken by the fantastic storyteller bricksailboat called the Party Pool. 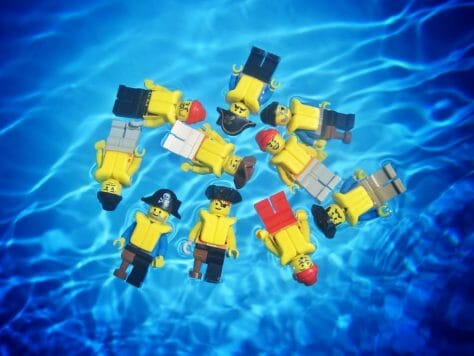 I can only see a creative mind taking a cool pirate picture that wants me to join the pool party and I would happily buy this postcard on RB to invite my friends over for a party in the weekend.

So, this whole take down is hopefully just a storm in a glass of water and will not go any further as the few cases we saw (and they should not ruin the fun, Big Companies may have a bad hairday as well) but we should not shy away from the discussion and push back to our beloved childhood toy manufacturer that we do want to continue to play with the toys and soup cans alike, and use them in our creative work and maybe even sell some of it on the way.

So I buy a lego set or minifigure. I paid for it do its mine. I take a picture of my property and possibly sell it, lego says I can’t because it’s theirs? Doesn’t make any sense to me. SMH. AFOL spends thousands upon thousands of dollars on lego and this is the thanks we get for loving their toy. Unbelievable.

Wow. So many thoughts. First of all, great article(s). It’s great to have a place to discuss toy photography, art, law, passion, commerce, bricks. What I hope might come from all of this is some clarity from LEGO Systems A/S in their fair use policy. I’ve read it. I read it three years ago, before I snapped my first picture of a minifigure. I read it again before I set up my Redbubble account. When my my first photo was taken down this week by Redbubble via LEGO legal I read it again. Another thing I noticed this week was… Read more »

Paul I feel your pain. I know you had me read the Fair Use policy ages ago and we discussed it. Like you I only want clarification from the powers that be so we know what the playing field is, rather than having to guess. Andrew told me I should just move to mini mates. They aren’t as cute but I bet Mega Blocks wouldn’t be giving me a hard time. They could use the advertising.

After commenting yesterday on the first part, I felt a little short on knowledge since I have not yet read the LEGO A/S Fair Play document yet. Thanks to the link in Me2’s original post, I now have. I am no lawyer and just have basic understanding of agreements (since I have read a couple hundreds of them for business reasons) :) Without any technical legal knowledge, I underlined one main article in the document that can apply to the situation in hand: “For any LEGO® trademark appearing on a page, the following disclaimer is appropriate: LEGO is a trademark… Read more »

I agree completely with you it may all still be a storm in a glass of water, but I also do believe it is a discussion we needed to have when you saw that pictures like the one of BrickSailBoat got taken down.

I am sure a big Awesome Mothership will continue to be Awesome and support unimaginable creativity !

I thought this might interest you – I contacted Lucas Films. I was not asking for permission, I simply asked, out of curiosity, what, in their terms, would constitute fair use of Star Wars figures in toy photography. This is the response I got: “Thank you for your email dated November 29, 2016 requesting authorization to use STAR WARS™ items, toys, action figures and any other proprietary elements from the Star Wars motion pictures in connection with your photography. Although we appreciate your interest, we cannot grant you the permission you seek. We receive many requests seeking permission to use… Read more »

Jennifer, This is awesome! Thank you for sharing this with us. I’m curious exactly what was the phrasing you used in your original question? Would you be ok if I used this (and the original question) as a basis for a part III? Shelly